The only way to properly tell this tale is by removing all your preconceived notions and judgements. So forget you’re you and let’s pretend you don’t know the end of the story. 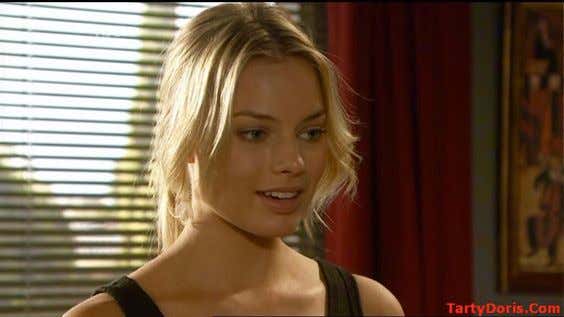 Instead, you’re an innocent, 18-year-old Aussie girl (aka Margot Robbie 10 years ago) and you’ve been dating your new guy, Alistair (should’ve been her first red flag), for three months. Everything seems fine, normal. You’ve only known him for a few months so you’re still getting to know him, but you’re looking forward to finding out more about him. So far, so good.

Then one night Alistair comes to you with a broken hand and some elaborate story about a fight he did not start. You’re immediately devastated for him – cursing the asshole who broke his hand – and, as a woman, you feel the need to take care of him, protect him. You don’t for a second consider the possibility that he’s lying because, why would you? He has given you zero reasons to doubt him and, now that he’s hurt and vulnerable, you’re not going to be the bitch that asks a bunch of suspicious questions. No sir.

But… he’s a bartender.

How will be able to work with a broken hand? He can’t. You know he can’t. Fortunately, you have a little extra cash in the bank, so you loan him $1,000 because he’s your boyfriend and it’s not like he can hide from you – you know where he lives lol.

Then you break up. Nothing extraordinary happens. There isn’t bad blood; sometimes people just break up.

As far as the loaned money is concerned, well, he still owes you $700, but you’re not too worried about it.

Except, you should’ve been…

He paid back $300, but soon cut off contact with her. Stranger still, Alistair’s friends revealed that his “furniture was gone, bed was gone, everything was gone” from his home, she said.

“The initial story was he’d gone to rehab in Queensland,” she said, adding that she hadn’t known him to be a drug user. That’s when she began to dig into his past.

“The moment we went, ‘OK, he owes everyone money,’ the anxiety and urgency of the situation ramped up,” she said. “The story was falling apart really, really quickly.”

Rehab? The guy’s a drug addict? I mean, that would explain the fact that he owes a bunch of people money, but wouldn’t you know if you were dating a drug addict? And if it’s not drugs and it’s not rehab, then what could it be?

That was when Alistair’s mom claimed he was killed, saying he owed some bike thugs money.

HE’S FUCKING DEAD! WHAT?!! How could you not know that? He’d been inside of you and now he’s in the ground? My God. You feel awful. You’ve been trying to track him down to get a measly 700 bucks, meanwhile he’s been dead this entire time. And his poor mother! She’s been mourning the death of her CHILD and you’re bothering her with questions about his whereabouts so you can collect a few pennies you let him borrow when someone unfairly broke his arm? Shame on you.

The only thing left to do is apologize and move on.

But two years later, Rachel was sitting in a local restaurant with a friend when she remembered that Alistair’s brother worked there and asked for a waiter to tell him to stop by their table. “I went, ‘I haven’t seen him in ages, and I’d like to say hi,’ ” she said.

The restaurant employee told her he wasn’t in that day, but informed her his brother — his only brother — was.

“I just went into shock,” she said, though she wasted no time in asking the waiter to bring him over instead. But he never came.

“Next thing I know, manager’s over [to ask], ‘Is there a problem here?’ ” said Rachel, who along with her friend was asked to leave the restaurant.

They asked you to leave the restaurant? Why? Because you asked to see your dead ex’s only brother and you were told he was not there, but that his “dead” brother was? Something seriously fishy was going on and there’s only one place to go when you need to find concrete answers:

“I was basically told by the police that it was my word against his that I’d ever even given him money,” she said.

Rachel even tried to call her audacious ex at the restaurant, but was told no one with his name worked there. That led to her receiving a text from Alistair’s mom, who accused Rachel of causing a “scene” and getting her son fired.

You know what? Sometimes you just have to let things go. It doesn’t matter if you don’t have answers, because it doesn’t look like you’re EVER going to get any answers. Once something becomes more trouble than it’s worth, you gotta let it go. After all, you only dated the guy for 3 months and it’s only $700.

Rachel again decided to let the matter drop — until a few years later, when she actually ran into Alistair at another restaurant in town.

“We made eye contact, and you could see he recognized me,” she said, adding that she bravely told him, “Long time no see!” According to her, Alistair responded, “Oh, yeah, it has been a long time.”

She got straight to the point by asking about her money, but he denied everything. Their chance meeting ended too quickly for her to ask for an explanation.

“If I’d sat down with him properly, yeah, I would have had questions,” she said. “One or two.”

Folks, you can stop putting yourself in Rachel’s shoes and you can happily go back to being yourselves, because, believe it or not, that is the end of the story.

What was the reason behind Alistair’s – if that’s even his real, terrible name – disappearance? Was it purely financial or was money just a tiny fraction of the long list of psychological reasons to disappear? Who the fuck knows.

Some people slip off the radar by mistake, others meet with foul play, and others disappear very deliberately, according to Steve Wallis, the Managing Director of SWI Recoveries and Investigation Group.

“It’s a slow process to totally disappear,” he said.

Mr Wallis is what is sometimes called a “skip tracer”.

In his line of work, he hears of people who will, for a fee, illegally facilitate that process by creating a new, forged identity.

He said only people with a very specific personality profile are capable of pulling it off.

So the next time a guy or girl ghosts you, maybe just be thankful they didn’t take your money and fake their own death instead.