When I woke up this morning, I didn't think the lovely theme song from Jurassic Park would make me think anything other than an incredible fictitious island where dinosaurs once again roamed the world. However, it turns out not only is that song a banger when being played on the silver screen as people eat popcorn, but it's a banger when being played on Stage 1 as people drop dollar bills. I'd love to ask John Williams if actually had high heels and thongs in mind when he composed this gem instead of brontosauruses and triceratops because it fits so perfectly.

Shit, you can even say the same about the costume. I know it has been around forever. But an inflatable T-Rex flopping around like a Barstool blogger doing the draft combine still gets a laugh out of me whenever I see it and now I will be feeling a whole other kind of emotion thanks to that video. T-Rex doesn't want to be fed. T-Rex wants to drop that thang and show you where dinosaurs come from*. 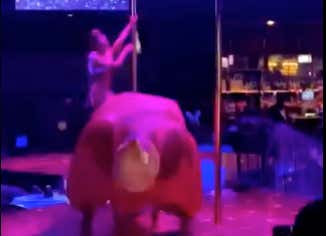 *Technically dinosaurs eggs, but lets not get into semantics here

I don't care if you are a freak or a prude. That shit is...something, depending on your level of kink. We can argue whether or not it is sexy. But it deserves credit for putting a spin on the sexy costume, even if it means I'll never look at Sharp Tooth the same way whenever I watch The Land Before Time.