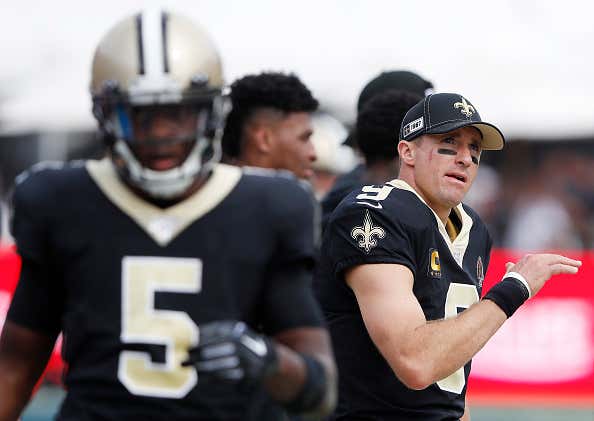 Don't take that headline and anything else I'm about to say as an indictment of Drew Brees. Or infer that in anyway I have an anti-Brees agenda. Randomly stop anyone in New England on the street and ask them to name three quarterbacks from the other 31 NFL they like and 100% of them are going to include Brees along, along with Jimmy Garoppolo and Jacoby Brissett. There's not a man, woman or child among us who doesn't recognize the Saints are the Patriots soulmates in so far as they understand what it's like to get burned at the stake in an NFL witch hunt. Or who doesn't root with cosmic abandon for a Saint-Patriots championship game because it will be two weeks of media coverage focused on it being the Fuck Roger Goodell Bowl. Just thinking of the Barstool t-shirt revenue alone is giving me a greed boner.

But still, I ask the question. Is Drew Brees a system quarterback? It's a term we hear a lot of around here. Usually in conjunction with another, um, mature veteran with a great coach who's set a ton of records and passed Peyton Manning on the all time Passing Yards list. A guy who also maybe doesn't have a reputation for being a naturally gifted athlete like an Aaron Rodgers or a Patrick Mahomes, but who nevertheless has won championships.

Not naming names, mind you. But just to cite a few examples:

I could go on but you get my point. The logic goes like this: The Patriots went 11-5 with Matt Cassel in 2008. The Patriots went 3-1 with Jimmy G and a rookie Brissett in 2016. Ipso facto it's not the man, it's the system. The fact that Garoppolo and Brissett are currently a combined 10-2 in the vastly different systems of Kyle Shanahan and Frank Reich notwithstanding, the fact they had a good record without Brady 11 years ago and for one month three years ago is all the proof we need, apparently.

Which brings us to the Saints, absent Drew Brews and with career slightlyaboveaverageocrity Teddy Bridgewater in his place. Bridgewater's numbers so far in his starts:

Bridgewater has made 34 career starts. Four of those Passer Ratings are among his top 14. His numbers on the whole are the best he's ever had. More to the point, they are winning with him and not Brees:

Which is the criteria to prove your starter is a product of the "system." Or so I've been told for 20 years. So based on this, and by the logic of the football world, Brees made it to the top of the all time Passing Yards list  and is a mortal lock First Ballotteer no thanks to himself. Thanks instead to him doing what he's told by his super genius head coach, being a caretaking game-manager who let's the metahuman athletes he's surrounded by do all the heavy liftin, allowing his perennially dominating defenses to carry him to victory, and simply trying to not screw up. Because anybody could do his job. Got it.

For the first time since 2003, Drew Brees is missing significant playing time. And in doing so, he's proving it hasn't been him all these years. And I appreciate it. Drew, welcome to the Systemhood.