In news that should surprise no one, according to Rob Demovsky, Aaron Jones was fined $10, 527 for “taunting/unsportsmanlike conduct.”

I mean, we all knew this fine was coming. This isn’t the NBA! They’re not about jazzing the game up and letting players express themselves in moments where they’re in the (end) zone. They juuuust decided to chill out on celebrations a couple of years ago, you can’t expect them to be ok with a player waving as he strolls into the end zone for his THIRD touchdown!

(To be followed by a forth, ICYMI.) 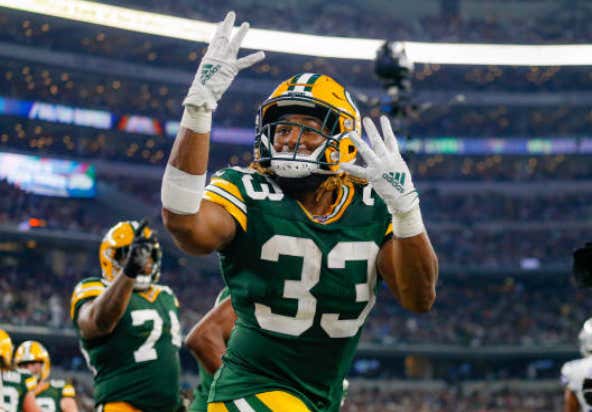 NOT fining him would just be way too reasonable and inconsistent with the brand they’ve worked so hard to build. The NFL can’t be associated with something *gasp* FUN!

It’s just unfortunate that Aaron Jones is going to lose $10.5k over it.

“I can’t say it was worth it, but the picture is a dope picture,” Jones said. “I can’t argue with that. I’m going to have that blown up one day in my house. I definitely got a nice picture out of it, but it hurts my pocket a little bit. I want that money.”

Pain is temporary, but glory is forever.

And so is this perfect pic.