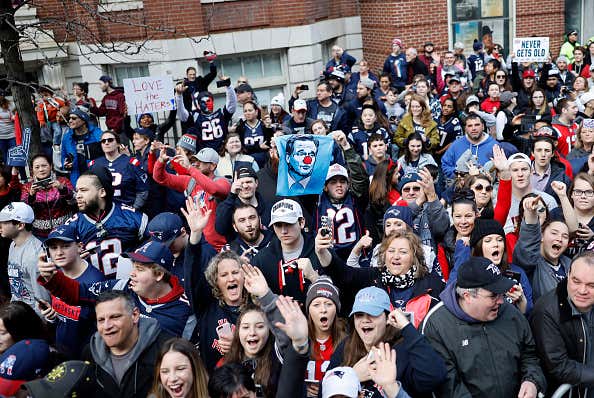 88% of participants in our latest FanPulse survey … answered that they would feel good about the direction the team is currently headed to. This confidence score is the fourth highest in the NFL behind only the San Francisco 49ers’ 99%, the Kansas City Chiefs’ 94% — the only two other unbeaten teams at the moment — and the Detroit Lions’ 91%.

However, the recent developments have still had an impact on Patriots fans: compared to last week, the confidence decreased by five percentage points and is now at its lowest since before the draft. Back then — with free agency losses, coaching changes and Rob Gronkowski’s retirement still fresh on everybody’s collective mind — “only” 82% of FanPulse participants had a positive perspective on New England’s development.

What fresh hell is this?

I can’t claim to know how this “FanPulse survey” works, whether it claims to be scientifically accurate or if it’s one of those meaningless ones like “4 out of 5 dentists surveyed recommend sugarless gum.” (Because naturally 20% of all dentists want to put you on the Buddy the Elf diet of candy, candy canes, candy corns and maple syrup on your pasta.) But I have to believe this is one of those self-selecting groups. Like a Twitter poll put out by a Jets fan site where 95% of them think Tom Brady deflates footballs and the other 5% hit the wrong button.

I mean, that has to be the case, right? I can’t bring myself to believe otherwise. That a 4-0 team that is +95 in Point Differential, that has given up one touchdown – a 4th attempt break-the-plane quarterback leap job at that – in their last five games going back to the Super Bowl, that has given up zero passing TDs while collecting 10 interceptions could possibly inspire lower confidence among their fans than the Detroit fricking Lions. Or lose 5% of its confidence factor because they won a tough division game on the road to a 3-0 team.

I say again, because there were warning signs of this awhile ago. I’d put it at a dozen years or so ago. Back when we were experiencing the early onset of what I was calling the Yankeefanification of Pats fans. When championships were expected, not valued. When every loss was taken as a personal insult, instead of a part of the natural order. When the stadium was half empty until deep into the 3rd quarter and so quiet visiting teams could’ve prepared by practicing in a library.

I’m talking about the time my brother Jack and I were cheering for a stop on 3rd & long – not swearing or being abusive, just making noise – and the lady in front of us turned around and shushed us, because we were being too loud for her. That’s a true story. Or the time of the Dolphins “Wildcat” game, when the Pats were completely overmatched, Miami did everything right, and they took a bad loss. The TV cameras focused on people streaming out of the stadium by the thousands, with plenty of time left in the 3rd quarter, booing as they headed for their cars. I should point out that was at the end of a 15-game home winning streak, including playoffs. And Matt Cassel was the quarterback. But so great was the sense of entitlement that the crowd didn’t mind look like ungrateful assholes if it meant beating the traffic.

This just better not be that. If losing (with all due respect) David Andrews, Stephen Gostkowski, James Develin and a few weeks of Isaiah Wynn and N’Keal Harry is enough to make 5% of New England lose heart, then 5% of New England doesn’t deserve the success they’ve enjoyed. It’s ridiculous to think there’s more faith in San Francisco which hasn’t won anything since the mid-90s and Kansas City, which hasn’t come close to winning since the Nixon Administration.

If true, then we are turning into a region of Veruca Salts. Which is why I can’t believe it’s true. And even if there’s an element of truth to it, it’s nothing that can’t be fixed with the next fake scandal or the next time someone claims the rules aren’t fair and that’s why the Pats win so much. That’s the kind of stuff we could always count on to keep this fanbase from getting complacent. Whether it’s allegations of bugged locker rooms and warm Gatorade or the Chiefs insisting the overtime coin flip is unfair. That’ll snap those alleged 5 percenters out of their funk and back in the fight. We’re long overdue for one.

In the meantime, let’s try to keep the faith in the team that’s No. 1 in the power rankings and have been all year. I know it’s tough. But I have more belief in my people than that 5% has in the 6-time champions, I guess.