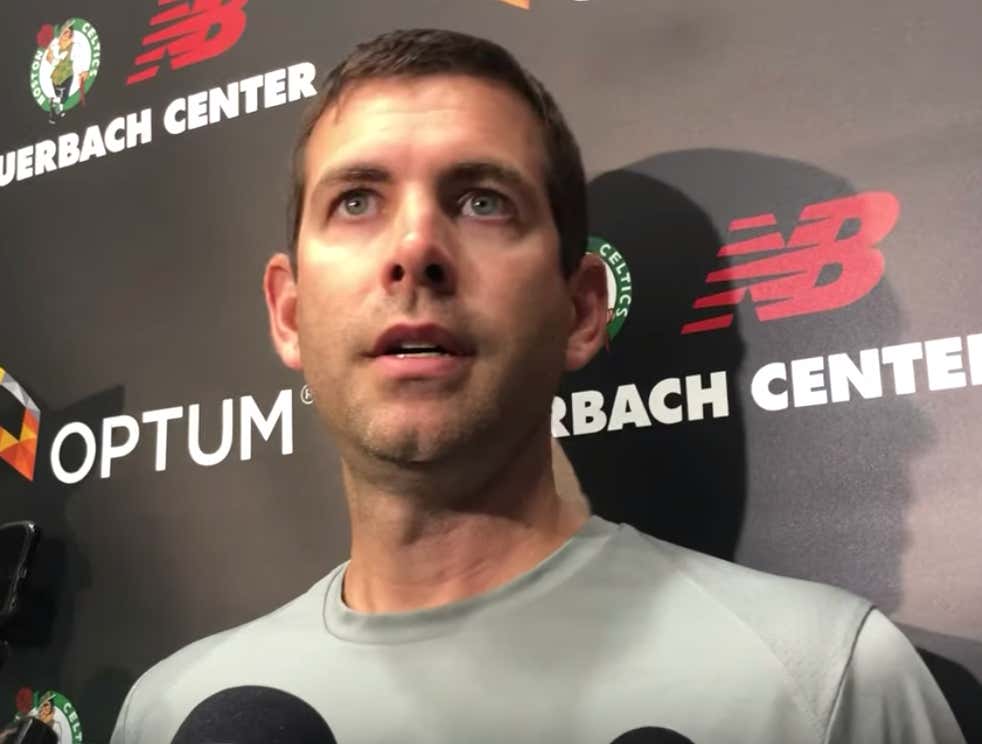 Coming off the hype and excitement of Media Day, once you get to training camp things start to get elevated to a new level. In today’s world you are bombarded with quotes and video clips and interviews on Twitter and it’s natural to start to get irrational when it comes to your favorite NBA team. Specifically with the Celtics, I think we’re all giddy to finally be done with last season and I know personally I am craving any and all content that is coming out of the Red Auerbach Center. So I figured with all the stuff out there why not bring it all together in one blog so you can make sure you have enough material for your alone time later this evening. It’s a different vibe this year so far, gone is the talk about walking to the Finals and winning titles and honestly that’s probably the best thing to ever happen to this group. We have a lot to get to so let’s dive right in

Cue the “big deal an NBA player is hitting threes in practice with nobody guarding him” hardos. Probably jealous Sixers fans that a young player is taking and making threes but whatever. You know who cares? Me. I care. You, a Celtics fan reading this blog, you may care as well. Look there’s no other way to say it, Tatum’s three point shooting dipped last season from 43% to 37%. While he may really live somewhere in the middle of those numbers, he talked about how his approach to next season are FTs and 3PM and with his 3PA rate slowly climbing from 29% to 30% last year, any sign of him looking flawless from this range is going to do it for me. Remember he did show signs of an improved three point shot while playing with Team USA before he got hurt, and him being a consistent threat from three is going to be a huge part of this offense.

I mean what more is there to say about Tacko? Right now he’s the leader in my hype clubhouse. He’s dunking on centers making them look like children, he’s blocking shit without jumping, I don’t want to say he’s a lock to make this roster but god dammit he should be. He’s done nothing but impress since the second he laced them up in Vegas in Summer League, and I just can’t see a team with this many question marks at center give up on what could potentially be a unicorn.

This was important for me because honestly this had to be one of the first times we saw Romeo Langford shoot. I feel like he’s forgotten about a little bit because he was out of Summer League with his thumb injury. Not only that, but how about Grant showing us that maybe his improved outside shooting we saw this summer may actually be a real thing? Wouldn’t that be a nice surprise considering that wasn’t supposed to be a part of his game coming out of college.

We all know Team USA ended up being a disaster, but you know why where they finished doesn’t mean anything to this Celtics team? Because the real benefit of those four being together was getting a head start building chemistry and having our young core players actually like their point guard. You listen to Kemba after Day 1 and that’s exactly what’s happening. Even threw a little love to Brad in there which was refreshing considering the issues we had with that last year.

I’ll be the first to admit Brad 100% knows what we want to hear and him talking about focusing on defense on Day 1 is exactly that seeing as how it’s maybe the biggest question of this entire team. Honestly this is just as big a season for Brad as it is for any of the players, so it’ll be interesting to see if any changes in his approach to get them ready for this upcoming season will actually pay off.

Of course there would be more Tacko. The Senegalese Dirk? Sign me the fuck up!! Who is blocking that jumper when it’s basically being released at like 9ft? I’ll admit, I didn’t love seeing him drop the ball so low, that’s going to get stolen every single time, but the touch? How can you not be intrigued.

Now this is interesting. So far all we’ve really heard about Poirier is about his rebounding and rim protection. This dude can take above the break threes and not look completely terrible? Even if it’s not a regular part of his game when the season actually starts, just having him as a threat from deep will be beneficial. There is so much unknown about this dude it’s either going to be another great European find by Danny Ainge or a complete waste of a roster spot. I wish there was video out there of this because I’m dying to see how he looked.

I’m not kidding with this Grant jumper man. He’s going to earn his minutes by being able to defend and playing smart basketball, but if this outside shooting is real it may change everything about how Brad uses him. He absolutely has the opportunity to really see the floor as a rookie and I feel like his success at this level needed him to develop this outside shot. Sure it’s practice, but 10 in a row is 10 in a row.

The early reports from our beloved rookies are all exactly what you want to hear. Sure part of that is a little fluff, but everything Brad is saying here sort of backs up what we saw over the summer. Carsen gets buckets, Grant is solid, they work hard etc etc. They came into this team and instantly helped change the vibe even as rookies and then once they showed they could actually play it went to a different level. Carsen is going to get the first crack at the backup PG/scorer off the bench in my opinion and he very well could end up one of the biggest steals of the draft. The dude is a walking bucket.

There’s no denying this was the biggest story of Day 2, and it’s not all that surprising that Enes Kanter is continuing to pander to us all. He’s fantastic at it and he’s been pumping Gordon Hayward’s tires for a few weeks now. Honestly nobody else on the team is saying a goddamn thing about Hayward and I think part of that is a learning from last season, but Kanter is not holding back one bit and I’d be lying if I said it wasn’t working on me. There’s been no video clips, no nothing, just Enes Kanter talking about how Hayward looks like the old Hayward and is going to shock the world. Boy do I hope that’s fucking true.

The good news is Hayward’s talking about how his body is 100%. That’s all fine and good and exactly what you want to hear after a full summer of being 100% healthy, but that’s not exactly what I truly care about. I don’t care about the ankle, I care about his brain. I need to know if his aggressiveness is back and if he’s not playing like a timid little bitch. That sounds harsh but that’s the reality of the version of Hayward we saw last season. He played scared. The mental aspect of his recovery was always going to be the final boss he’d have to concur, and if that’s the case then he should look a whole lot different once the real games start.

The ceiling of this team depends on how Hayward looks, so I would say this is fairly important.

And that should have you covered to where we are up until today. With the open practice this weekend and preseason games on the horizon it feels great to have this team back in our lives and actually be positive about them. Time will tell if any of these good feelings translate, it’s important to remember EVERY team at this stage is saying how awesome things are and how great everyone looks, but that doesn’t mean I won’t eat it up every single time.

Let me get some Jaylen/Hayward footage today and we’ll really be cooking with gas.