I honestly don’t even know how to summarize the series of events that transpired from roughly 3:30pm to 6pm tonight at Barstool World HQ’s, but I’m gonna try.

It all started around 3:30 as I was walking upstairs to go to a meeting. Some dude I’d never seen before was in the lobby and basically got right in my face and started talking to me as though I should know who he is. I actually thought he must have worked for us for a second. Then I thought it was just some bro who wanted a job. But it quickly became obvious he had an axe to grind. He actually followed me up the stairs like he owned the place and continued to try to talk to me. He was rambling on about how we posted something on Barstool and he was being catfished. Then he pulled out his iphone and started recording me and told me his lawyers were involved. It was becoming more confrontational every second and it was obvious he had no intention of leaving. That’s when I walked back downstairs and told our camera guys to come film it. So the last 2 minutes is what you saw. We had a good old fashioned film off. Him recording me and me recording him. Keep in mind once our cameras were brought out he got a lot more timid. It was almost like it never crossed his mind he was going end up on film. 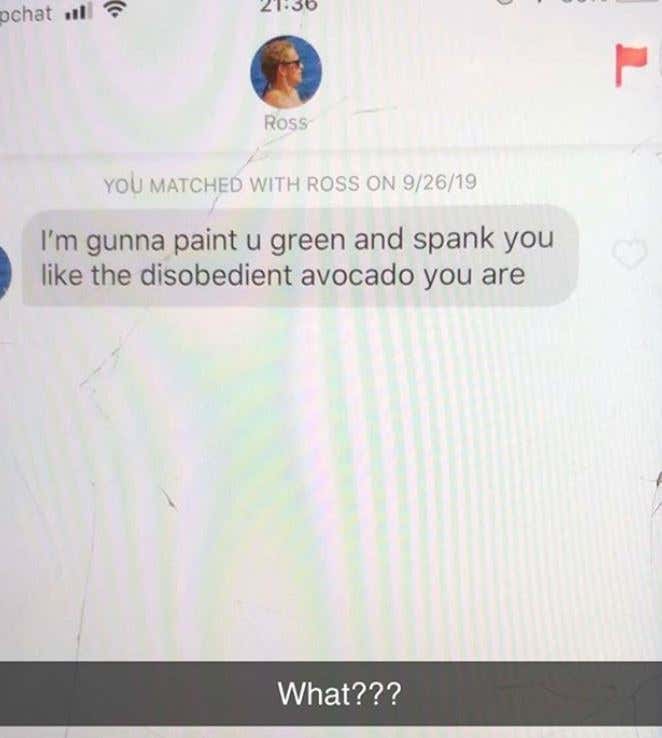 Now the question became was Avocado Ross just embarrassed because a girl sent us his tinder conversation and it went public or was he in fact being catfished? We spent the next 2 hours on Barstool Radio pouring through the facts and analyzing the data and we slowly discovered the shocking truth.  Here is a sampling of the detective work in real time.

The answer was none of the above. The man who stormed into our office and we believed to be Avocado Ross wasn’t Avocado Ross at all. We were able to track down the real Avocado Ross who lived in the Midwest and openly admitted he sent the DM’s and had all the pictures and proof to back it up.

So who was the guy who stormed into our office demanding I speak with him? He was just a random guy named Ross who lives in NYC and somehow thought he was being catfished by the real Avocado Ross in Illinois. The only thing he shares with the real Avocado Ross is the same first name. Apparently his definition of being catfished is somebody else on Tinder has the same first name and looks vaguely familiar to him. Keep in mind the profile picture in the tinder message is not the guy who was in our office. That’s just a picture of the real Avocado Ross. Nobody was ever pretending to be the guy who stormed into our office claiming he was being catfished. I know what you’re thinking. How did the Ross in our office not realize that the picture wasn’t him? To that I have no answer. He still barged in here acting like he owned the places blabbering about lawyers and being catfished. It would be like me saying I’m getting catfished because somebody else was using the name Dave on social media. It is such a wild turn of events I don’t even know what to think of it. I mean what type of madman bursts into our office, demands to speak to me, demands a picture that has nothing to do with him be taken down, pulls a video camera on me, and then seems mad when we record him all over NOTHING. I’ve literally never been more frightened and fascinated by one person in my life.

PS – The real Avocado Ross is an awesome dude.  He owned up to it right away and was just like “Yeah man that’s me.  Drunk night got away from me”   Also I kinda love the avocado line.  You got to separate yourself from the pack somehow and the girl did write back with a dancing avocado so it worked.