“I don’t get it. I’d love to be an offensive coordinator here. I have Odell Beckham, Jarvis Landry, Nick Chubb and there’s Baker Mayfield. Yeah, I know he’s overrated as hell.

Look, I bought into the dang hype. I’m like, ‘Oh, yeah!’ But not to the point where everyone’s saying he’s going to be the league MVP. Here’s a guy right now that’s a one-read guy, and then he’s going to improvise. He’s gotta realize that you are one of the slowest guys on that field when you take off with it. The ball’s not coming out in rhythm. He’s staring down guys, and you’re not that accurate down the field.”

And it’s Baker Mayfield, from over the top rope!

There are few things in sports as enoyable as a failed, retired coach turned TV personality stepping on the toes of a current (so far failing) coach. All too often these TV guys remain part of the fraternity. Where they wouldn’t say anything to make it awkward for one of their own if the CIA was waterboarding them. In some sports it’s unfathomable. Look at college basketball, where they’re all contractually obligated to say, “He’s doing an amazing job with this program and these kids” six times an hour or they get fined.

But Rex doesn’t play that game. Which is part of the reason he’s a national treasure. You’d never hear this out of a Tony Dungy or a Bill Cowher, even if they believe it. They’d die before they’d rip a Baker Mayfield and put Freddie Kitchens on the spot like this. God help any TV coach who said something like this about one of Rexy’s guys. And he knew an overrated, one-read, slow-footed, inaccurate QB when he had one. Or got a tattoo of his MILFtastic wife dressed as one. 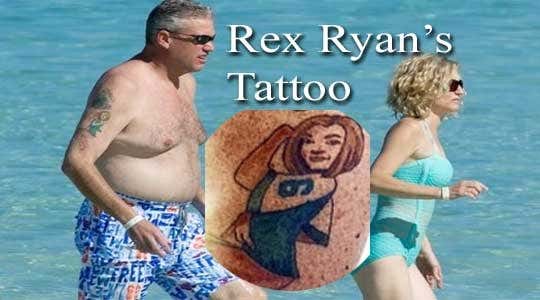 But the difference between him now and most of the ex-coaches who talked about his teams is that he wants back in the game. More than Cowher or Brian Billick ever did. Hell, even more than Jon Gruden did. Rex wants to be on the other sideline game planning Mayfield so bad he probably had to wipe the drool off his chins when the show went to break.