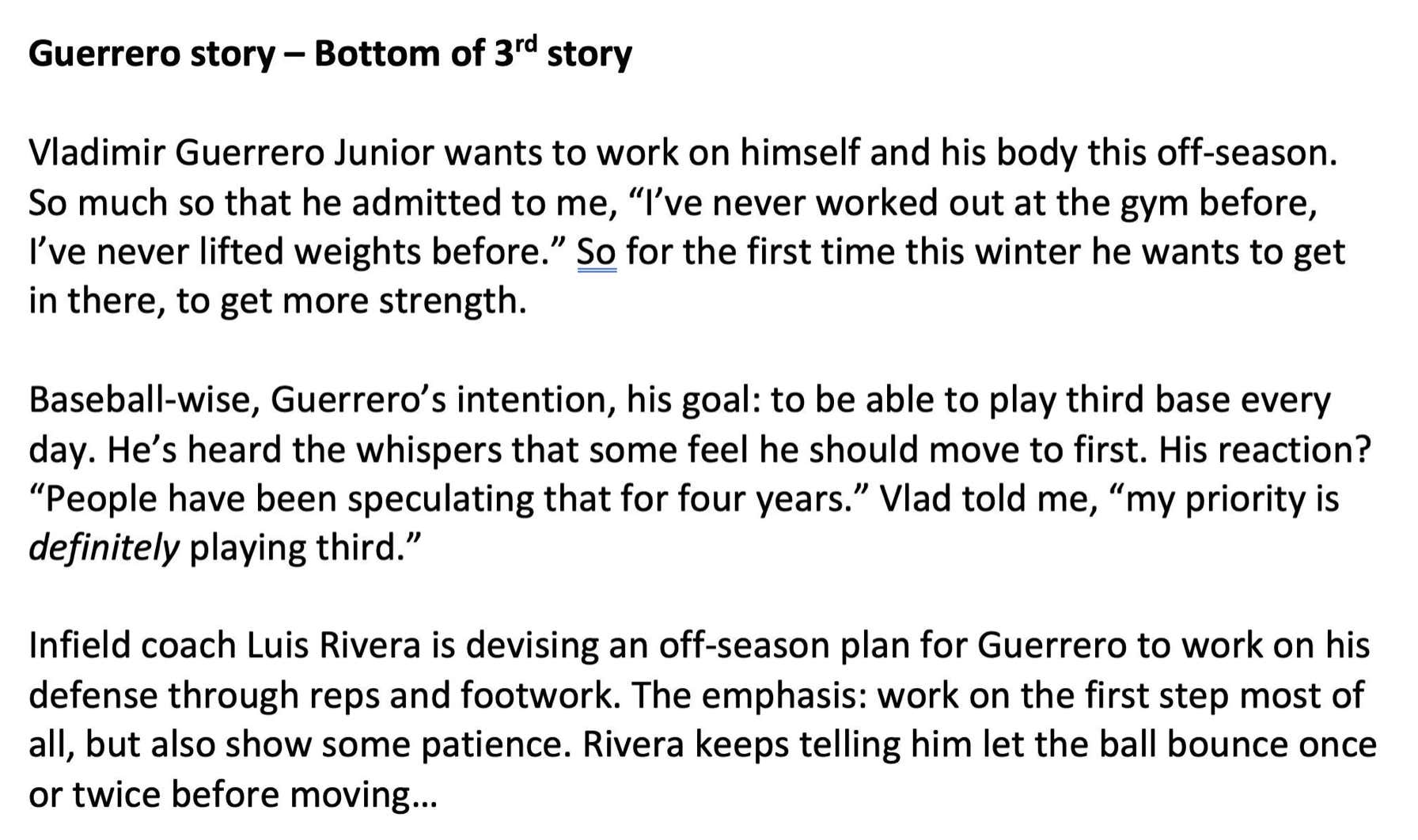 I almost respect Vladdy Jr. for never touching a weight before.  He ain’t lifting that shit.  It’s heavy.  You tell me why Vlad Jr. needs weight training when he can hit a 119 MPH baseball?

Weight lifting totally blows.  I get that.  But then again this kid’s only 20 years old and was deemed a super prospect who can’t miss, so he should probably at least do a little cardio or some shit.  Like 20 mins on the elliptical a day just to burn some cals, because he’s going to eat his way to DH sooner than later.

And when I was saying he can hit the ball harder than just about anyone on earth, I wasn’t lying.  This hit against the Sox early in the year came off the bat at 118.9 MPH, which is the hardest hit ball all year:

Just an absolute seed.  I’m surprised the ball in the second clip didn’t just stick in the fence.  One of the hardest hit baseballs I’ve ever seen.

But he’s also a lard ass.  I know it, you know it, everyone knows it.  I mean the dude is just thiccccc.  And apparently he showed up to Spring Training 40 pounds overweight:

Sure that’s just hearsay to an extent, but this video from Spring Training kinda proves Eck’s point:

Kenny Powers quotes aside and for 20 years old that’s…. not good.  That’s a 35 year old Miguel Cabrera-type body.  Someone who’s been PAID already and just riding out games to collect 100s of millions… not a 20 year old stud. It’d be different if he were just naturally thick and couldn’t help it, similar to Prince Fielder who was vegan and really worked on his nutritional habits, but he’s by his own admission, he just doesn’t do anything to maintain his body.  If he’s this thick now, then he’s on a bee line to 300+ pounds sooner than later.

And this will be the one and only thing to keep him from being great.  I mean, he kinda sucks defensively already as it is.  He has DH’d a decent amount already (not good) but he’s still got 17 errors on the year, good for 2nd most in baseball amongst 3B, and he doesn’t even qualify for the lead because he hasn’t played enough 3B.  All advanced analytics hate him defensively too.

Get your ass in the weight room Vlad!  He’s a good hitter now, sure, but he can 100% eat himself out of being a great hitter if he doesn’t watch himself.  His hands will slow a hair, his legs won’t beat out shit, and he’ll be subjecting himself to ticky tack injuries non stop.  Instead of hitting up the desert table mix in a salad or two.  Kinda pisses me off if we’re being honest.

And his quote is ridiculous at this point:

My priority is to definitely playing 3B

Well Vladdy, if you can’t bend over your waist and have no lateral range at all, that ain’t happening bub.  You’ll be DHing by the time you’re 23 if you keep on this path.  Hit the goddamn treadmill kid.

I’ll make this loud and clear: I think Vlad Jr. has the potential to be one of, if not THE best pure hitter in baseball in due time.  I’m talking a power/hit combo that’s on the level of prime Miguel Cabrera or Albert Pujols.  He seriously might have the fastest hands I’ve ever seen on a hitter.  He has 2 of the 3 hardest hit balls all year, per Baseball Savant.

PS – him never lifting weights in his life yet still having hands as fast as he does is mind blowing to me.  Legit incredible