Positional Overview: With three starting linebackers all taken in the first two rounds of the last five drafts, you might think I’ve got a screw loose for thinking LB is a high priority this year too. But people always laugh at unconventional thinking. They laughed at Copernicus. They laughed at Picasso. And they laughed at Movie 43. Well, no one laughed at Movie 43, but you get my point. And my point is that if there’s be one guaranteed way to exploit this Patriots defense, it’s been to throw on the linebackers. If I was trying to beat this team, I’d run 3 Verticles to draw off the secondary, then hit the tight end over the middle or someone coming out of the backfield. And I’d just keep doing it until someone proved they could stop me. Which they haven’t done since probably the time Tedy Bruschi lost a step 5 or 6 years ago.

Simply no one they’ve had at the LB spot has been able to cover people. Gary Guyton was that guy for a while. They drafted Tyrone McKenzie in ’09 and he didn’t pan out. They even tried to convert John Lynch, an experiment that lasted about 3 weeks of camp until Belichick sat him down and said “You’re a great safety, but a terrible linebacker” and cut him. There was hope (much of it by me) that Mayo would be that guy. But he seems to do everything well BUT defend the pass. So watching the Pats LB corp vs receivers these last few years has been a form of slow torture. Like watching a middle aged lady in a meeting rumaging through her purse trying to find her phone when it starts ringing then fumbling around trying to figure out how to shut it off. Only way more painful.

But there’s a second reason. And that is Brandon Spikes, who is coming up on the end of his rookie deal. I like what Spikes brings to the defense. I just get the feeling there will be a market for him that the Pats won’t necessarily be willing to match. Regardless, it’s a possibility he could walk, and this feels like one of those insurance policy moves where they take a guy a year before a key guy looks at free agency or retirement. Sometimes it doesn’t work (Ron Brace as the Plan B if Vince Wilfork left) and sometimes it does (Nate Solder replacing Matt Light). But I can see the Pats preparing to let Spikes go by grabbing his replacement now. Someone who can hit, fight off blocks, stop the run and most importantly, knock a freaking pass down that’s thrown by a QB other than Mark Sanchez.

So that said, this year I’m going with Chip Kelly’s point last week that the line between 3-4 vs 4-3 and inside vs outside LB is blurring beyond all recognition and for the purposes of this I’m lumping all LB’s into one breakdown:

Outside Linebackers That’re the Freakishly Athletic Edge Rusher Types That Give Draft Pundits Throbbing Erections and Come Off the Board in the Top 10 Every Year:

You could argue Jordan is more of a traditional hand-on-the-ground defensive end than a Sam LB. And judging by where a lot of scouting blogs have him, you’d have company. But it makes more sense to go with Chip’s philosophy on this one since the Ducks basically made up a hybrid role for him. He rushed mostly but dropped into coverage a lot too. Surprisingly for a guy of his size he didn’t PBUs. He’s a quick twitch pass rusher who by all accounts needs to add sand in his pants once he’s not going up against Pac-12 tackles every week. But I don’t know, something about all that “tall, lanky” talk screams “higher rated Shawn Crable” to me.

The leader in the clubhouse at the Best Name in the Draft Invitational, Mingo is even more of a DE edge rusher specialist type than Jordan. He’s got arms like pool skimmers at 33.68” to disrupt passing lanes. He’s also got the legs of those Imperial Walker things the Stormtroopers rode around in on the moon of Endor. So the cliché is to compare him to an NBA small forward or a ganglier Bruce Irvin of Seattle. For the 13th year in a row, the local football writers are screaming for someone like Jordan or Mingo. But I don’t see any reason why the Pats wouldn’t be happy with Chandler Jones and Ninkovich. It’s a moot point since it would take their whole draft to get into the range these guys will go.

Months ago he was considered an elite talent, but his stock fell like Facebook’s over questions about his work ethic. Scouts expected that he’d fall on is face at the Combine, but he proved them wrong by skipping it. He proved them right however at Georgia’s Pro Day by posting that awful 4.9 40. His game tape shows moments of brilliance (2 sacks and a FF vs Alabama) followed by moments of weakness (Bama running right at him). It’s common to compare him to Von Miller in that he’s quick enough to come off the edge and be a pursuit tackler, but taking on blockers… not so much.

Last year, Tampa took a 2nd Round shot at an undersized, uber-achieving linebacker, Lavonte Davis of Nebraska. He rewarded their faith with 139 tackles as a rookie. That’s what some people see in Brown. If he had a couple of more inches on him, he’d be a shoe-in mid-1st Rounder. But they say you can’t measure heart. Though I read today the heart of a blue whale is the size of a VW Beetle. That’s got nothing to do with Arthur Brown’s pro prospects, I just think it proves you can measure a heart, you just have to be willing to take some drastic measures. And then the guy’s no good to you. Anyway, GM’s were impressed with Brown in his Combine interviews and his good sense to transfer out of Miami (Fla) as a sophomore. Greene is an interesting possiblity for the Pats. He’s a former safety who converted to chase (ie Will) LB in 2011 and led the Big East in tackles with 141. He suffered a gross ankle injury on the rock quarry that is the Yankee Stadium infield playing the Pinstripe Bowl, but rebounded to lead the conference in tackles again. Size is obviously an issue and since he’s already rock solid his frame probably can’t put on much more bulk. But he’s got the straight line speed, athleticism and experience to be an intriguing fit as a cover backer. He’s projected to go anywhere in the 2nd to 4th Round. Hodges is a Day 3 prospect. That 40 time he posted at the Indy Dog & Pony Show isn’t going to make him a rich man. And he chose not to run it again at his Pro Day. But he did perform well in the agility drills like the Short Shuttle (4.25) and the Verticle (35.5). Still, his strength is the intangibles. You hear a lot about his instincts and head for the game. And the biggest thing of all: the way he stepped up as a veteran leader of the Nittany Lions and he stuck it out at Penn St during a time where the words “he stuck it out at Penn St” weren’t something to be admired. It’s not a stretch to see Bill O’Brien talking Belichick into taking a flyer on the kid if he’s still there in the 5th.

Your Only Real Inside LB Prospects Getting 1st Round Grades:

You’d think a Heisman finalist and the undisputed leader of a 1-loss team would have zero questions about him. But he couldn’t have been harder to find in the title game if he hid under a boat cover. Then he posted a terrible 40 time in Indy. I guess there’ve been some off-the-field issues too? Well to me, he’s still the inspirational hero who played through the emotional pain of losing the woman he loved. Like Costanza says, it’s not a lie if you believe it. (Note: I’m schizo on this pick for the Patriots. On the one hand he had 7 INTs last year. On the other hand, it will be a circus. On the other, other hand, who doesn’t love the circus?)

Another guy where you can’t get through the first sentence of one of his proficles without finding the word “instincts.” Also “cerebral” comes up a lot. He doesn’t overpower blockers as much as he sheds or eludes. He’s one of those guys who’s around the ball a lot as 130 tackles with 15 TFL, 4 sacks, 5 PBUs, a forced fumble and an interception would suggest. But that’s where the “instinct” stuff comes in. He’s doing it with smarts and good angles, not his feet. That’s the 40 time of Carl from “Up,” not a 1st round ILB. 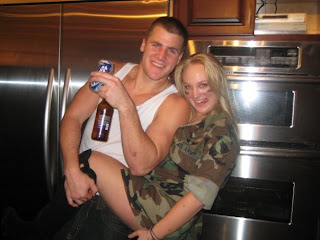 On the field, he’s basically a Brad Marchand type: an agitator who plays to (read: beyond) the whistle and the kind of pain-in-the-ass that opponents hate. Away from the field, the police don’t find him to be any box of chocolates either. In 2010 Chip Kelly made a big announcement that Oregon was cracking down on players getting arrested. Alonso responded by [wait for it…] getting arrested. That very day. On an OUI charge. Then in May of the following year he got arrested for burglary, criminal mischief and criminal trespass. Of course the Pats haven’t been shy about having known violent criminal offenders on their defense lately, so there’s no ruling him out.

A Potential Mid-round ILB Apple Off the Belichick Coaching Tree:

I’ll be quick on this one: Johnson is a stout, powerful, run stuffing thumper who projects as a 3rd rounder. But his weakness is the passing game. The Pats have already drafted two more talented Nicos already in Hightower and Spikes. Nothing to see here, folks.

Depending on whom you talk to, Ogletree is the best ILB or the 3rd best OLB prospect in this group. More importantly, he’s a former safety with Stretch Armstrong arms and great closing speed that makes him the consensus best pass defender among all linebackers. He can also deliver the kind of violent hits that give Roger Goodell the night sweats. He’s had issues like an OUI arrest and a positive drug test that got him suspended for four games, which I was hoping would make his stock drop. But no dice. I defy you to find a mock draft where lasts to the Pats at 29. He’s not only the perfect Patriot, he’s the perfect Bear, Saint, Bengal and Saskatchewan Roughrider for that matter. Unless there’s a pleasant surprise, it’ll take a package of picks to go up and get him and I don’t see the price being worth it.

Bostic was heavily recruited coming out of prep school but Belichick BFF Urban Meyer landed him and did not regret it. Bostic was their best young defensive player in ’09, had 3 INTs in 6 games the next year and led them in tackles in 2011. His numbers dropped off last year but he hasn’t lost his reputation as a tough, physical missile (just check out the :45 mark of that video) who’ll blow up blockers between the tackles. There’s some disagreement as to whether he’s an ILB or OLB, but again, that means nothing. And there was some question about his speed until he ran so well at the RCA Dome Olympics. He also posted a sub-7 3-Cone Drill which the Pats love. There’s no question him in the pass coverage, as he’s probably second only to Ogletree in that department. He’s a 4-down player who could probably benefit from a year of playing a passing down specialist role. And Bostic is always described with the two words that are guaranteed to warm Belichick’s permafrost heart every time: “vocal leader.” They could easily get him with their 2nd Round pick, and possibily even drop down into the mid-3rd. Jonathan Bostic to New England.