Call me a simpleton, but I laughed at that tweet. The truth of the matter is that I DESPERATELY want the “Stan is a clown” narrative that I fed/invented last year to die. I don’t want Stan to fail. I want the Hawks to be good and for that to happen, Stan has to get a few moves right. He has three recent moves that were at least somewhat controversial that his future employment is tied to and through one game of the preseason two of them are looking pretty good.

I am a noted Adam Boqvist skeptic, but it’s impossible to watch this highlight without a little bit of blood rushing to your penis. The whole thing. The the aggressive skating and read to get to a 50/50 puck, the quick stick to pop it away from the defender, soft hands to settle down and corale a bouncing puck that was waist high, and then the FUCK you snipe from the bottom of the circle. The entire thing was beautiful. Bowman announced that Boqvist is officially turning pro this year. No more London Knights. Does that mean NHL? I’d say probably not.

Those are 8 names with NHL contracts right now. Maybe deHaan starts the year on IR and the Blackhawks scratch a combo of Koekkoek, Maatta, Seabrook, and Dahlstrom to start the year to give Boqvist a look. That’s probably the only way he “makes the team” out of camp unless the Hawks are comfortable trying to slip Dahlstrom and/or Koekkoek through waivers and scratching a veteran(Seabrook) on a consistent basis to get Boqvist in the lineup.

I thought Boqvist was “just okay” to borrow a phrase from Joel. The things he does well he’s already at an elite NHL level. The skill, skating, vision, and that lethal LETHAL shot. It’s all the other stuff he needs work on. Defending in the zone and making good reads in transition defense.

It’s do or die time for the Hawks. No more hurt feelings. They need their best 20 players in the lineup every night because Stan can’t afford to miss the playoffs again and the margin for error is so thin.

You could argue that the Jokiharju-Nylander trade doesn’t happen without Boqvist being in the pipeline. From an organizational depth/balance perspective that trade had some obvious logic even though people hated it. The reason people HATED it was because Jokiharju is theoretically NHL ready now at age 20. He was a top 4 guy last year under Joel Quenneville before being banished and then traded by Stan and Colliton.

If Boqvist isn’t ready for primetime NHL minutes and is roommates in Rockford all year with Alex Nylander while Jokiharju is a top 4 guy in Buffalo right now AND the Blackhawks miss the playoffs again, well that smells like the last nail in Stan Bowman’s coffin. There’s SO much riding on that Nylander-Jokiharju trade, at least from an outsider’s perspective. Luckily for Stan, Nylander looked like a kid ready for the NHL last night.

I’ve said it 100 times this summmer but I’ll do it again now. There are spots open in the lineup. Good spots. The type of spots that if you win them and do well you’ll be given generational fuck you money.

(Chance At Fuck You $)-Toews-Kane

If Nylander can win one of those wing spots and cash in then he’s rich and the Hawks top 9 suddenly is slotted pretty well. If he can’t then Stan will be wearing his indigestion face all year waiting to be called into John’s office 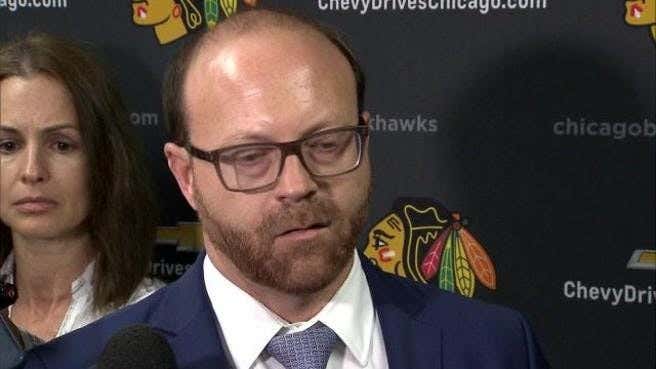