I was farting around on Twitter the other night as I’m wont to do and stumbled across a Tweet or two mentioning the return of the greatest single-panel comic ever put to newspaper, The Far Side.

So instead of doing that thing on Twitter where you ask the person who posted the Tweet a question and possibly getting a reply in an hour or maybe never, I took two seconds to Google “The Far Side” and got my answer immediately. (You should try it, it works great.) 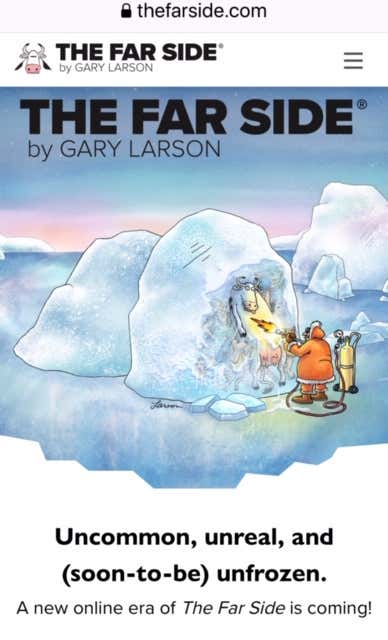 The Far Side was a syndicated comic that appeared in almost two-thousand daily newspapers throughout the ’80s and into the ’90s and was more often than not, the best thing you’d see in that day’s paper. Creator Gary Larson created a strange world of his trademark aliens, cows, ugly kids, fat fucks, and others that poked fun at the many absurdities of life, sometimes macabre, sometimes ironic, but always funny. This wasn’t that aloof asshole cat Garfield or your parents’ boring-ass Peanuts (seriously, Charlie Brown TV specials were the fucking worst when you were a kid). The Far Side was fresh, different, exciting, and, best of all, fucking hilarious.

Given the amount of detritus pop culture has burped up over the last two decades, the idea of The Far Side might seem quaint by today’s standards. But newspaper comics had never quite seen an edgy and occasionally strange addition like this and it proved wildly successful. Soon enough, Larson was selling millions of copies of book collections, calendars, and whatever else would fit one of his unique takes on the human condition. (I’m just now feeling severe regret for not salvaging the dozen or so Far Side books I had to let go of when I downsized. These fuckers were 30-35 years old. Still, throwing out 95% of your shit that you’ve been dragging from cellar to cellar for decades is pretty goddamn liberating.)

I honestly was surprised to look it up and see that the strip lasted until 1995. I don’t remember if the quality dipped or I became disinterested as I became more of a drunken college hornball or what. But I can most definitely remember being a pre-teen kid, walking into a store, going to the newspaper rack, opening a (now-decaying) Boston Herald, flipping to the comics, reading that day’s The Far Side, laughing my balls off, putting the paper back, and then leaving the store. (Suck on that, Mom and Pop.)

If there was one thing I did every day (pre-masturbation era), it was to make sure I read The Far Side. So needless to say, I’m curious to see what 69-year-old Gary Larson comes up with after such a long break, particularly given the amount of fodder that’s been made available since he last dipped the quill.

Given some of the cultural reprises we’ve seen over the last handful of years, I’m tempering my expectations. But hopefully it’s more IRON MAN and less LAND OF THE LOST. Either way, I wait with dinosaur cigarette bated breath.