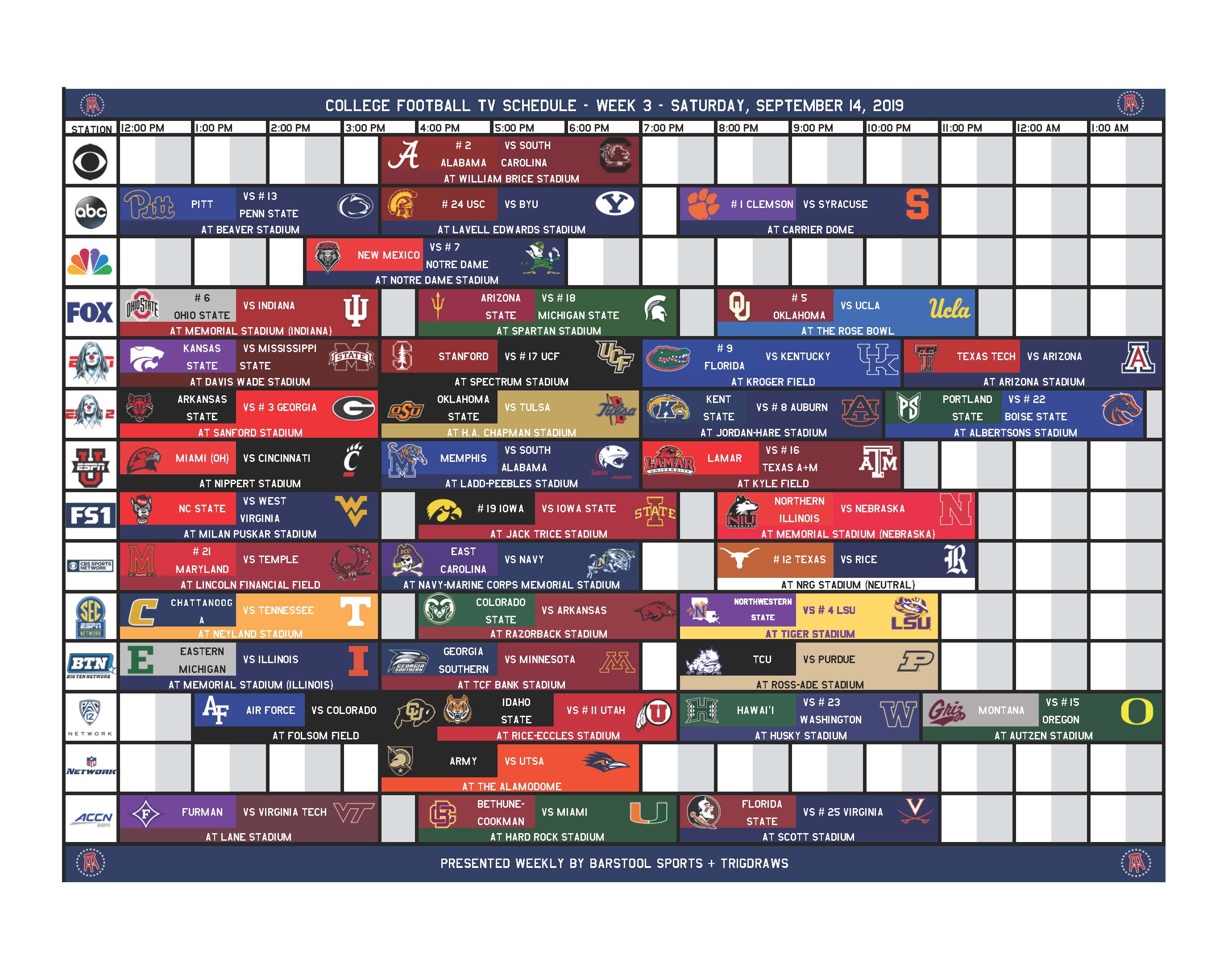 If you are in New Jersey and looking for a book to bet with this season, check out PointsBet.com.

You can sign up with the code BARSTOOL to get started, and if you deposit $50, they’ll give you a $100 in Bonus Bets with no turnover requirement!

Keep an eye for PointsBet in the College Football show this weekend and for their Personal Pay Dirt promo: You place a spread line bet on four college football games that we select here at Barstool. For every touchdown your team scores, you get $6 in bonus.

AND, if you’re not in New Jersey, you can play PointsBet’s Pick6 game online, where they’re giving away up to $25,000 a WEEK. All you have to do is pick six football teams you think will win that week. You can go to pointsbetpick6.com to play.

Betting Process: For week 1-4, I create my own lines using my preseason projections which are a combination of 2018 results, 2019 returning production, recruiting rankings, and coaching staff rankings (HC, OC, and DC). I then compare them to the vegas lines and anything that is off by 5+ points, I bet. It’s a new approach, that I’ve found success in while backtesting in the offseason. I bet throughout the week and post them on Twitter if you want to keep along.

Looking back on plays so far this season, I have found I’m 1-6 on games where I bet on teams with a new head coach. This makes sense considering my 2019 preseason projections, which I am still using, use a fair amount of 2018 data in them. A team is going to perform much differently under a different head coach. This is the first year I am using this model and I am finding some kinks in the system.

The 1 win came via Houston. This makes sense considering Dana Holgorsen is an upgrade over Major Applewhite. Tonight he has Mike Leach coming to Houston and are a 9.5 point underdog. I’ll be taking those points.

As Big Cat has pointed out, when Dana Holgorsen has his QB, his offense is going to put up points. Washington State’s defense currently ranks 61st in FEI and 60th in SP+. Houston’s offense, which ranks 25th in FEI and 38th in SP+ will be able to score with D’eriq King, who ranked 4th in ESPN’s QBR in 2018 (hasn’t played enough FBS games in 2019 to qualify).

I am concerned that Houston’s defense will be exposed similar to how they were exposed against Oklahoma. They rank 91st in FEI and 99th in SP+. I still like the home dog tonight.

I tweeted earlier this week that I will be on Mississippi State:

Tommy Stevens was injured during last weeks game, but all indications are that he will play and be close to 100% healthy.

Barstool fans are a bit biased against Mississippi State after Brandon “Guarantee” Walker gave out them -18 against Louisiana-Lafayette. They were up 20 in that game in the 4th and everything pointed towards a cover until they took their foot off the pedal. Last week they covered against Southern Miss and all models have them as a top 15 team (13th in SP+, 8th in FEI). This is a very good team that I expect to make waves in the SEC.

Kansas State has had a good start to the season, but let’s not forget who it was against: Nichols State and Bowling Green. Last years game was a dominant performance in Manhattan by Miss State, a 31-10 victory. Mississippi State outgained Kansas State by over 300 yards on the road. I expect the same thing this week.

This is going to be a scary game to bet, but I will be on South Carolina +25.5. The season started off in a bad way with a loss to North Carolina, but the energy in Columbia has been revitalized thanks to Jake Bentley being replaced by Ryan Hilinksi at QB.

Do I think South Carolina can win this game? Absolutely not. I do think they can keep it within 3 scores, especially at home. ENTER SANDSTORM:

I hate to do this, I really do, but I’ll be going against Oklahoma State in the T. Boone Pickens game:

This is a massive look ahead for Oklahoma State with Texas next week. Add in that they are on the road. Give me Tulsa.

This is a completely different game from what we saw in Tempe last year, however, are we sure Michigan State is going to be 18 points better than Arizona State just a year later? I’m guessing not, even with the difference in setting for the game. They are going to leave it ALL on the grass this weekend:

California is coming off their biggest win in years. I guess you could argue that their win against USC last year was bigger, but beating a #15 ranked Washington on the road is a bigger deal than a 5-7 USC team.

They do not have an easy game this Saturday against North Texas. Mason Fine and Seth Litrell are coming and looking to take down a power 5 team.

I may be off on my assessment of the Mean Green at this point in the season, but I think they have the weapons to put up enough points to cover 14 against a lackluster offense in Berkley.

Their win against Tennessee was great, but I still think we are overvaluing the Georgia State Panthers a bit too much. Georgia State still ranks 114th in FEI and 110th in SP+. They are on the road here against a Western Michigan team that I expect to make some serious noise in the MAC this season.

Give me ALLLLLLL of Dino Babers as an underdog at home against Clemson.

Everyone was too high on the Orange heading into the season this year, however, I love them in a classic “no one believes in us” scenario. That’s where Dino Babers strives.

Hopefully, the chosen one (Tommy DeVito) shows up. He’s going to need to.

This may be my favorite play of the weekend. Washington is going to take it STRAIGHT to Hawaii.

The Rainbow Warriors are a different team off the island and their offense will be stopped by Washington’s top-25 defense.

Last weekend was a tough loss for the Huskies, but there is nothing to suggest that Hawaii’s defense is anywhere NEAR Cal. Hawaii ranks 119th in SP+ defense and 116th in FEI defense. I see a huge weekend for Jacob Eason. 49-20.

I hate it, but I will be on FSU. I still think they can put it together. I still, for some reason, believe in Willie Taggart. Getting a full TD against Virginia is too much to pass up. FSU is 34th in FEI overall ratings while Virginia is 44th. Give me the Noles.

For some reason we still overrate Nebraska. This isn’t the team we thought it was going to be. They are far off from a darkhorse national title contender. They may even be far off from competing for a Big Ten West title.

I completely disagree that they should be a 14 point favorite against a Northern Illinois team that showed they could stay in a game with Utah.