If there’s one thing I’ve learned about the internet and blog life, it’s that you never know where your next feud is coming from. Sometimes you write a blog about blind parents not being good parents and next thing you know you find yourself embroiled in a 6 year battle with an entire sect of physically handicapped people. Sometimes you write a random blog about Ariana Grande and Big Sean and a couple months later you’re in a rap battle with some hoodrat and your boss. But the real sweet spot…when you know you’ve really stuck a chord…is when you have entire nations coming after you.

I got my first taste of International Digital Warfare with Honduras in 2013.

So the US Soccer team lost yesterday to fucking Honduras. They’re like the worst team in the United States’ group and now we gotta play all the good teams and we might not even make the World Cup or some shit. Fucking Honduras! I think I “sponsor” their goalie for like 60 cents a day!

Then there was the little spat with the Bahamas during Fyre Fest. Honestly that was more like a little street scrap than it was full blown warfare. I feel like I just kinda carpet bombed them real quick and it was over in like 24 hours. I couldnt even find many of the tweets but I know I ended up Cunceling Da Bahamas.

But both of these spats, and really all of my twitter wars in general, have been leading up to this feud. Every combative tweet I’ve ever sent…every death threat I’ve received…every troll I’ve ever executed was in preparation for my battle with Serbia. I didnt know it at the time but it was all to prepare me for a showdown with a war torn, genocidal Eastern European nation with an ENORMOUS chip on their shoulder. The blindos, the Hondos, the Real Life Super Heroes, The Unicyclists, Jamie O’Grady and the Al Jazeera readers, all the way up to Lebron stans just a month ago…all of that was simply the undercard to the heavyweight showdown. Thousands…and I mean THOUSANDS of Serbs have been flooding my timeline for 8 days now, with no sign of slowing down. Right now this feud is like the oil that lit the menorah in the Temple in Jerusalem. 8 days and 8 nights and the fire is still BURNING. And it all began with one simple tweet:

Plucked straight from my playbook, it was a throwback tweet for the OG fans. A little nostalgia play to drum up some old memories and reminisce about the glory days of Barstool. When Twitter wars were borderline scary because you thought someone might actually pull up in the flesh. Straight from 2013:

Well turns out the Glory Days of Twitter Beef most certainly arent over. And more than ever I’m starting to get a little nervous that someone might actually pull up on me. Run up on me at the light, I could lose my life! The number of tweets I’ve received from Serbians, a people best known for starting World War I and a whole lotta genocide, has to be in the tens of thousands. I feel like 2 or 3% of the entire population of Serbia has tweeted me at this point. But this morning it all came to a head, 8 full days after I assassinated their country on the Powder Keg that is Twitter, sparking a massive, full scale, Internet War. As I was walking to work, I received this tweet:

Which is particularly funny because:

I mean Jiminy fucking Cricket how far will this thing go?? I feel like they are discussing me in Parliament over there in that shithole. Like they convene in the morning and they are like, “ok things on the agenda:”

2) discuss the next target of Serbian genocide

Which is a good thing. Very important that they come up with a new approach. Because currently all Serbians do is tell me that American food has too many GMOs:

I don’t know what GMO’s are but I’m sure they are delicious as fuck.

They send me pictures of their food, to dispel myth I’m spreading that they dont have any food:

Because everyone knows that if you take seriously a joke about an entire nation not having any food, thats the best way to look like you’re a real, first world, thriving country. Even their goddam US Ambassador went right to their tired ass script:

And they rely HEAVY on the crutch that Nikola Tesla was a Serb. Like, A LOT. Everyone in Serbia at this point has said “Nikola Tesla invented electricity” which cracks me up. You goddam idiots. You cant “invent” electricity. Thats like saying Sir Issac Newton invented gravity. Plus, I think Croatia would like a word 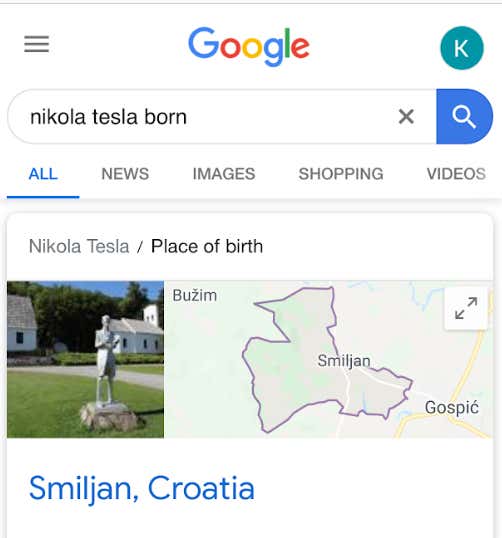 Also, I dont know if you want to be touting the dude who did all the work designing Alternating Current and harnessing electricity’s power, but gone none of the credit. Along came Tommy Edison who shoved him around the ring and took all the credit. Tesla was like the nerd who does all the work in the group project and Edison cruised his way to an A while smashing Tesla’s crush. Big Benny Franks with his syphilis dick was more important to electricity than Tesla. Nikola aint nothin but another Eduardo Saverin.

But I do have to give the Serbs some credit. They are a worthy opponent. An adversary not to be taken lightly. They are persistent and refused to back down. Probably from all the practice they have ethnic cleansing. Some gems from Serbian Twitter: 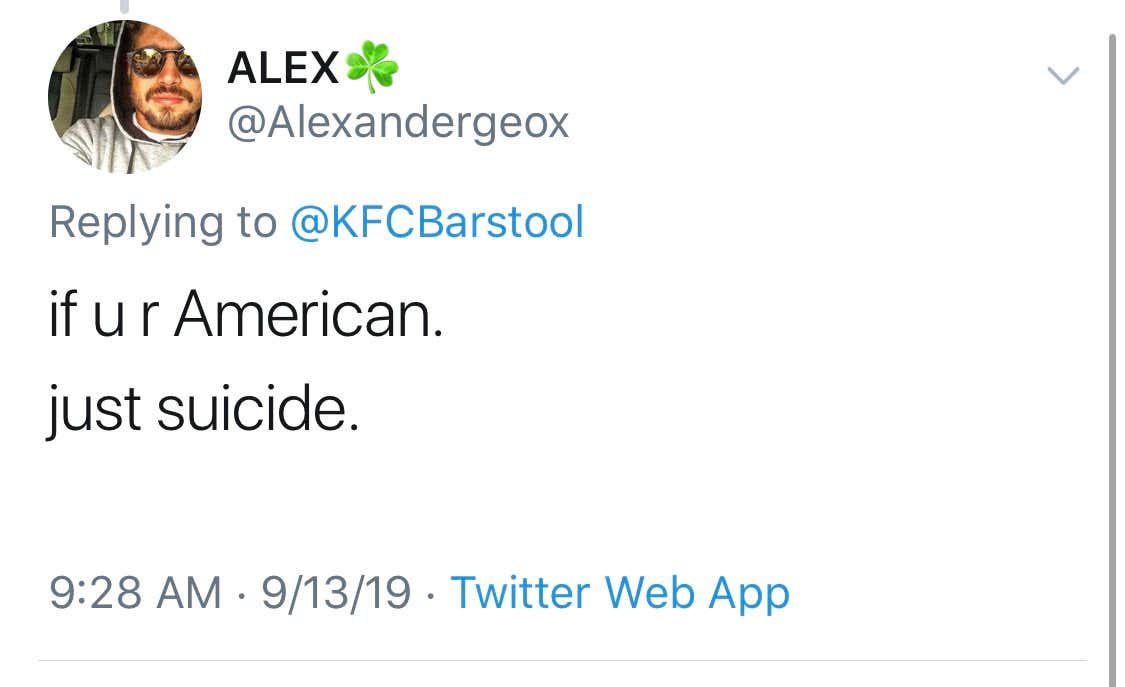 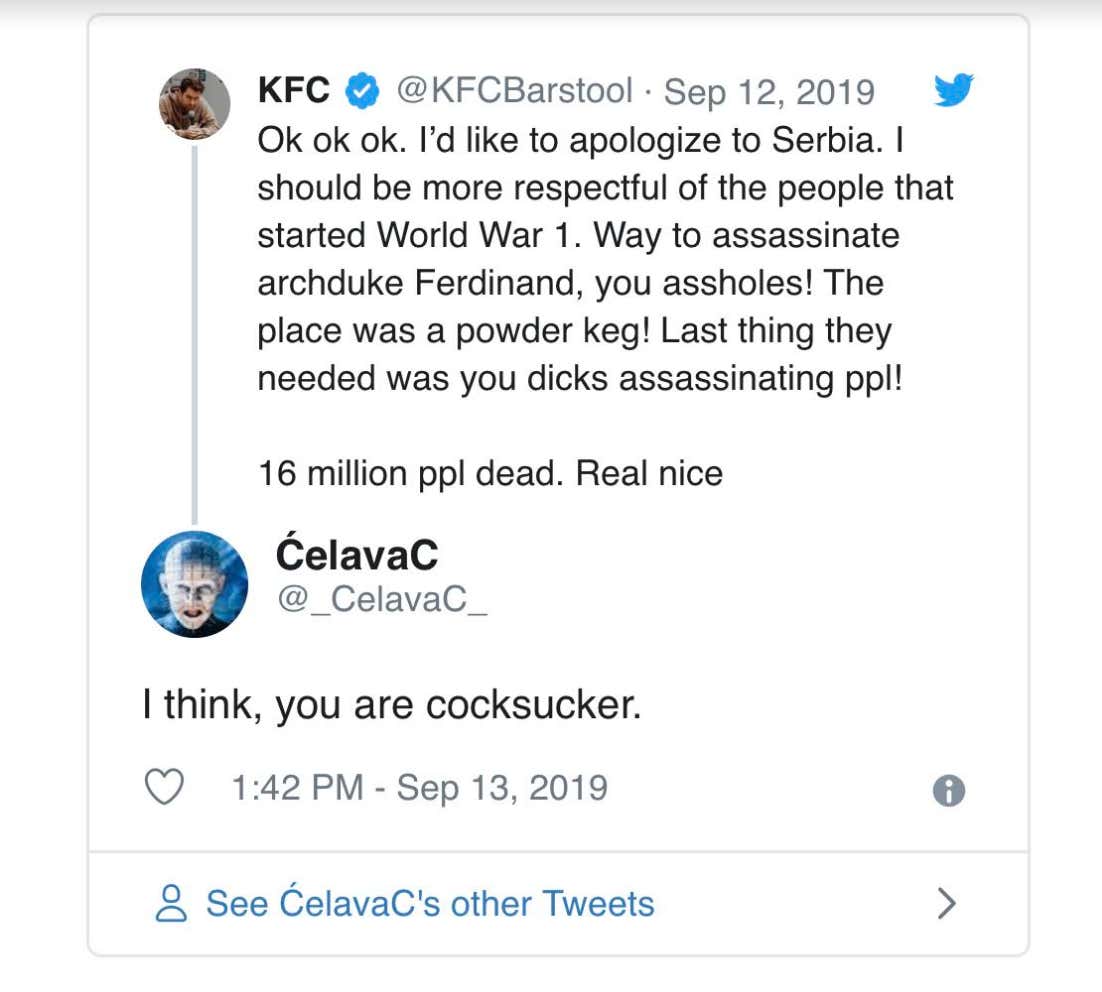 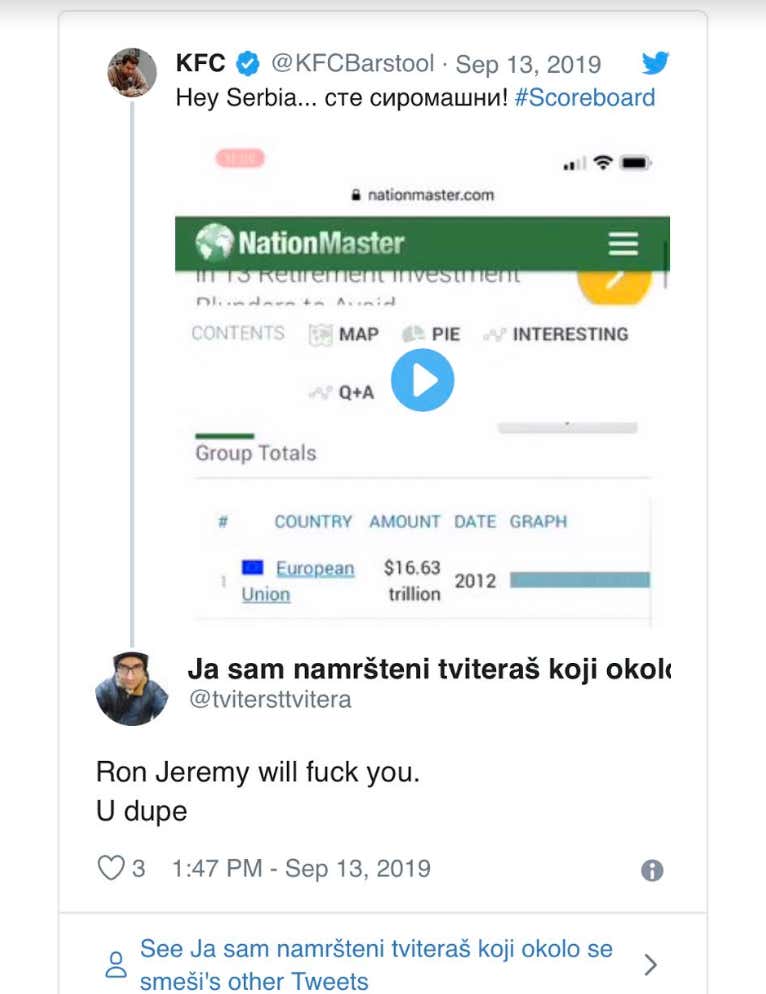 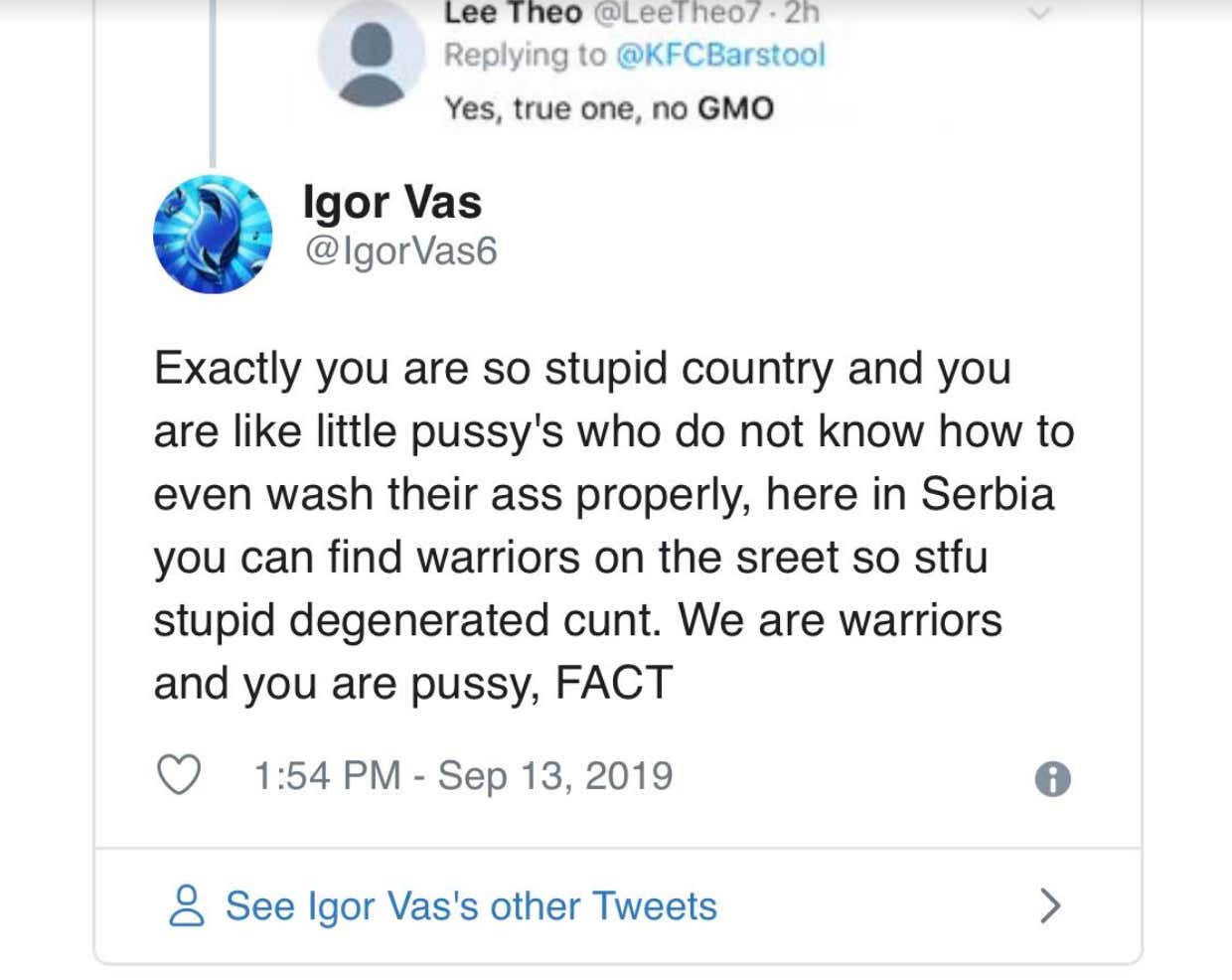 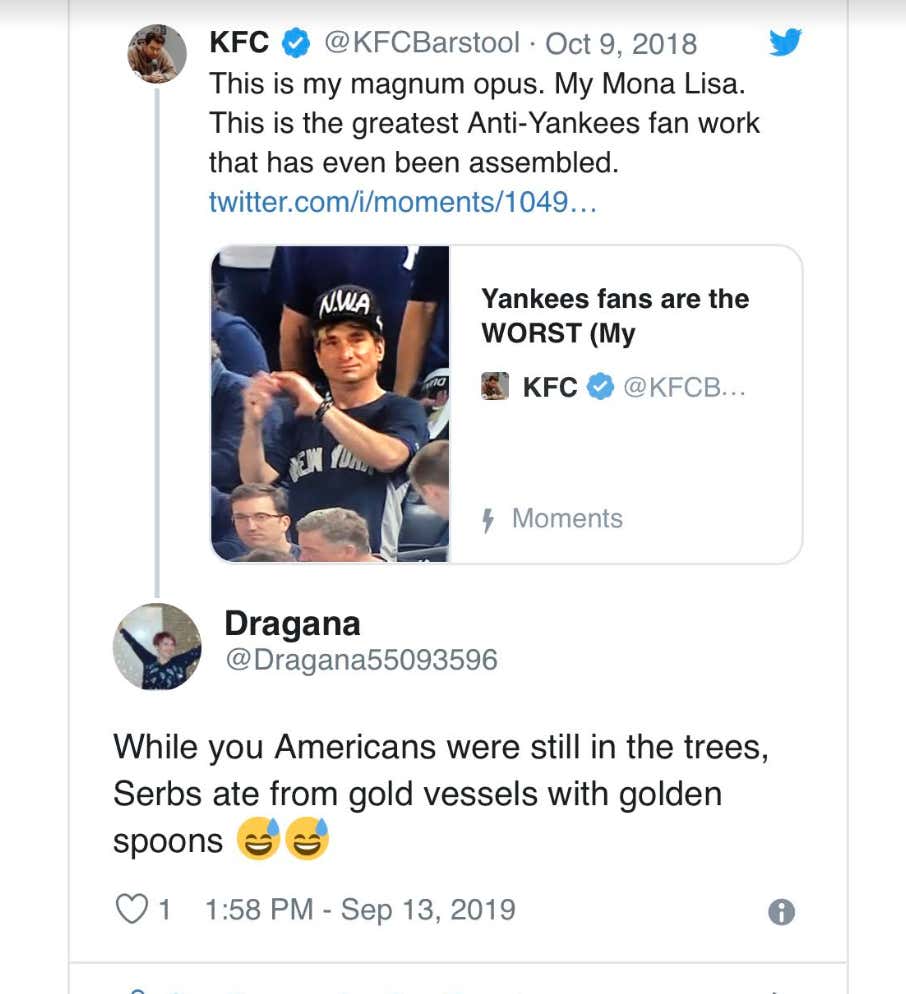 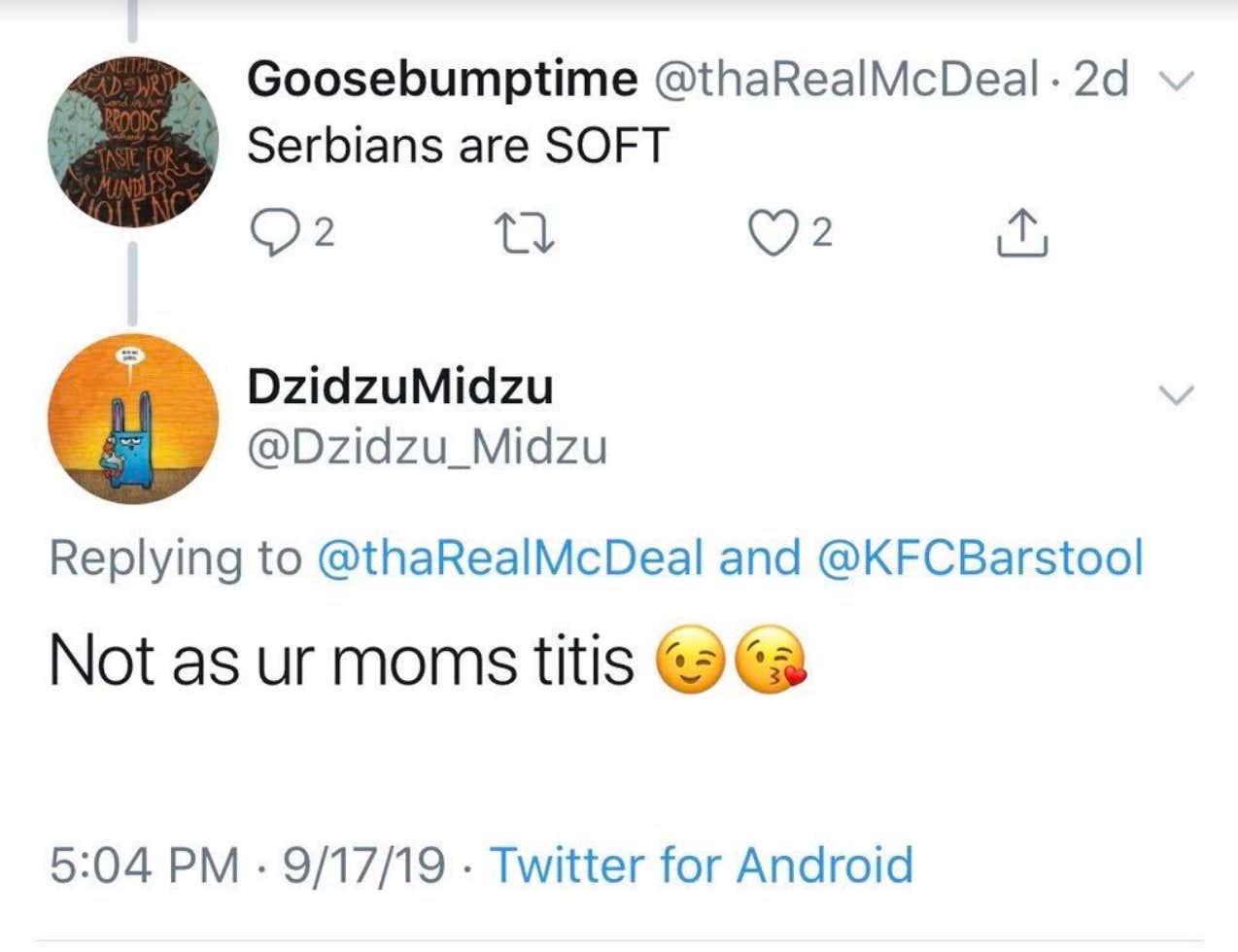 They even took this battle to a different front, attacking me on IG. A true veteran move. Everyone knows its impossible to fight a war on two fronts. How can one man fight an entire nation on Twitter AND instagram: 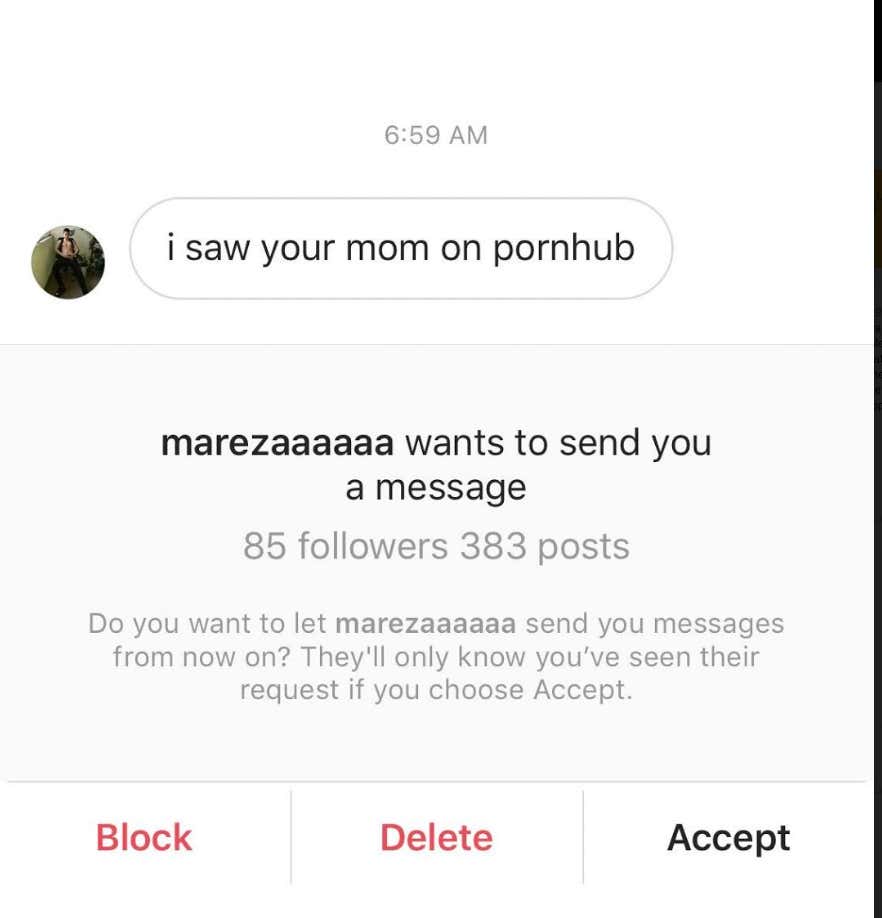 But here’s the thing. I can do this all day long. The Serbians are coming to twitter in droves to defend their nation. Like this chick who signed up for Twitter in 2012, never sent a single tweet, and resurfaced in 2019 to tell me she was gonna fuck me for the rest of my life: 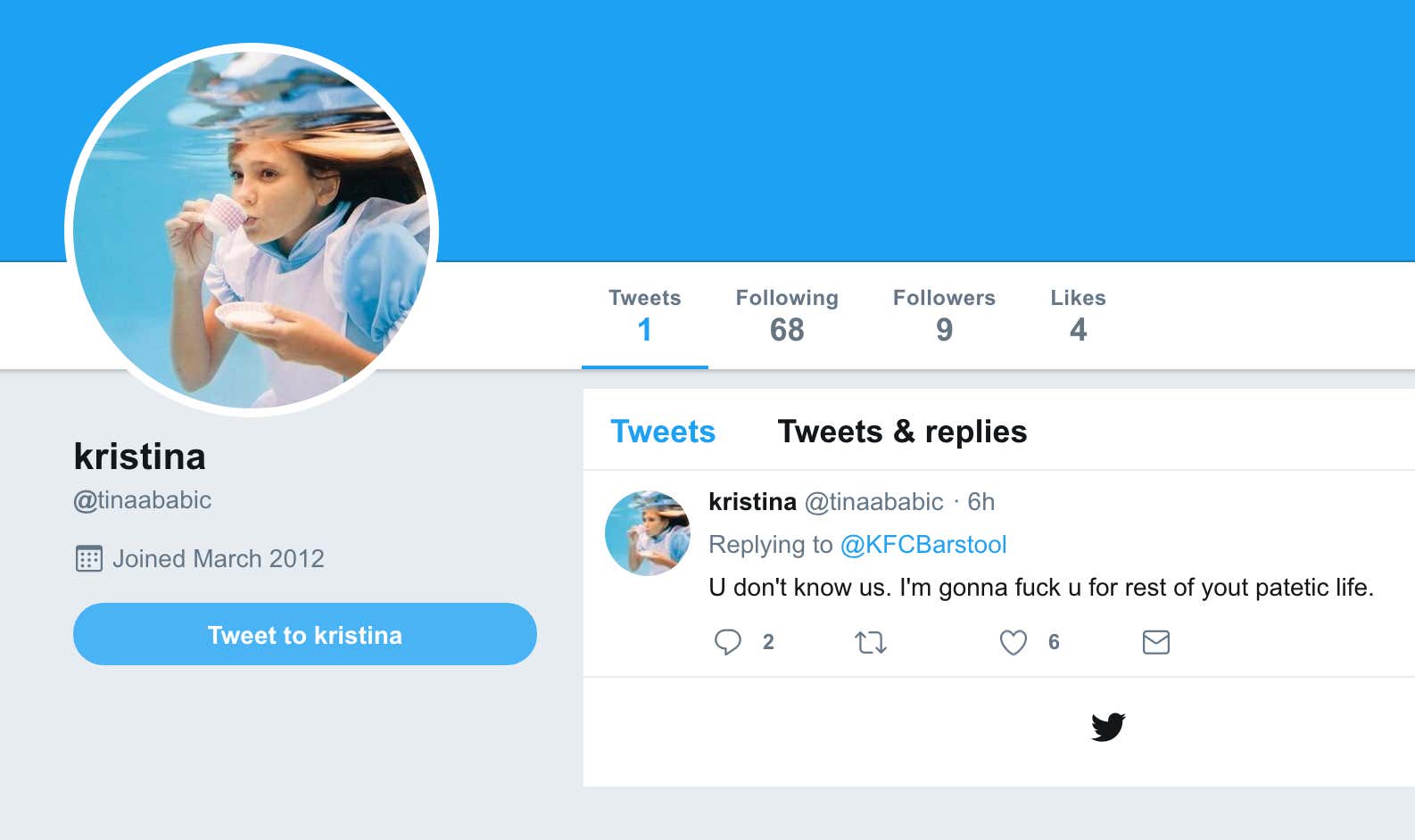 Dear Kristina – I once tried an agreement like this and it didnt work out so well. But thank you for the offer. I’m too busy living under my bridge on Twitter. This is what I DO, SERBIA. I will not relent. I will not stop. You merely adopted twitter beef; I was born in it, molded by it. 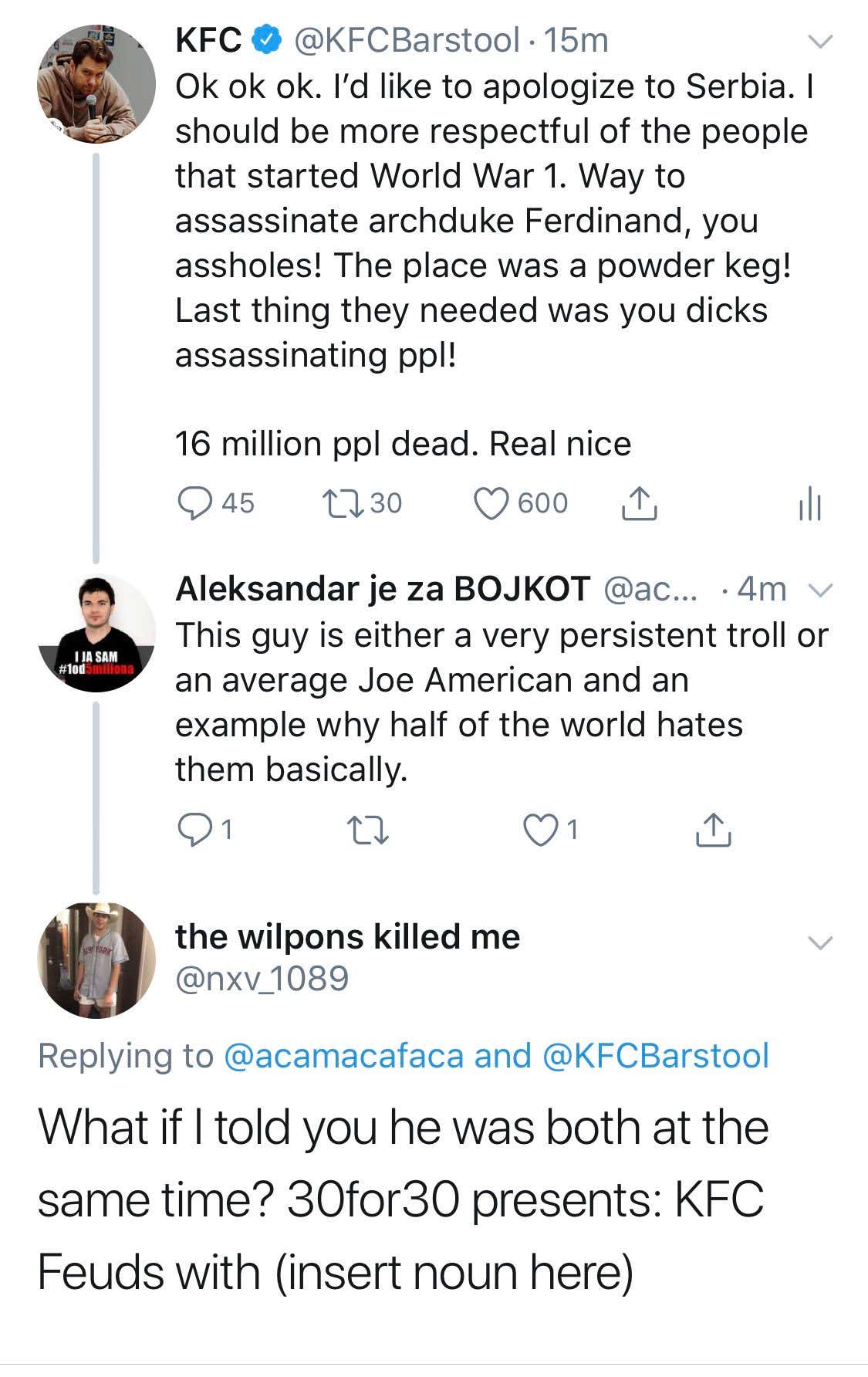 I’m sure they’ll be writing about the Great KFC War of 2019 in the Serbian textbooks one day, teaching the youth some warped version of the truth. But make no mistake, Serbia, the American youth knows the truth!

I’ll leave you all with this. It perfectly sums up the KFC vs Serbia feud. Because the two things I learned about Serbs are this:

1) They think they are way funnier than they really are 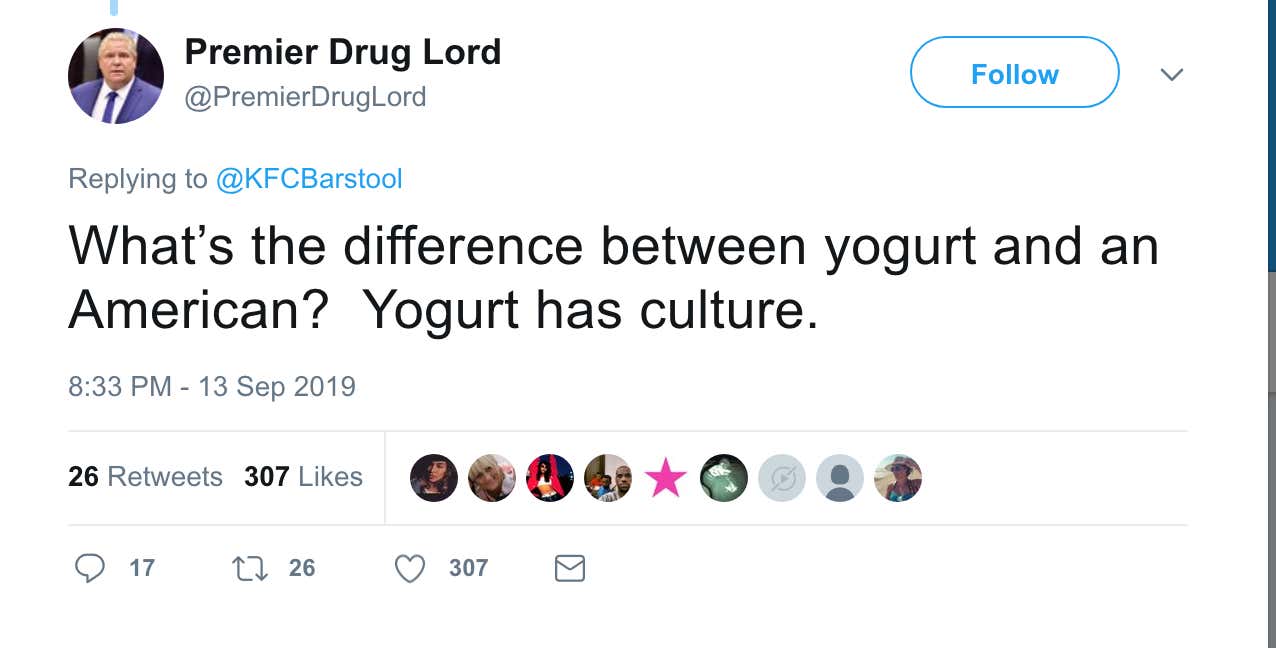 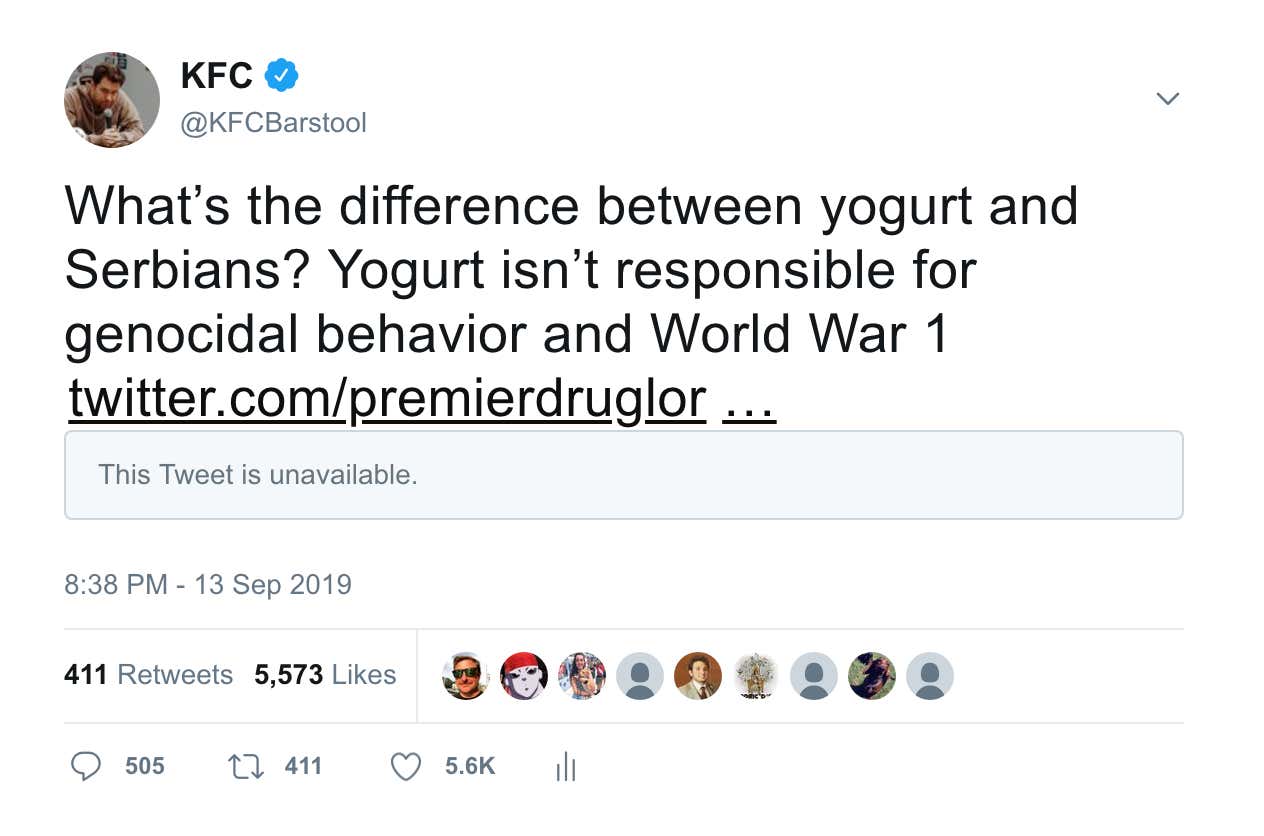 Fuck off, Serbia. Go join the Blindos and the Hondos in the graveyard. I’ll be back home in America. Land of the free. Home of the Brave. G-M-O! G-M-O! G-M-O!

PS – I officially believe this has to be considered my greatest feud. By far the most prolific. Largest scale. And a goddam member of the US Government actually got involved. Yes? No? Which feud do you think takes the crown?