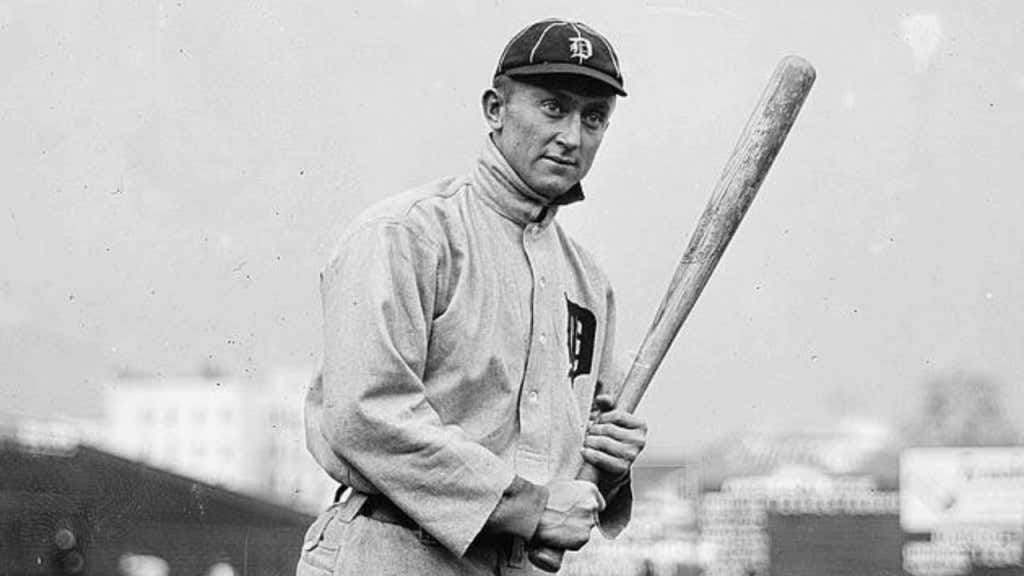 Ty Cobb of the Detroit Tigers hits his league-leading ninth home run of the season, leading his team to a 10-2 win over the St. Louis Browns at Bennett Park. None of the nine home runs that Cobb hit went over the fence, as they were all inside the park home runs. The Georgia Peach would go on to win the Triple Crown with a .377 average and 107 RBI.

Tyrus Raymond Cobb was born in Narrows, Georgia on December 18, 1886. Cobb became fascinated with baseball as a child; growing up in a family of means as his father was a member of the Georgia State Senate. After playing baseball in his hometown of Royston, against his father’s wishes, Ty Cobb signed his first professional contract with the August Tourists of the South Atlantic League. Before leaving, Cobb’s father demanded he not come home a failure.

In the minors, Cobb aggressively tried to catch the attention of major league scouts, sending postcards to teams and to writer Grantland Rice. The attention worked, as Ty Cobb was sold to the Detroit Tigers for $750. However, just before he made his debut with the Tigers, tragedy struck as his father was shot and killed by his mother. Mrs. Cobb thought her husband was a burglar and used the gun to shoot on an intruder. In truth, William Herschel Cobb snuck home in an attempt to catch his wife in the act of adultery.

After batting .240 in 41 games in 1905, Cobb raised his average to .315 in 106, before winning his first batting title with a .350 mark in 1907. He would lead the American League in hitting 12 times in 13 years. All this time he was playing a ferocious style that was symbolic of the “Dead Ball Era” as he would often take the extra base, sliding in feet first with sharpened spikes.

The 1909 season may have been the best of Ty Cobb’s career, as he led the Detroit Tigers to a third straight American League Pennant. Ty Cobb would win the Triple Crown with a .377 average, with nine home runs and 107 RBI. Besides the Triple Crown, Cobb led the league in runs (115), total bases (296) and stolen bases (76). No other player has ever led in all six categories, during the same season.

Ty Cobb was the greatest player of his generation and still ranks among the best players to ever play the game. When he retired, Cobb had a record 4,191 hits, posting the highest average in the history at .367. He also had 892 stolen bases which stood as the record until being topped by Lou Brock in 1978.