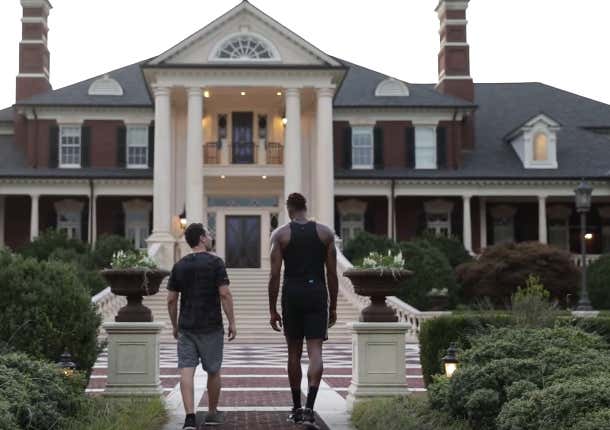 For a cool $8.8M you too could own this outrageous 35,000sq foot mansion down in Atlanta. We all make Dwight jokes on the internet nowadays, but you forget this man is a HOF player and someone who has made over $238M in his career. That’s good for the 10th highest career earnings in the history of the NBA. Not bad! My brain can’t even comprehend what it’s like to have a 35,000 sq ft house, for example recently I stayed in a 9,800 sq ft mansion in the Ozarks with like 25 foot ceilings and it was entirely too much house. The indoor basketball court was awesome, but that thing was exhausting going from floor to floor so I can’t even imagine what it’s like to navigate through this thing. No wonder Dwight has back problems, just walking around in his house is a goddamn workout. When I saw this video on my timeline I couldn’t click fast enough, partly because I LOVED MTV Cribs, Shaq’s episode is one of my all time favorites, so I was very curious how a similar type episode with Superman-Lite would shake out.

First off, thoughts and prayers for that one dude who is responsible for the upkeep of that entire house. If you’ve ever worked in landscaping before you know how much that shit sucks (shoutout Becker College). I mean 15 acres? Jesus Dwight get the man some help. Is there anything less surprising than Dwight Howard being a snake guy? Of course he is. I can see why though, he thinks people have a misunderstanding about them probably the same way he thinks people misunderstand him.

Where some people maybe use this as a nickname and even perhaps are inspired by what he went through in those movies, Dwight does all that as well as buying a purple’d out Rolls Royce because that seems like a solid way to drop hundreds of thousands of dollars.

Basically he explains that in order for Thanos to achieve his mission he had to get rid of his emotions. I guess that’s what he’s trying to do in LA? Maybe that’s why he didn’t take the bait when Shaq talked shit about him a few weeks ago.

I sort of do like the Thanos comparison though, because when you think about nit Dwight has pretty much destroyed every team he’s been on one way or another. Also, I’m pretty sure Shaq already took back the Superman nickname from Dwight so I’m not sure why he has so much Superman shit in his house. In fact, that name has been given to Giannis anyway.

If anything, all this video did was make me wish that MTV Cribs was back in our lives. That led me to a couple Google searches and would you believe me if I told you that MTV Cribs is actually making a comeback? Did people know this?

OK so it’s UK people but that’s just the tip of the iceberg in my opinion. Before we know it this will be back on US soil and we’ll be able to relive the glory days of our childhood. MTV is already bringing shit like The Jersey Shore and The Hills back, and now with MTV Cribs in the fold it’s only a matter of time before they revive one of their all time great shows in my opinion, Road Rules. You can’t tell me that wouldn’t be awesome.