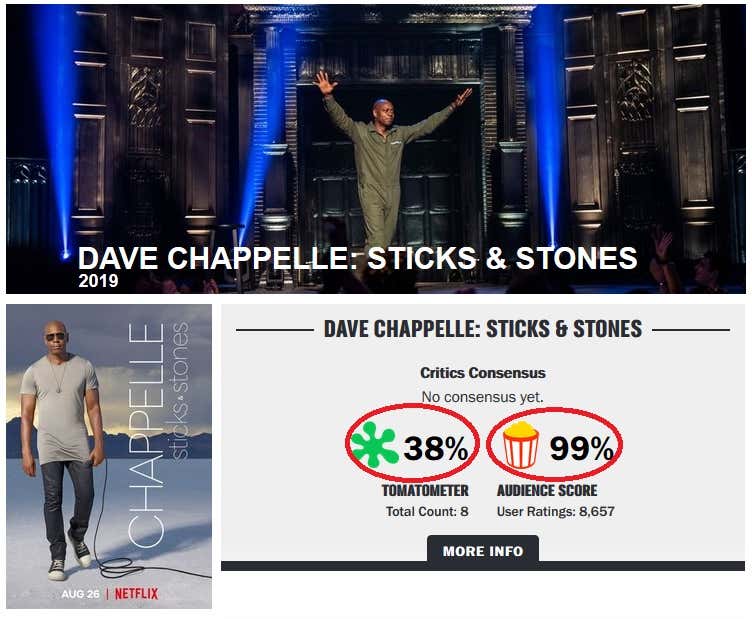 I think it’s been pretty obvious to anyone who’s been paying attention over the last 10 years or so, but culture war has been brewing in this country. As the risk of sounding overly ominous, when it comes to entertainment, we’ve been living in the equivalent of Europe in 1914. Lines have been drawn. Armies amassed. Treaties have been signed. Fortifications fortified. And we’re all just waiting for the match that’s going to light the fuse that will explode the powder keg we’re all sitting on.

There are lot of competing, rival factions here. But in broad strokes, it’s pretty much the professional scolds on one side of the cultural divide and the general public who are interested in harmless entertainment on the other. They wear different uniforms and go by many different names, but I think you know who our woke betters are when you hear them. Deadspin vs. Barstool. The people who comb through old Tweets looking to end careers. The ones who say “Lord of the Rings” is racist against Orcs.  Or who give Best Picture Oscars to “Fucking Nemo” while ignoring movies with broad appeal, but then get Kevin Hart fired from his hosting gig over 10-year-old jokes. Not to mention the people who demand you stop using the word “Guys” and use Jazz Hands because the sound of clapping is too triggering for them:

I could go on all day, but you get the point. It’s not politics. It’s about the culture. It’s about our betters telling us the things that make us happy are wrong, because they find them to be wrong. This thing has been coming to a head for a while now. And it’s quite possible that Dave Chappelle’s Netflix special “Stick and Stones” is the first shot fired. The assassination of Archduke Ferdinand that’s going to spark this thing.

Last week I wrote about how Chappelle’s stand up has inspired articles asking if comedy needs to to be funny anymore. It’s part of a larger debate about something called “post-comedy” in which every comic’s set should be a TED Talk that will enlighten the audience rather than, you know, actually make them laugh. Which I guess is so 1990s or something.

And that battle has spilled over into Rotten Tomatoes. Chappelle has gone out of his way to stand on the third rail of comedy, to push buttons and purposely offend people in order to make many, many more people laugh. And apparently it’s worked. He’s been an equal opportunity offender, giving the vapors to people as far left and far right: 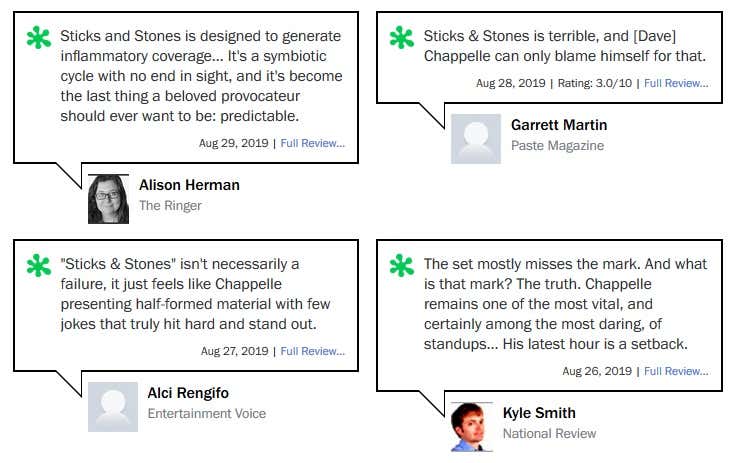 While achieving the virtually impossible feat of a 99% viewer rating.

What’s more telling to me though, is how few professional reviews have even been posted. “Sticks and Stones” is easily the most talked about stand up special Netflix has ever streamed. And the silence from the pros is pretty conspicuous. But the ones who have reviewed it don’t want to be caught dead laughing at bits about “the alphabet people,” or Michael Jackson or Louis CK’s serial jerking. Which I think was the exact point Chappelle was going for, while breaking the first rule of “post-comedy” by actually being fucking hilarious.

I guess it should be no surprise to any of us that the guy who created Tron Carter, Tyrone Biggums and Silky Johnson would be the one to pull the giant iron rod out of America’s ass. And the public is clearly grateful he did. We can all only hope that this is just the beginning. That we’ll finally all get over ourselves and lighten the hell up again. And that comics, websites, movies and TV can take back the territory that’s been lost.