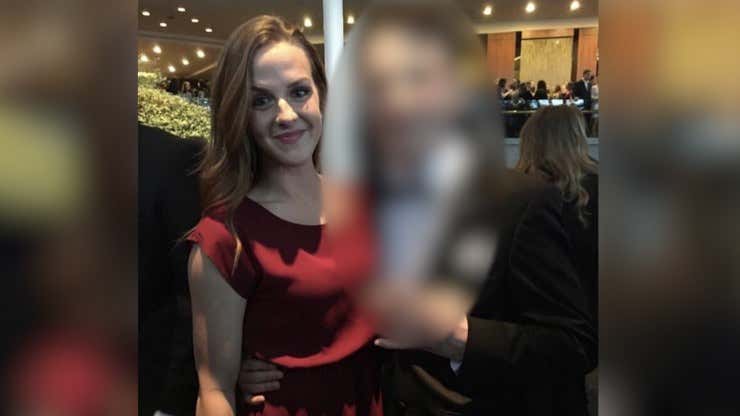 Newfoundland –  A substitute teacher under investigation since January is now charged with a sex crime against a youth.

According to court documents, Grimes was “in a position of trust or authority towards a young person,” when she “did for a sexual purpose touch directly or indirectly a part of her body with the body of [the alleged victim].”

The boy listed in court documents is a youth but CBC News has been unable to ascertain his age. It’s alleged the incident took place in Logy Bay-Middle Cove-Outer Cove between March 1, 2018, and June 30, 2018.

Last winter, the Newfoundland and Labrador English School District confirmed a teacher was being investigated after unspecified complaints.

According to news clippings and rosters listed online, Grimes had previously served as teacher representative for the Gonzaga High senior boys’ hockey team.

I’ll be the first to admit that, as Sex Scandal Teacher reports go, Krysta Grimes’ is not the most action-packed one we’ve ever read. Not by a long way. But I’m grading her anyway. And you know why? Because it’s Labor Day Weekend, that’s why. I’m grading her in honor of all the workers out there.

Organized labor is beset on all sides by powerful interests. By the government. By Big Business. By Dave Portnoy. It is under attack and it’s high time that groups like the Newfoundland and Labrador Teachers’ Association stands up and fights for the rights of their rank and file. To organize. To collectively bargain. To have good working conditions. Fair wages and benefits. And for the rights of substitute teachers who assist on hockey teams to, for a sexual purpose, touch directly or indirectly a part of her body with the body of one of the high school kids she teaches. Otherwise, what has the whole Labor Movement been about? Get on it, N&FTA.

The Grades:
Looks: She’s that woman who came really close to being very hot, but fell just short. Like she went to a modeling school and took acting classes by the furthest she made it was an improv troupe and as the spokesmodel in a local ad for a car dealership who really cares about their customers. But she’s still hoping for a break. Still, that’s good enough for a solid
Grade: B

Moral Compass/Bad Judgment: This business of “did for a sexual purpose touch directly or indirectly a part of her body with the body of [the alleged victim]” sounds so cold and clinical when they put it this way. But for now, we work with what we have. I’m sure more will come out because this is probably the biggest thing to hit Newfoundland and Labrador since the Vikings. It’s just not much. But I suppose their new to the SST game.
Grade: C-

Intangibles: Who would’ve guessed that a hot Canadian teacher would find being surrounded by hockey players so arousing?
Grade: A

Overall: C+. Until we hear more, that is. Happy Labor Day, everybody. Workers of the world, unite!