What the Twins are doing this year is pretty incredible, and how they did it is even more impressive.  I’ll get to the latter later in this blog, but first I wanna pay homage to the best offense in baseball a little bit.  And by “pay homage” I mean I’m going to do my best not to puke all over my keyboard because I loathe this organization just about as much as any team in baseball, but they really know how to form a team.

Let’s start with their offense

Look, I don’t care if they are taking steroids.  The more juice the better IMO.  I don’t think they are, not at all, but if they are then good for them.  It’s clear that they have an analytics staff that pays close attention on how to hit the ball out of the park though, so good on them.  Adapt or die.

But whatever it is they’re doing is going swimmingly, because they are going to SHATTER the team home run record set just last year by the Yankees at 267 home runs.  They are on pace to hit 318 dingers, 51 better than the previous high.  But it’s not like they have one prolific power hitter.  They home runs are spread out *somewhat* evenly through the entire lineup: 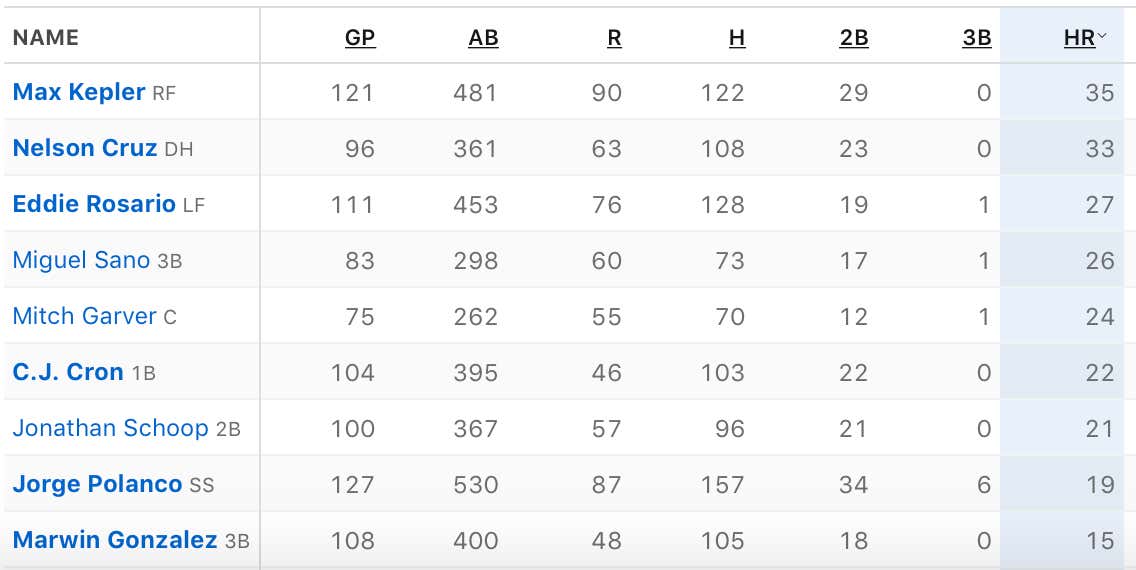 and with one more home run from Jorge Polanco they’ll be the first team ever with 8 players that have 20 or more.

It’s absurd how good they’ve been.  Sure their pitching isn’t too intimidating outside of Jose Berrios being able to shut down any lineup in baseball should he be on his A game, but though I hate the Twins I can’t do anything but respect them and how they’ve constructed the best lineup in baseball at the same time.

Last year they were 78-84.  Medicore as can be.  But they had a good core that consisted home grown talent in Jorge Polanco, Max Kepler, and Miguel Sano and have more on the way in Royce Lewis and Alex Kiriloff, both of whom are top 15-20 prospects that could see MLB at bats next year.  Their scouting is fantastic and it shows in their home grown stars.

But their front office, analytics and economics teams mastered the art of spending SMART money last winter. Novel concept.  They surrounded their current core of cheap, yet high end talent with quality MLB pieces last winter, all while letting their cheap, yet high end talent continue to develop or even take off like Max Kepler who will finish top 2-3 in HRs in the AL.  They are rebuilding but winning while doing so.  They didn’t ever really “tank” for an extended period.

Let’s take a look at their offseason:

Yonder Alonso, Jon Jay, Ivan Nova and James McCann are costing the Sox about $22.6MM.  They have combined for a 1.6 fWAR this season.  They’ve gotten $12.8MM of value out of those 4 players while spending about $22.6MM on them.

Now all of these calculations are far from a perfect science, but I wanted to attempt to quantify how good the Twins offseason was compared to how bad the White Sox offseason was.  It was always going to be a rebuilding year; add all of the players the Twins did and the Sox still aren’t winning more than 80-82 games or so at best probably.  But still, it doesn’t mean they didn’t lite a lot of money on fire.  It was…

BUT, if they did duplicate the Twins’ offseason, it would have been a much better year just from a visibility standpoint. You could have put Cruz at DH in place of players like Yonder Alonso and Ryan fucking Goins, Gonzalez in CF in place of Engel, Cordell and Tilson, and Schoop at 2B in place of Sanchez.  It’s not even like the Twins payroll is that high.  It’s 18th in baseball at ~$123MM.  But their offseason was fucking fantastic, maybe the best in baseball, and they’re cruising to a division title because of it.

Hind site is 20/20 for the White Sox, but this is the kind of offseason they need to have in 2019-20.  I’m not saying they HAVE to go out and sign Cole or Strasburg (should he opt out) to contend, and don’t necessarily think they should anyways.  But what they HAVE to do is go out and spend smart.  They did not do that last offseason.  They lit money on fire for the most part.  They need to take a piece out of the Twins playbook and target good, quality MLB players to surround a stud in Moncada and hopeful studs in Eloy and Robert with.  There’s a path to contention if they do so.  The Twins are proof of this.