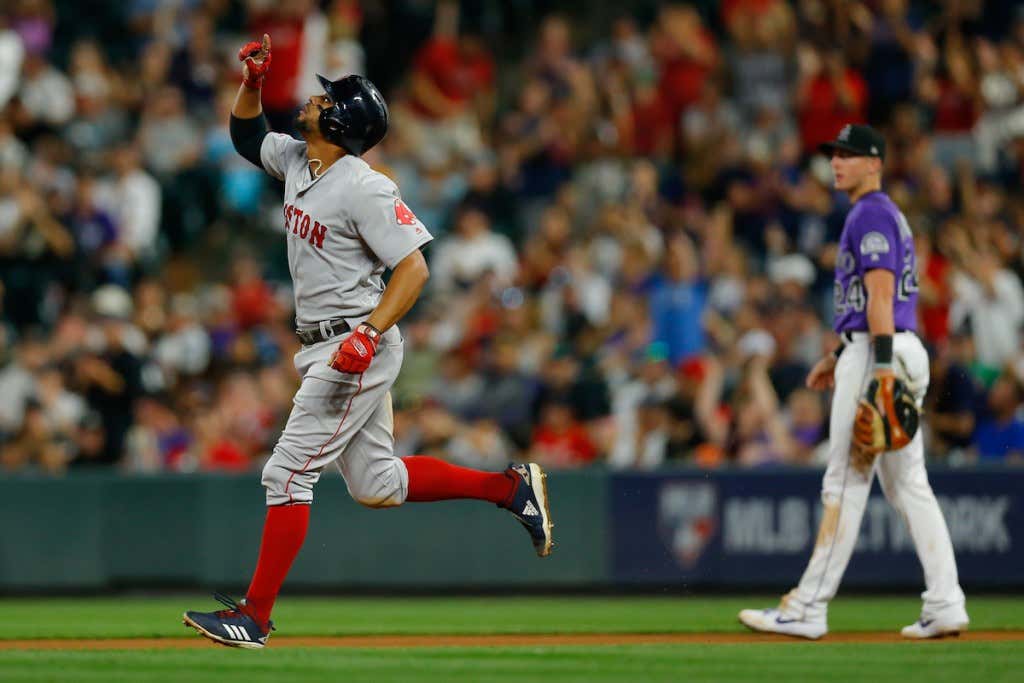 I know this is the written word, but just try to imagine that I’m saying this as quietly as I possibly can because I don’t want to draw any attention to it — the Red Sox are the hottest team in the American League right now.

I’ve been saying it all year. Don’t let the Red Sox get hot. And you know what? The fucking league listened. They’ve been a droning, mediocre team all year long. To the league’s credit, nobody really let them get hot. HOWEVER, over the last two and a half weeks, they’ve got the best record in the American League, winning nine of their last 12 games. For fans of teams like the Yankees, Dodgers, Astros, etc., feel free to laugh at that, as they’ve been on top of their respective game all year. That’s fine. Eyes on your own paper. The Red Sox aren’t dead yet in the Wild Card. As much as you’d like them to be, they’re just not.

Over Boston’s 9-3 stretch here, the Rays have gone 6-8 and the A’s have lost three out of their last five. Remember that board game Don’t Wake Daddy? Has a different tone now thanks to a certain podcast here at Barstool Sports, but I feel like we’re playing that game right now. I won’t name names, but I had a prominent player on a rival team flat out tell me the Red Sox are dead. We know that a lot of fans and most media have pronounced them dead weeks ago, but when Boston’s own competition starts thinking it? Well, that’s when the sneaky sucker punch comes.

Don’t underestimate the defending World Champs. They’ve got pride. They’re not playing out the string. They’ve got their eyes on October, which should’ve been the case all damn year, but alas. When some teams have shut it down because of where they were in the standings, the Red Sox instead chose to sack up and see if they could disrupt the playoff picture. Not because they want to play spoiler and ruin things for other playoff teams, but rather because they plan on punching a playoff ticket of their own. It. Could. Still. Happen.

The Red Sox came into Colorado with a hefty 13.5 over/under in the series opener, presumably Rick Porcello being the starter in that one playing a factor but he was not the reason why that game hit the over. Porcello was solid. Boston’s bats showed up in that one, and then they made sure to show up once again on Wednesday night when Xander Bogaerts went deep twice, Rafael Devers left the yard, as did JD Martinez once again.

Bogaerts became the third Red Sox shortstop in team history to reach 30 homers and 100 RBI with his second bomb of the night. Pretty good when you follow up your career year with a contract extension and another career year. That contract is already looking like a steal, and the scary part is that Bogaerts is still only 26 years old, folks. He could, in theory, continue to get better.

JD is continuing his reign of terror over the last month-plus. Since July 22, he’s leading the majors in just about everything — a .460 on-base percentage, .769 slugging percentage, 1.229 OPS, 100 total bases, and he’s just one percentage point behind Gio Urshela (.393) for the best batting average at .392. Dave Dombrowski was in Colorado, so he was watching every bit of Martinez tearing the cover off the ball. Get that extension done, sir.

Devers has just been a menace all season, so there’s no need to show what he’s been doing in trends. The 13-year-old leads all of baseball with 174 hits, 48 doubles (Bogaerts second with 46), 314 total bases, 80 extra-base hits (Bogaerts second with 76), and he leads the American League with 104 RBI. If it weren’t for Mike Trout, we’d be having serious discussions about where Devers fits in for the American League MVP race.

Now the Red Sox head to Anaheim to take on the Angels, who they haven’t exactly dominated, but they should. The A’s have three with the Yankees, and the Rays have a weekend series with the Indians. If things go according to plan, we could have a VERY interesting American League Wild Card picture come Monday morning. Buckle up. I don’t just want a shit show of a September. I need it.

Programming notice for Starting 9 listeners — I got interviews with Kirby Yates in San Diego, and then we got Nolan Arenado, Trevor Story and Charlie Blackmon in Colorado. Lots of great content coming your way, so be sure to subscribe on iTunes to hear all of those interviews!