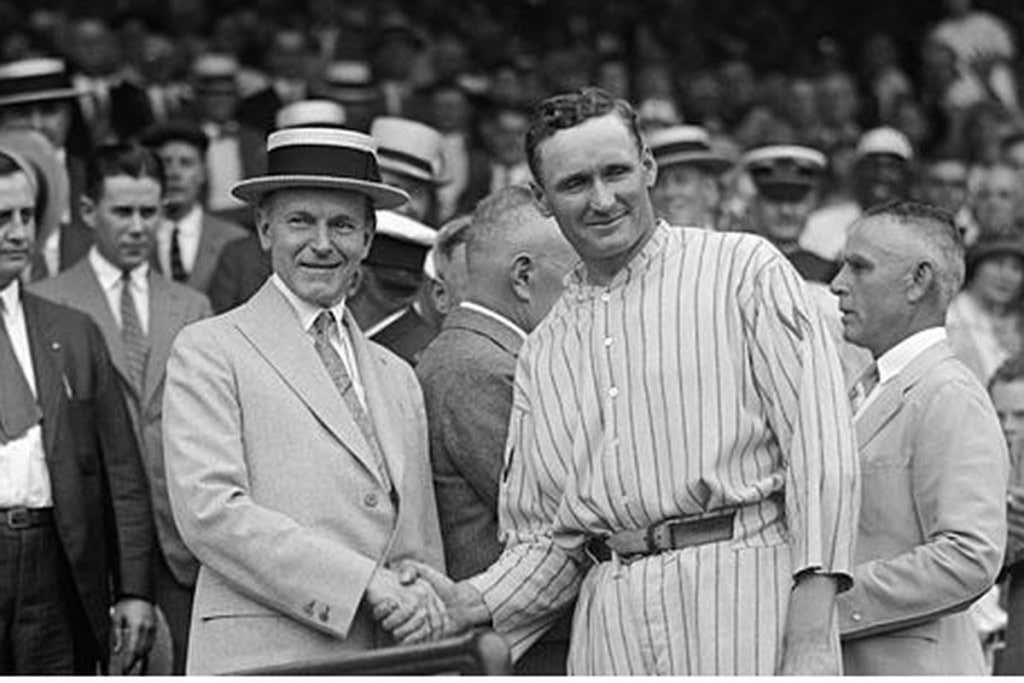 Walter Johnson of the Washington Senators throws a seven-inning rain-shortened No-Hitter leading his team to a 2-0 win over the St. Louis Browns at Griffith Stadium. The game would count officially as a No-Hitter until 1991 when a rain-shortened No-Hitters were stricken from the record as all No-Hitters were required to be nine innings. Johnson would lead the Senators to their only World Championship that season.

Walter Johnson, the Big Train as he was called was born in Humbolt, Kansas on November 6, 1887. As a youth, Johnson spent his spare time working in the oil fields and playing baseball. When he was 14, his family moved to Fullerton, California, where he began to show his greatness as he struck out 27 batters in a 15-inning game against Santa Ana High School. After High School, he worked for a telephone company in Weiser, Idaho, while pitching in a small league in Western Idaho. It was there he was spotted by scouts was signed to play with the Washington Senators.

On August 2, 1907, Walter Johnson made his debut with the Senators at the age of 19, and immediately impressed Ty Cobb who called the rookie “the most powerful arm ever turned loose in a ballpark”, as he and his Detroit Tigers mocked him before the game, calling him a hayseed. Cobb’s praise would be proven right as the tall pitcher, became the most dominant arm in the game in quick order. Playing most of his career on a second-division Senators team, Walter Johnson was the top pitcher in the game, as he led the American League in strikeouts 12 times, wins six times, and ERA five times. In 11 of this first 13 seasons, Johnson’s ERA was under two, including the 1913 season when he posted an ERA of 1.14 while winning 36 games and throwing 11 shutouts.

With the Big Train on the mound, the Senators had a record of 69-52 as they hosted the St. Louis Browns on Monday. The Brown entered the game in the middle of the pack at 61-58 as George Sisler’s squad had Dixie Davis on the mound. The Senators put up nine hits against Davis, scoring runs in the third and seventh, while Walter Johnson did not allow a hit, as just two Browns reached base with walks. After the second run scored, the rains came, a later afternoon thunderstorm ending the game after seven innings. Walter Johnson who tossed a No-Hitter in 1920, was credited with a seven-inning No-Hitter, striking out two.

Walter Johnson won the pitcher’s Triple Crown in 1924, as well as the League Award a precursor of the MVP with a record of 23-7 and an ERA of 2.72 and 158 strikeouts. As the Senators won the Pennant with a record of 92-62 led by 27-year-old Buck Harris a player-manager who would be the younger to win the World Series. It would be the only World Series won by Johnson, who retired in 1927 with 417 wins, second to only Cy Young. He would also hold the career strikeouts record of 3,508 until Nolan Ryan broke it in 1983. Johnson’s 110 shutouts remain the standard, as a result, was among the first players in the Baseball Hall of Famer.