I don’t even know how to begin writing this blog. This is insane. Mike Posner was walking across America, doing pop up shows and releasing new music along the way, and then at mile 1632 he was bit by a fucking rattlesnake and almost freakin’ died! 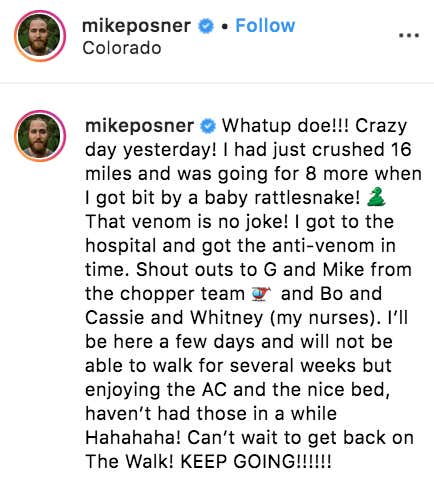 And your boy YP is just out there letting snakes bite him all willy nilly? Fuckkkkkk that.

One second he’s out there looking like Forrest Gump

And then the next second he can barely walk. Absolute madness.

And yes, I’m a big conspiracy theory guy and I 100% want to be woke on this and say that it’s all part of promotion for a new album/tour, but I’m not gonna say it because I’m not *that* woke. But I’m definitely thinking it.