Holy fuck that was incredible. Forget about being the greatest Daniel Jones hype video, which is almost an oxymoron since real swag is no swag. That may be the greatest hype video I have ever seen. Sure you could put together a montage of the most embarrassing moments of my life set to the Austin 3:16 speech along with some well-timed classic memes and I would probably still love it. But that is neither here nor there. It is the morning of the first Giants preseason game and I could not be more excited to see our first round QB in action tonight. Again, a lot of that is due to hoping the haters are wrong and the Madden ratings guy gets Old Takes Exposed to hell. But if you can’t get excited about the Daniel Jones experiment tonight after watching that video, you either don’t have a pulse or refuse to believe he is going to be anything but a bust.

Am I a little concerned the Jones may start tonight and have a six figure bounty placed on his head by Gregg Williams because putting the head of Big Blue’s QB of the future on a spike would cause every Jets fan to go all in on his new defense? Of course. But the one thing about Mothafucka Jones is he doesn’t scare. It doesn’t matter if he is taking a severely undermanned Duke team into Death Valley (Clemson version) or has a bunch of the freakiest athletes on the planet going for his head in the Snoop Bowl (RIP In Peace). Tonight is the night Giants football returns and Daniel Jones actually gets to let his play do the talking instead of his blabbermouth GM or weirdos that do mock drafts 365 days a year. So hats off to Ryan Gouse for not only making this video but also including the perfect creed for Daniel Jones believers:

The DanWagon is an exclusive luxury mode of transportation not suitable for the Sheep who follow the likes of ESPN First Take and whatever your alcoholic of an Uncle Ron shares on his Facebook. Dedicated to the Haters of which there are many. If you arent on the wagon as of 8/8/19 youre excluded from all future DanWagon meetups and bake sales. Also his multiple future Super Bowl and Pro Bowl appearances.

And in case all that wasn’t enough to make you fall in love with Daniel Jones, I went to his Twitter to gain some more inspiration and it’s fair to say I found it. 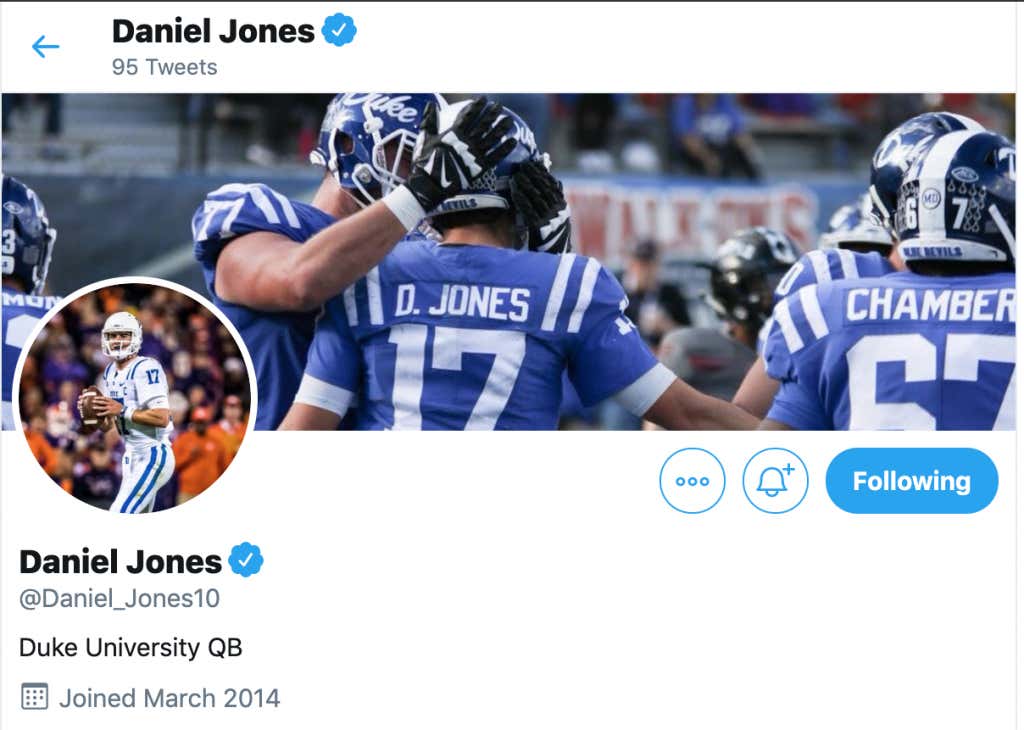 DJ still has tweeted 95 times in 5+ years on Twitter, still has his old number in his handle, and hasn’t updated his bio to being a fucking NFL player, which is something I would do even before I awkwardly dapped up Roger Goodell on stage. If that isn’t humble, I don’t know what is (Or Jones doesn’t have a crippling addiction to social media, which is impressive as well). So get on the train now because it leaves the station tonight and will not accept any new passengers for the rest of his career.