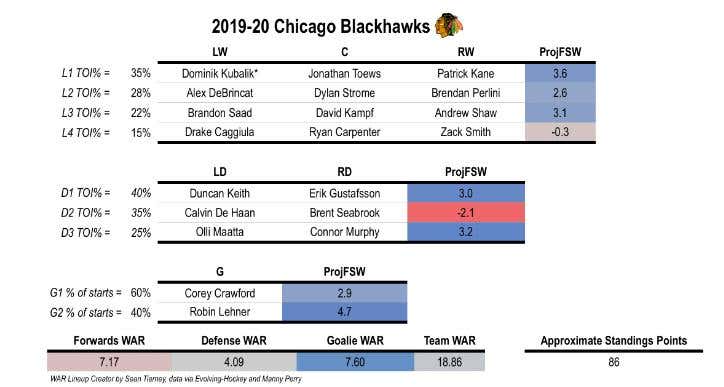 So this chart came from Sean Tierney of The Athletic. If you like data points, analytics, etc then I highly suggest clicking on the hyperlink or the Hawks data image and reading the entire article.

Having said all of that…these numbers STINK. I refuse to believe that a full year under a Colliton’s system, the improved goaltending with a full season of Crawford and Lehner, De Haan added to the mix on defense, a deeper forward group including Andrew Shaw, and a full year from guys like Strome, Sikura, Perlini, and Caggiula, that all of that together is an 86 point team. That ALL of that is only worth a two point improvement in the standings. No, no, no. The goaltending and a penalty kill that isn’t historically bad should be worth that alone. Even if you assume that Toews, Kane, and Debrincat don’t quite repeat the career years they had offensively last year, you’d also expect an uptick from Strome, and the bottom 6 which looks much deeper on paper. You’d also assume that they’d be keeping more pucks out of their net. You’d pray that to be the case.

I’ve said time and time again this summer that I am not necessarily convinced that this Blackhawks group is a lock to be a playoff team. I think they’ll be on the bubble. HOWEVER…that was under the assumption that the 8 seed point total in the West would normalize a little over what happened last year and you’d need roughly 95 points to get in. Not the 89 that Tierney projects. If 89 points is enough for a playoff birth then the Blackhawks will be there, and that is a Barstool Chief guarantee

Everyone knows how I feel about Stan and John at this point, but I am getting awfully tired of people hating on this team. TWO fucking points in the standings when you surround Toews and Kane with competent goaltending, an improved defense, and a full year under the new regime…if that is what your formula sends back about this team then your formula is fucked. It does line up with the general attitude towards them. People talk about Keith like he’s completely washed. Toews wasn’t among the top 20 centers in the NHL after he had a career year offensively. It’s disgusting and disrespectful and I won’t stand for it. It is time to start believing in this leadership. The top end guys. I am ready to go. I am ready to campaign. I ready for October. LET’S GO, FUCK MATH