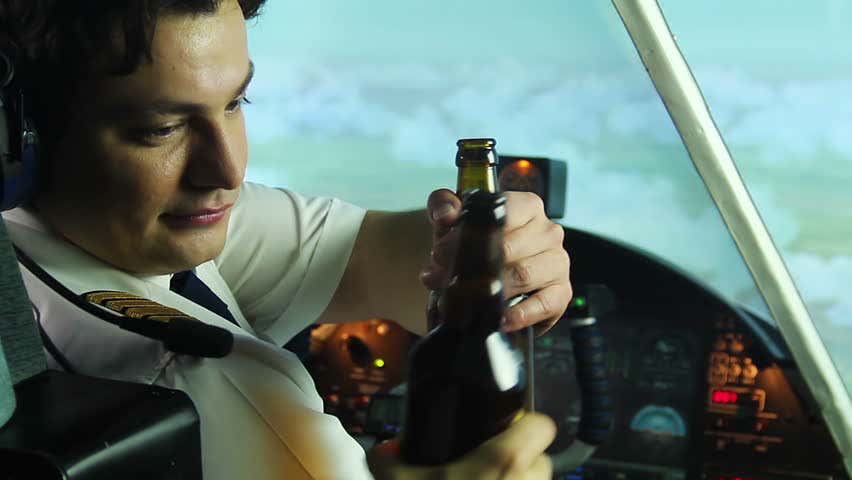 Business Insider – United Airlines canceled a flight from Scotland to New York on Saturday after two pilots were arrested on suspicion of being drunk.

The police in Scotland were called to Glasgow Airport at 7:35 a.m. local time and took a 45-year-old man and a 61-year-old man into custody, the BBC reported.

They had failed a breathalyzer test, the BBC and Scotland’s Herald newspaper reported…Officers have since charged the pair under the UK’s Railways and Transport Safety Act 2003, The Herald reported. The pilots face up to two years in prison. They are scheduled to appear in court on Tuesday.

I feel like we hear stories of pilots getting shit faced kind of frequently. It’s not like a daily occurrence but considering their job is to, ya know, transport a bunch of people through the goddamn air…a few times over the course of a few years seems to be a little more frequently than it should. And it’s not like I’m someone who doesn’t understand and appreciate the little rush you get whilst drinking on the job. Everybody hates working. If they didn’t, then they wouldn’t call it “work”. So if you can knock back a couple of beers to make your work day a little more enjoyable, then go for it. I wouldn’t suggest slugging down a bottle of Jack and being completely incapable of doing your job. But if you have a job that you can enjoy a casual beer near the end of the day to make sure you don’t completely lose your mind and go on a rage-fueled rampage after a few more months of being stuck there? Have yourself a day.

It’s just that maybe being a commercial airline pilot isn’t necessarily one of those jobs. It’s a little different between some dude who is sitting at a desk doing insurance claims cracking open a beer at 4pm as opposed to somebody who is flying a couple hundred people from Scotland to New York. I’m not sure if you’ve ever seen a map before but there’s a giant fucking ocean separating those two places, which doesn’t exactly seem like an ideal place to land in case you need to pull over to puke & rally. I’d have to imagine that people would be pretty concerned if they had an Uber driver pick them up and gassing a beer right before they took off. And those dudes are just driving you like 10 minutes away because you’re too lazy to walk.

Moral of the story here is that drinking on a plane is great. Unless you’re the person who is in charge of flying the plane. Maybe then you should just wait to crush a few in the terminal once you landd.