At the old office I didn’t have a desk & would often scuttle from spot to spot throughout the day, getting the boot as people came & went. On top of that, there were only a couple windows facing a dark canyon of buildings and a lot of times you’d go a whole day not knowing what the weather was outside.

Now, not only do I have a desk, it’s right next to an enormous window and my $2 cactus is thriving. (Sorry to brag & I wish your pathetic office plants the best.) 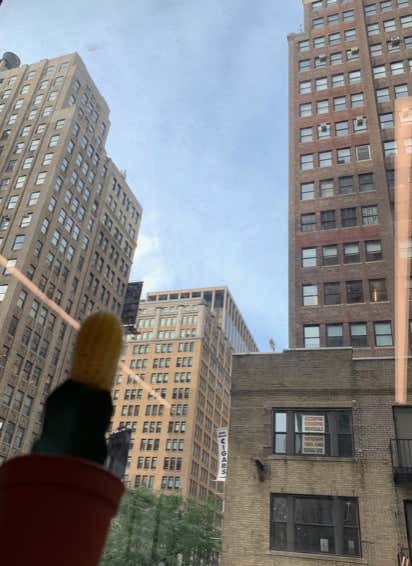 The novelty of a window hasn’t worn off yet & all day long I find myself getting distracted by sounds & movements outside. Marty Mush & the other degenerates like to gamble about how many taxis will go down the block during the span of a green traffic light, we’ve witnessed some police & FDNY action, and I’ve seen this flute man in person no less than 5 times now as he walks down our street playing his flute in a speedo, rope tied around his waist dragging a box of items about 10 feet behind him down the bike lane:

What a thrill. And then today I heard a drum in the distance, looked out & had to double take. Lo & behold, it was a full band playing on top of a bus. Doing a little Big J Journalism, I noted the name on the side (Abracadabra) and looked it up. Turns out, this is a pretty normal day for them…

According to The Villager:

Owned and operated by Tycho a.k.a. “The Bus Daddy,” the converted school bus has been to Burning Man 10 times and has an intriguing history.

“I bought it in 2008 on eBay,” he said. “It was a traveling reptile museum, with the largest king cobra in the U.S. It was well taken care of — nobody wants to break down with a bus full of cobras.”

With the stench of snake feces long gone, the bus is now full of friends, family, performers and the lucky paying customers who bought space on the bus through Airbnb Experiences. Nine year-old Annie got her money’s worth, sitting for glitter makeup (as did her dad) and putting on a costume while the bus was en route to a performance. Gail, from the U.K., thought the whole thing was “fabulous.”

Basically, for a fee, they’ll dress you up like a hippie/rockstar & let you cruise around on the bus for 3 hours while they perform a concert on top of it. Honestly, probably more interesting than the usual double decker tours I see going around jammed in traffic.

Apparently they played up at Central Park this afternoon & were making their way to a new spot when they rolled by HQ. Makes me think… I’m sure that old Barstool bus is sitting around in a lot somewhere. New gig for Pup Punk?? I can see Frankie in the window already thinking about it. 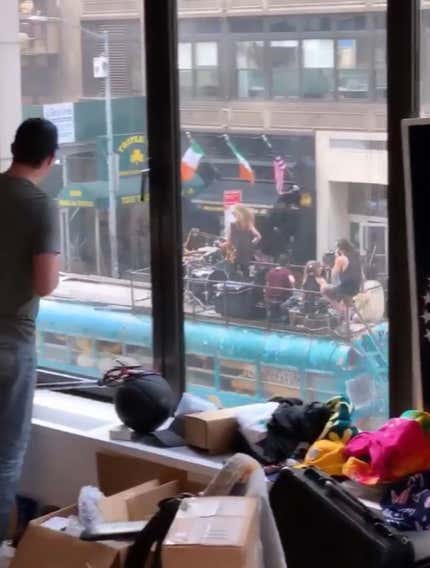