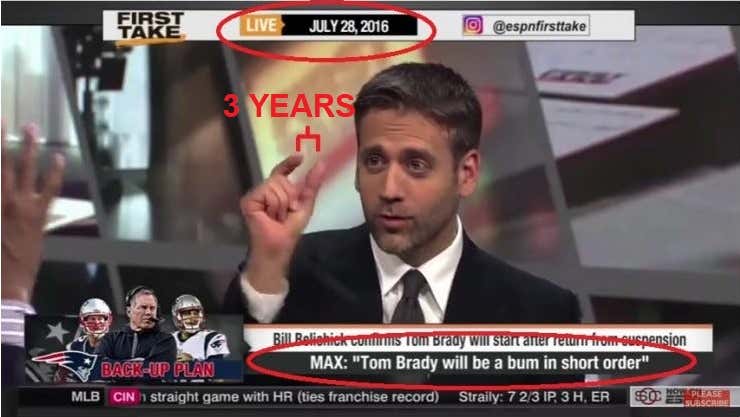 “No one will remember I said this now. And my prophecy will get no recognition.”
– Max Kellerman, July 28, 2016

Three years. It’s been three years since Max Kellerman detonated across our screens with this Hot Take the temperature and explosive power of the Big Bang itself. And Stephen A. Smith spoke for all of us with his reaction. A reaction that should be on the banner outside a museum exhibit on Incredulity: 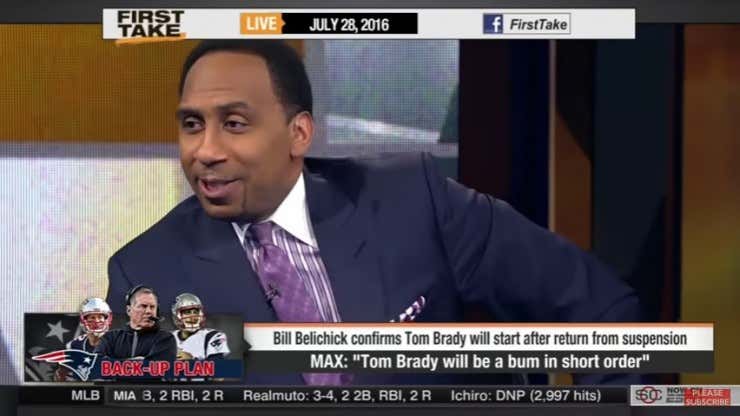 So let’s take a look at how Tom Brady’s three years as “a bum” have looked since Cliff Kellerman’s bold prophecy. From the beginning of the 2016 season to the present, Brady:

— Has led his team to all three Super Bowls, winning two.

— Has 106 Touchdowns to 27 Interceptions

— In the postseason, has thrown for 17 touchdowns to 6 INTs.

— Has five games with a Passer Rating of over 100 in his nine postseason games, including all three in 2017

In addition, here’s what the analytics people say:

In graphic form, here’s what Brady did when he met Kellerman’s “cliff”: 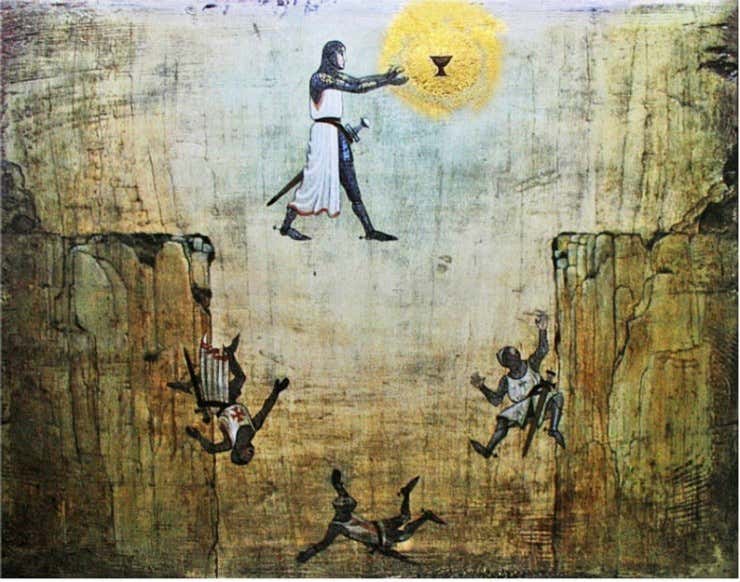 There are different ways to react when faced with sustained excellence over a remarkably long period of time. One is to dismiss it. To attribute it to luck or unfairness or rules breaking of some sort. Another is to sit there and wait for it to run its course while predicting it will end. And inevitably, if you wait long enough, eventually you will be vindicated, because nothing in human endeavor is permanent and all things must pass.

The third way, the one I choose, is to embrace it. To enjoy greatness when it’s presented to you to the fullest extent you can. As Voltaire said, “Appreciation is a wonderful thing; it makes what is excellent in others belong to us as well.”

I celebrate Tom Brady’s sustained, incomprehensible run of greatness. Because it is rare and precious. In the way I can appreciate the Rolling Stones selling out stadia 55 years after “It’s All Over Now” went to No. 1 in the UK. In the way I can appreciate that a quarter of a century after taking America by storm as Rachel Green, Jennifer Aniston can still pull this off:

I can appreciate Brady for being the Tom Hanks of football, pulling himself up from the “Bosom Buddies” days to winning Oscars for “Philadelphia” and “Forrest Gump,” and now in that phase of his career where he’s still doing great work playing Captain Phillips, Sully and Mr. Rogers. Even if I hated the Patriots, I would no sooner count down the days to Tom Brady’s demise than I would root for Keith Richards to OD or Jennifer Aniston to get botched Botox surgery or Tom Hanks to start starring in direct-to-streaming “Turner and Hooch” sequels. Fortunately, none of those things are happening any time soon.

So happy anniversary to Cliff Kellerman. On this day, I’m asking all Patriots fans to be kind to him. He has made it abundantly clear he can’t stand hearing from you. So do NOT Tweet to him @maxkellerman and remind him what today is and how you HAVEN’T forgotten. That would be wrong.