News surfaced yesterday that ADAP is dead broke. Despite making around $100 million in his career, he has negative money to his name. It’s tough. And now, people are remembering the details from 4 years ago, when Peterson threw himself a lavish birthday party. And boy, the details from BSO are something else:

Peterson made a list of about 320 friends and family members. He sent out invitations with an embossed signature logo. He bought his guests first-class plane tickets to Houston and booked them first-class hotel rooms.

Kinda crazy to fly in 320 people and give them all first class tickets and hotel. Kinda crazy, but ok, we can deal with it.

They found a lemur available for rent and a python that would drape like a scarf over Peterson’s shoulders. They imported a troupe of snake charmers out of Dallas and world-renowned belly dancers from New York. There was an elaborate tent city in Peterson’s backyard: Moroccan couches, velvet drapes, ice sculptures bearing Peterson’s initials, imported trees and a throne on which Peterson alone would be allowed to sit. The cake designer baked a royal palace flanked by a fondant camel and elephant. Wale agreed to perform. Jamie Foxx offered his services as a DJ. In the final hours before the party, more than 100 workers rushed to set up stripper poles, a hookah bar and a cigar humidor in a tent called the Man Cave.

Yep, he went all out. He flew in belly dancers from New York. They rented lemurs and pythons. Wale performed. Jamie Foxx DJ’d. They had a tent with strippers called the “Man Cave”. And it gets better!

“Even the port-a-potties were over the top, with silver sinks and shiny floors,” says Bobby Maze, one of Peterson’s closest friends. “You would have thought you were going to the bathroom at Ruth’s Chris.”

Who even knew they made state of the art port-a-potties?

Peterson entered by a path from the front door of his house toward the main tent. Another parade formed in front of him to lead the way: first the fire-breathers, then the sword swallowers, then the snake charmers and the belly dancers and then finally a camel, rented for the night from an Austin zoo. By the camel’s side were three men dressed as humble peasants, their eyes glued to the floor, and atop the camel was one man, Peterson, wearing a bejeweled Arabian headdress and a gold sequined jacket.

THEY RENTED A CAMEL FROM THE ZOO.

The children stayed inside his mansion under the care of a nanny as the party continued to build momentum past 10 p.m., then midnight, then 1 a.m. The Man Cave finally opened at a little past 2:30 a.m., and men played video games on a PS4 while a group of women who referred to themselves as “pole magicians” danced in lingerie at the center of the tent. The caterers brought out milk, cookies and then cereal. Sometime during the night, before the first guests began to trickle out at sunrise, before Peterson left with a handful of friends to continue their party elsewhere.

At the conclusion Peterson announced he and his wife were having his 8th child (6 different baby mothers).

He certainly nailed that one.

I looked up some tweets from his birthday party’s hashtag and it looks pretty awesome if we’re being honest. 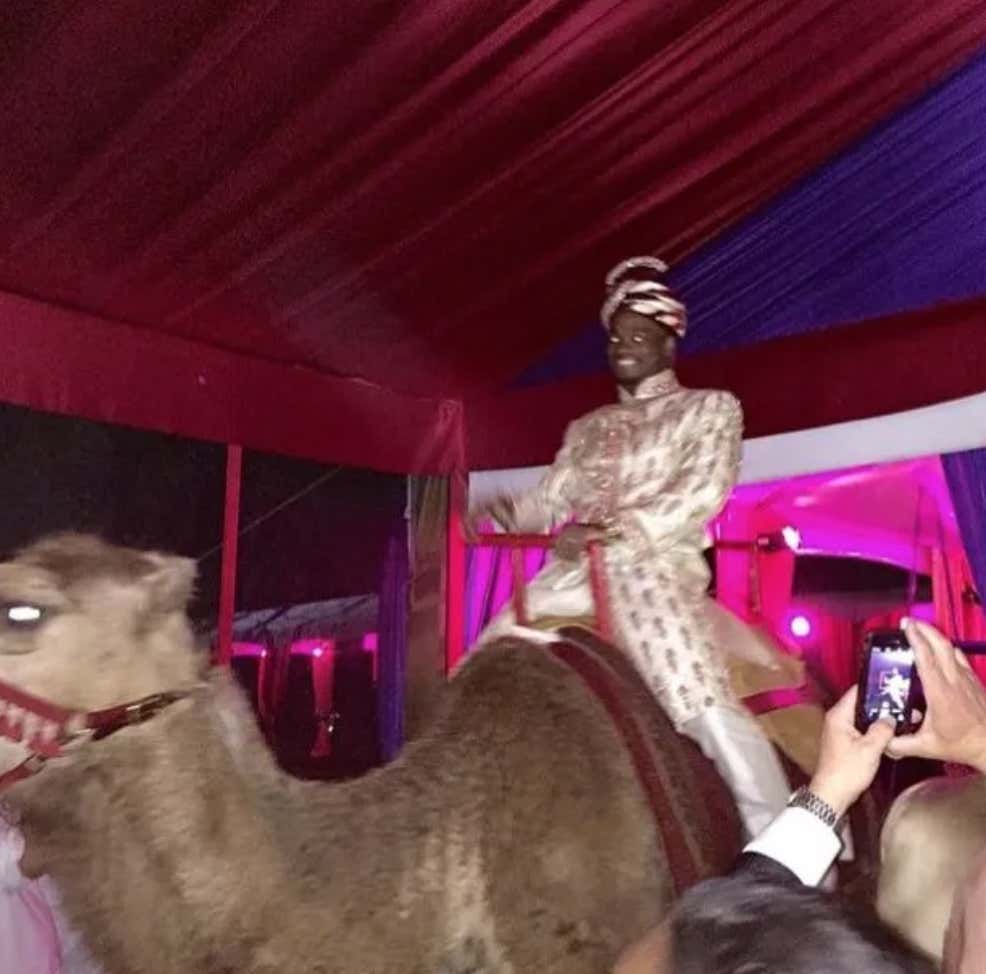 What an incredible picture. It makes me side with him. We all mistakes. If I had NFL MVP money, I’d probably throw a million dollar party at least once in my life too. You only live once and you can’t take the money with you. But suffice to say, people seem to think this was a pattern for Peterson. I think they derive that conclusion from the fact he blew through $100 million. So I can see how that hypothesis that he wasn’t good with his money might be true.