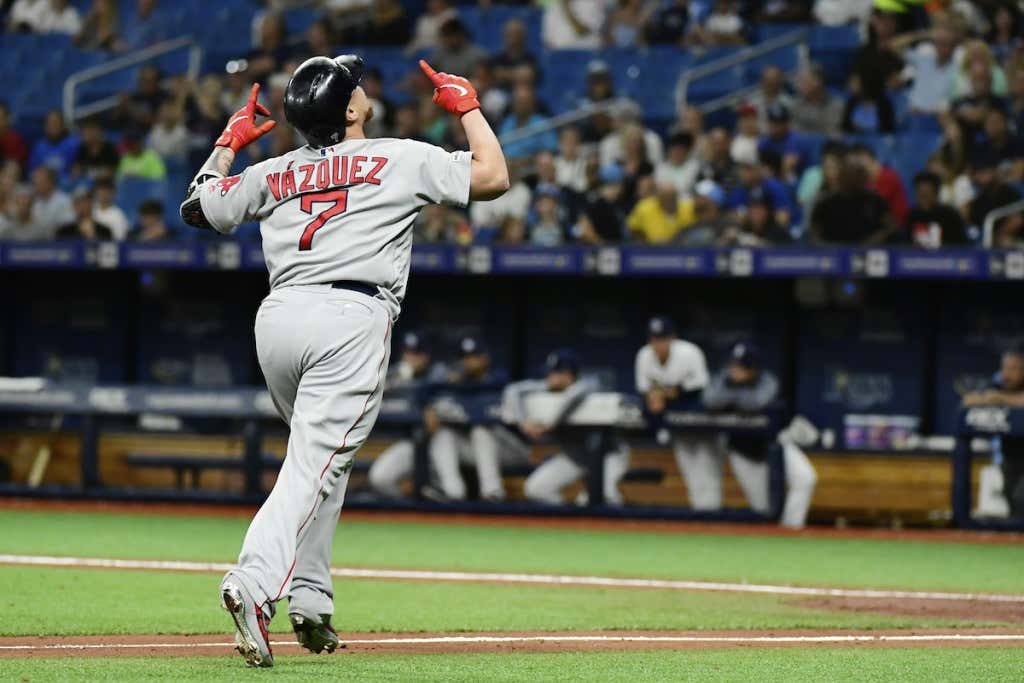 Two games in to their 14-game gauntlet against the Rays and the Yankees, the Red Sox seem to be responding well to the buzz that they could be sellers at the deadline if they don’t start winning. Two games, two wins, series victory secured, Rays caught.

In a way, October has started three months early for this team, but they only have themselves to blame for that. They’re far more talented than their record would indicate, but you heard guys in the clubhouse after the game on Tuesday night saying things like, “We know where we’re at in the standings.” Oh, ya do? Great! So now that we’ve established that, this has been an unacceptable season given the payroll, the talent, the expectations, and the overall health of this club. With their backs against the wall, I’d say now’s a good time to start performing like the team that’s on paper.

Chris Sale’s ERA, if the season ended today, would be the worst of his career, but he’s been a lot better than the ERA would suggest. After yielding two earned runs on four hits over six innings to the Rays with 10 strikeouts, Sale’s 3.2 fWAR is 12th best in the majors among starters and his xFIP is 2.93, which trails only Gerrit Cole and Max Scherzer. After punching out 10 batters on Tuesday, Sale has recorded at least 10 strikeouts in 12 of his 21 starts this year.

I saw some fans complaining about Sale’s pitch count, and how this has become somewhat of a recurring theme. That being the lefty approaching 100 pitches by the fifth inning and then having to turn it over to the bullpen for four innings, which is a death wish in 2019. Sale finished the fifth inning at 102 pitches and fought to come back out for the sixth — Alex Cora obliged. Sale got the first out on a first-pitch ground out, walked a batter, punched out Michael Brosseau and then out came Cora.

Cora actually started to motion to the bullpen before Sale spoke up. After the game, Cora revealed that Sale said, “Three more pitches.” When asked where Sale came up with that number, the ace said, “That’s how many pitches are in a punch-out.” Sale got the next batter, and finished off the sixth at a season high 116 pitches like a badass.

The thing was, Sale exited this game in a 2-2 tie but that didn’t last very long, as Christian Vazquez came off the bench to launch a towering pinch hit homer to put Boston out in front, while also putting Sale in line for the win. They’d later grab a couple more insurance runs in the eighth and they’d need every last one of them.

After seeing Nathan Eovaldi on Monday night, it’s clear that he’s not yet ready to take on one-run save situations in the ninth, so Brandon Workman was asked to get a six-out save. This would be the second consecutive appearance that he’d be asked to get at least five outs. Last time out, he got those five outs. This time, when asked to get six, Workman was only able to get five, as Marcus Walden entered the game for the final out. Why was he needed? Well, Workman started to sputter in the ninth, walking a couple batters and allowing a pair of runs.

But Walden got the job done, and the Red Sox jumped back into second place in the AL East for the first time since the second day of the season. They’re not yet in a playoff spot, but catching the Rays is huge. The A’s mounted a big comeback in the ninth in Houston, later winning in extras, so the Red Sox weren’t able to gain any ground on Oakland in the Wild Card, but catching the Rays was objective number one. Check.