So the fine folks over at The Athletic wrote a really good piece this morning about the striking resemblance between this year’s Cleveland Indians and the made up Cleveland Indians from 30 years ago that were portrayed in the movie Major League.

First of all, the parallels drawn are spot on. Ownership has been shedding payroll. The front office may trade our top pitchers. Our attendance sucks (23rd in the league). Jason Kipnis is old and needs ice packs on his knees like Jake Taylor. And Bobby Bradley can’t hit a curveball just like Pedro Cerrano. But through everything, the team has rallied together, is playing really good baseball and there’s only one thing left to do:

But aside from those similarities, the biggest takeaway I had from the article was how cool of a team the Indians are this year. They’re fun, but they’re not assholes like the fried chicken and beer Red Sox. They genuinely seem like they’re having a blast playing together every day and then hanging out afterwards. I mean, how many baseball teams have a constantly flowing full roster group chat?? We do.

No one can remember how or why exactly it started, but this is the first year the Indians have engaged in an ongoing group text with the entire roster throughout the season.

“Eighty percent of it is roasting each other,” Clevinger said. “Twenty percent is about baseball.

That sounds like a pretty fair split. You gotta be able to make fun of each other. Plus, how much baseball can you actually talk about? That’s what you do all day at work. But when it is time to talk baseball in the chat, I LOVE the topic….

The Twins have been a constant topic of conversation within the team’s ongoing group chat. Minnesota’s game is sometimes playing in the clubhouse now either before or after Indians games, depending on start times.

Hell yeah. We’re not shying away from it. We’re brutally honest about it. We’re gunning for these god damn Twins, and the players eyes are glued to their scores just as much as the fans are.

When guys aren’t talking about the Twins, they’re challenging each other with side bets. Trevor Bauer and Clevinger have often wagered over their velocity. Other veterans have joined in, challenging Bauer by offering $500 for a complete game. A home run on a certain night might be worth $200 to a hitter.

Now this is what I like to see. It’s not necessarily the bounty program that the Saints made popular, but tossing around cash to make the 162 game grind more interesting shows how cool this group is. I need to know more about it though. Does Bauer have to pay someone $500 if he doesn’t throw the complete game that night, or does he just get money from the pot if he does? Same with the home run situation.

But it’s not just pre-established wagering. There’s in-game betting, too.

Before the final out of Sunday’s victory against the Royals, after Brad Hand already recorded the first two outs on strikeouts, Kipnis crept onto the infield grass and hollered loud enough to get Hand’s attention.

“A strikeout is worth $100,” Kipnis said, bribing his closer into striking out the side. Hand nodded, then struck out Whit Merrifield to end the game. Kipnis paid up in the clubhouse.

I love this team. And that’s not even the best story. This one against the Royals is…

The largest pot anyone can recall occurred during Zach Plesac’s outing last weekend against the Royals. In his previous start at Kansas City on July 4, Plesac stopped the game to have a trainer bring out a towel so he could wipe down his arms and hands while on the mound.

Plesac wasn’t wearing an undershirt and he had shaved his arms just a couple of days before the start, so there was nothing to stop the sweat from pouring down his arms and onto the ball in the Midwest humidity. It was to the point that he had trouble with his grip, so he had to stop the game and ask for the towel.

Veterans started howling from the dugout immediately. No one, including Francona, had ever seen anything like it. Royals manager Ned Yost began barking about whether it was even legal, which the umpires couldn’t really address because no one had ever seen it happen before.

His teammates have worn out Plesac for weeks on the group text for the towel incident, and enough guys threw money into the pot that the rookie earning the league minimum could’ve won around $5,000 if he stopped the game over the weekend against the Royals and asked for a towel again. He declined.

I’m hooked on this Tribe team. The only thing they can do now to get me more hooked is put up a Major League style poster of management counting down to clinching a playoff berth. Except their ownership was much more attractive in the movie… 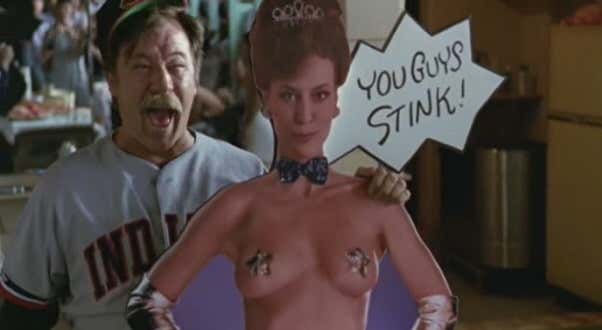