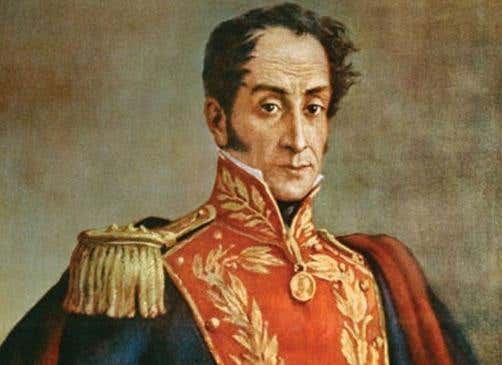 That dude right there, standing all of 5’6, is Simón José Antonio de la Santísima Trinidad Bolívar Palacios Ponte y Blanco, or more commonly known as just Simon Bolivar. Today is his birthday. A HUGE figure in the history of the World, but someone we never really studied in school because he was from South America and well we don’t give a fuck about South America in the United States school system.

He was born rich as hell. One of the richest families in all of South America at the time. He went to Europe to be educated at 16 right at the time of the Enlightenment and in the aftermath of the French Revolution. Big brain and blood thirsty he came back home to Venezuela and decided to kick the Spanish out of South America. He started with a country called “New Granada” which is present day Colombia and Panama. Then he was like you know what…

When it was all said and done he liberated Panama, Venezuela, Colombia, Ecuador, Peru, and Bolivia. A land mass greater than what was conquered by Alexander The Great. He also abolished slavery. Very woke for his day. His dream was to have one huge Spanish Speaking United States Of South America, but it never materialized and the countries he founded dissolved and decayed and South America had a ton of Civil Wars in the 19th and part of the 20th century. Good try though, Bolivar. Still a good career overall.

PS: There is a Netflix series about him right now. I tried to watch the first episode but it didn’t grab me. Here is the trailer if you’re interested