Tonight is one of those nights where I will bounce back and forth between the UFC and boxing because there are 2 legitimate Main Events being fought in the Tri-State area, and neither are Pay-Per-View. 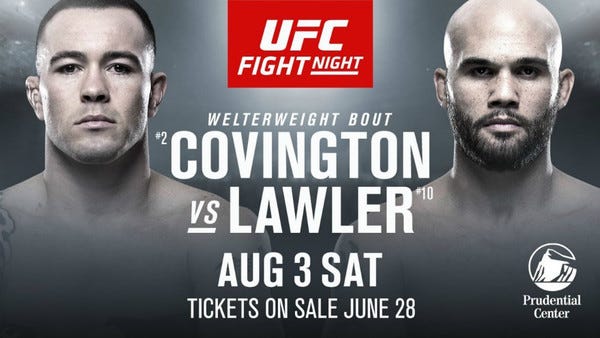 We were lucky enough to have both Robbie Lawler and Colby Covington in for interviews on Barstool Breakfast and watching that narrative form of good (Robbie) vs evil (Colby) has me intrigued.  They are fighting at the Prudential Center in Newark and it’ll be broadcast FOR FREE! on ESPN. 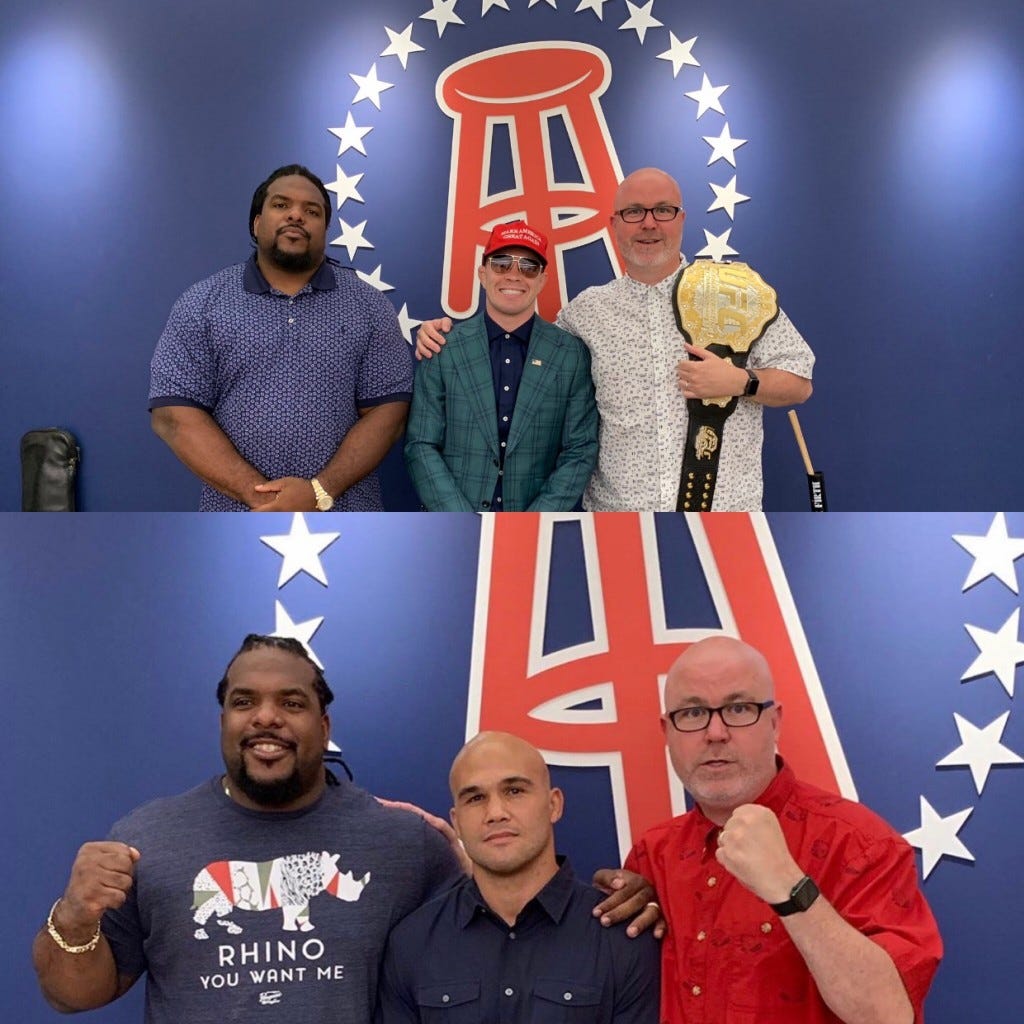 I am not sure if the whole ‘MAGA’ thing is an act for Covington because he resides in a division with many contenders but only one meaningful belt, so goofy “Make The Welterweight Division Great Again” antics are probably necessary to get him enough buzz that Dana is forced to give him a title shot vs Kamaru Usman.

I think you guys know I have an unhealthy affection towards Robbie Fox who refused to talk to Covington when he was in the office… This leads me to believe Colby truly is a special kind of asshole.  To hammer that belief home, in our interview, Colby said Lawler was the "Ultimate Feelings Champion" because he is so sensitive, and Covington also vowed to have sex with as many women as he could right up until fight night in order to keep his cardio up. 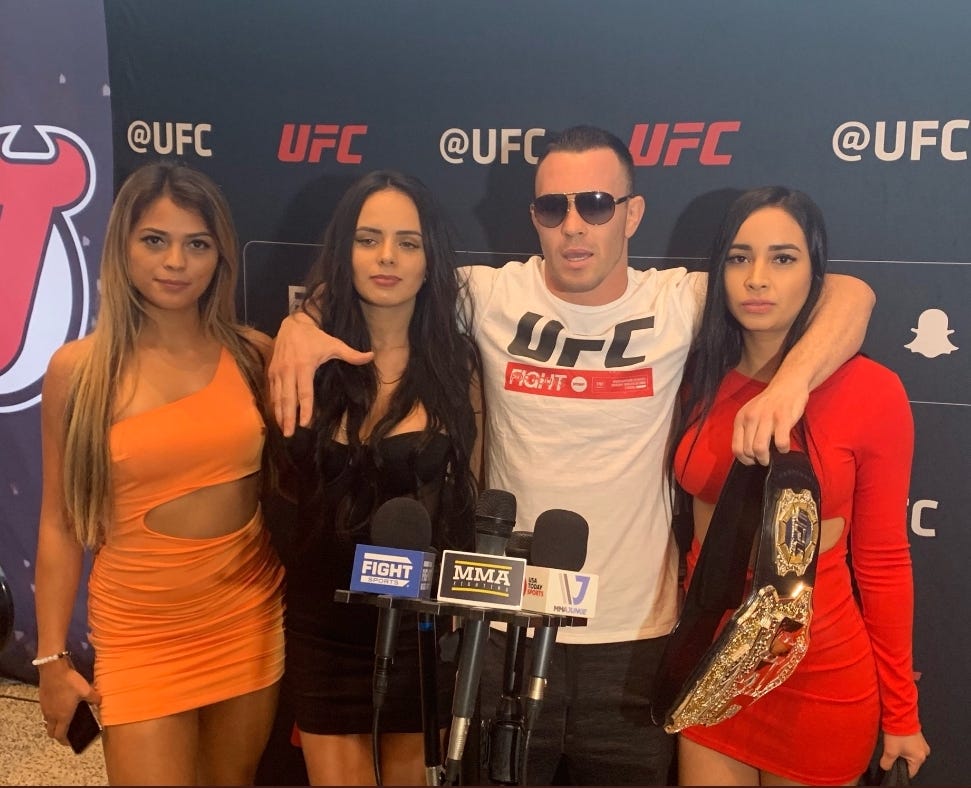 However, if these antics are all Colby has, Lawler is the type of reserved veteran who will expose any lack of skill, so it should be an interesting matchup.

I traditionally take grapplers over strikers, but Covington hasn’t fought in over a year and 37-year-old Lawler seems like he is reinvigorated to get one more shot at a title (especially after that botched decision vs Ben Askren), so I am taking the 2-1 underdog (Robbie Lawler) by KO.

Now on to Boxing.

Over at the Barclays in Brooklyn, we have a heavyweight boxing Main Event involving 2 names that should be familiar to most boxing fans. 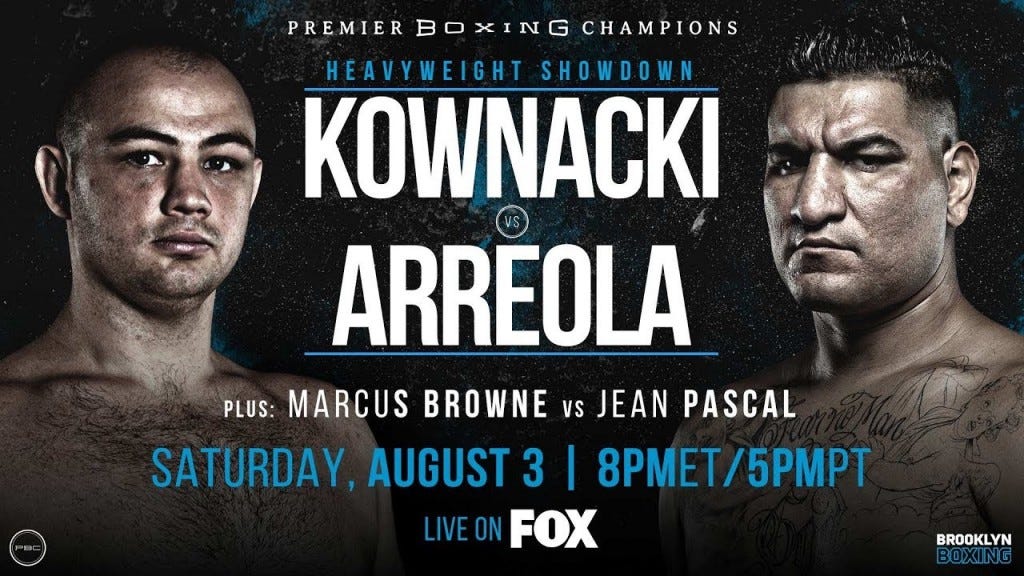 With a professional record of 38-5-1-2, 38-year-old Chris Arreola has been around for quite a while.

Here are the 4 things I remember most about him:

1) After a first-round KO of Eric Molina in 2012, he created some stir in the post-fight interview when he referred to Molina’s promoter Don King as a “fucking asshole and a racist,” prompting Jim Gray's asshole to pucker and Showtime to immediately terminate the interview.

2) He has 2 "No Contests" on his records after vacating 2 wins because of failed drug tests… But it wasn't PEDs… He got caught with marijuana in his system both times.

3) He's had three shots at a heavyweight title versus Vitali Klitschko, Bermane Stiverne, and (most recently) Deontay Wilder, but came up short on all 3 attempts.

4) He should really change his last name.

Chris spent nearly a year and a half away from boxing after his Wilder loss but has rattled off 2 victories since his return.  I have watched some pre-fight interviews and it seems like he has gotten his shit together going into this fight, and I am glad to see him both physically and mentally healthy again.

Chris’ opponent and tonight’s betting favorite, Adam Kownacki, is a slightly more interesting story. The undefeated (19-0) 30-year-old was born in Poland but raised in Brooklyn. He goes by the nickname “Babyface”, but only because “Sloth From Goonies” seemed too obscure and wouldn’t fit on the back of his robe.

Adam was the first person Anthony Joshua’s team reached out to for a replacement fighter earlier this year when Joshua’s opponent, Jarrell Miller, tested positive for PEDs. Adam’s camp passed on that title shot because it would have only provided him with a month to prepare, and like many heavyweights, Adam had put on too much weight in between his fights for only a month's worth of training camp to remedy.

I am sure Babyface regrets that decision after then watching Joshua get knocked out by an equally out-of-shape Mexican Michelin Man. 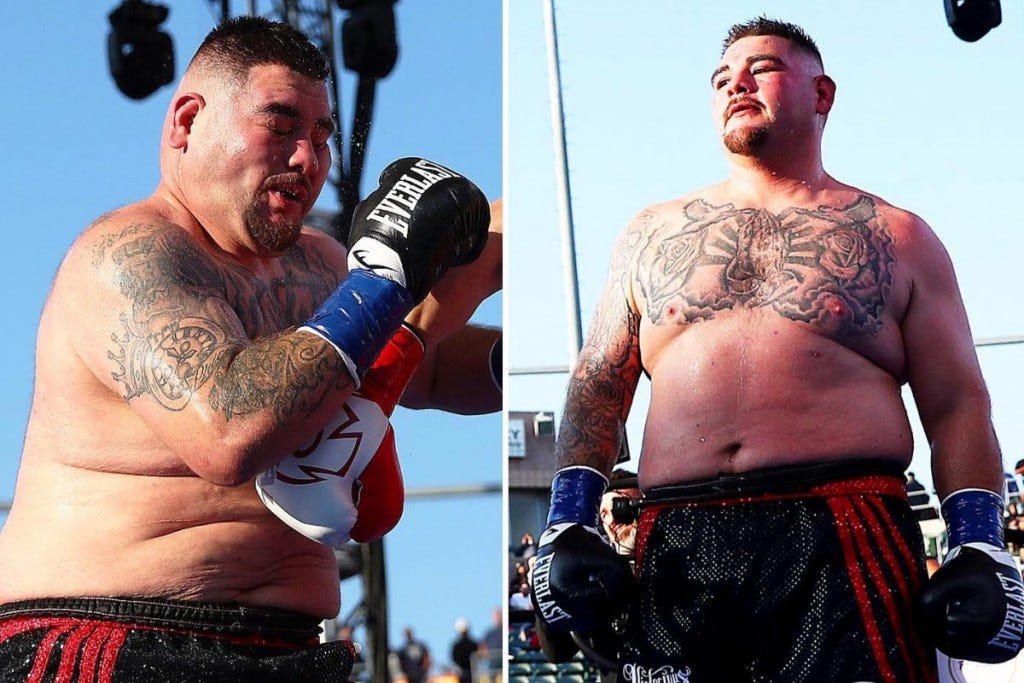 Still, Adam’s trajectory towards another shot at one of the Big 3 in the heavyweight division seems on track.  He just has to get by a seasoned vet like Arreola in order to prove he’s not just another bad Polish joke.

A teacher asks her only Polish student, “Lek, how many days of the week start with the letter 'T'?”

The teacher then asks, “And can you name those 2 days for us, Lek?”

Lek replies once more, “Sure I can... Today and Tomorrow.”

Kownacki is a brawler who tends to lurch forward in fights, consistently throwing straight punches as he tries to make the ring seem smaller. He eats a fair amount of punches in the process, and may someday have a tough night against Deontay’s wild overhands, but I think he’ll be effective against the similar brawling style of Arreola and we’ll probably see an early to mid-rounds KO.

TMZ reporting that War Machine is headed down the aisle… Although this time in leg-irons.

And finally, the big ending…

There has been a fair amount of death talk surrounding boxing lately, and that's not good.

The most tragic was the death of 28-year-old Maxim Dadashev 2 weeks ago… Nothing can be said about that because it's just a fucking shame that makes very little sense, but the sport will move forward.

The week before, Pernell "Sweet Pea" Whitaker was hit by a car in Virginia Beach.  I mentioned in a blog that Pernell was the greatest defensive fighter of my generation, and despite his many transgressions, his legacy within the sport is cemented.

In a fitting homage, one of the busiest fighters alive (and severely cross-eyed), Tevin Farmer, wore Sweet Pea's name on his trunks this past weekend and showed some Whitaker-esque head movement in his shutout of Guillaume Frenois.

This should all be old news to those still reading, but I only bring it up to give you a little history lesson…

Whenever I think about boxing deaths or tampering with fighters I think of one man in particular, and for the rest of this blog, I am going to make you guys familiar with the story of Panama Lewis. 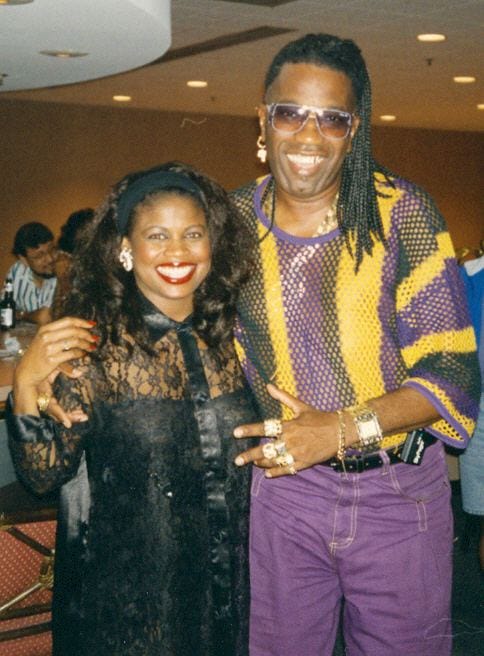 In the early 80s, there were 3 names that stood out as boxing trainers/cornermen: Lou Duva, Emanuel Steward, and Panama Lewis.  Lewis was in Roberto Duran's corner for a stretch, but his biggest success was training Aaron Pryor.

In 1982, Pryor defended his WBA light heavyweight belt against Alexis Arguello and Panama's comments in the corner before the 14th round began was the first documented example of Lewis' shadiness.  When a cornerman handed Panama a water bottle for Pryor, Panama is clearly heard on camera yelling, "Not that bottle, the one I mixed!"

I couldn't find a short clip of Panama yelling for the doped bottle, but I rolled by this clip of Pryor throwing a knockout left hand that started from his right knee…

Lewis was long rumored to mix stimulants into his fighters' water bottles, but that was the first time he inadvertently admitted it, and the rumor was confirmed years later by another fighter in Lewis' camp named Luis Resto.

Resto was a welterweight beyond his prime in 1983.  He had a record of 20-8-2 when he fought a young kid named 'Irish' Billy Collins (14-0) on the undercard of Roberto Duran’s WBA title fight with Davey Moore.

Collins was a small favorite coming into the match, and even though his opponent was never known as a hard hitter, Resto pummeled Collins from start to finish.

Both of Billy's eyes were swollen almost shut almost immediately, and the youngster took a quality of beating that nobody could've predicted. 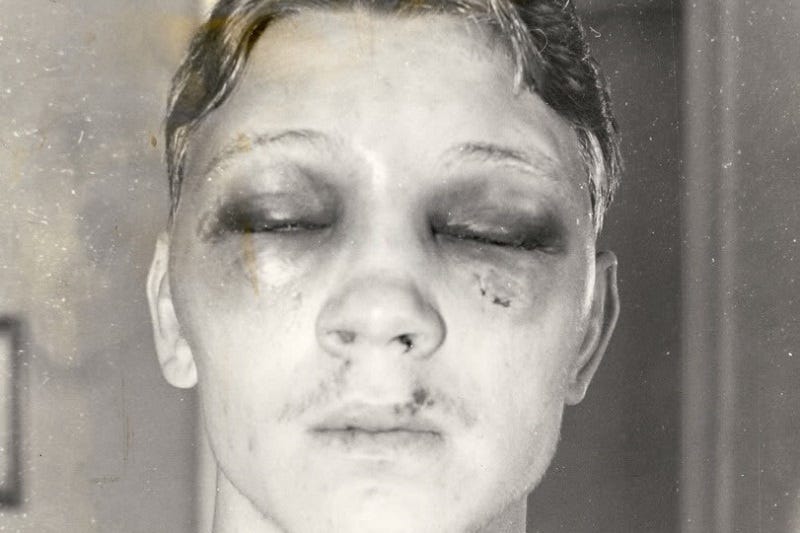 It wasn't discovered until after the fight that both of Luis' gloves had slits on the side of the palm and at least 2 ounces of stuffing was removed from either mitt.

And later it was discovered that Resto's hand wraps were laced with medical plaster, which activated once Luis began to sweat and turned his wraps into harden casts.

Finally, Resto disclosed that Lewis would also break apart pills used to treat asthma and pour the medicine into his water bottles, giving Resto greater lung capacity in the later rounds of a fight.

Collins suffered a torn iris and permanently blurred vision at the doctored hands of Luis Resto that night, thus ending his young and promising career.

To make matters even worse, Billy died only months later when he drove his car into a ravine.  He was drunk when the crash occurred and for most of his waking hours after the ability to box was taken away from him.   People speculated that the loss of his livelihood drove him into a downward spiral, and Collins' father has since speculated that instead of a drunken accident, that his son committed suicide.

In 1986, Lewis and Resto were both put on trial and found guilty of assault, criminal possession of a weapon (Resto's hands) and conspiracy. Prosecutors charged that Resto had to have known the gloves were illegal, and therefore the bout amounted to an illegal 10-round assault.  Lewis was sentenced to six years in prison, Resto to three.

Whereas Resto has come clean on the gloves, wraps, and water bottle, Panama Lewis maintains his innocence to this day, blaming the whole thing on a cornerman who has passed away years ago instead.

Plenty to talk about today and plenty to watch tonight… Enjoy the fights.

If you enjoy watching 2 heavyweights clash, you might want to also watch Glenny Balls and I tackle a couple of cheesedogs at The Breslin in this week's ExtraLarge on BarstoolGOLD…