Few things in life are as American as baseball and landing on the moon. Even the conspiracy theorists can enjoy this one because EVEN IF the moon landing was a hoax (it’s not, my dad said so) then you can appreciate that the underlying theatre conceived by the United States government included the astronauts checking in on their local team.

I’m sorry but I can’t help feel all warm and fuzzy, and that gets magnified by the Hall of Fame weekend. More on that below. For now: 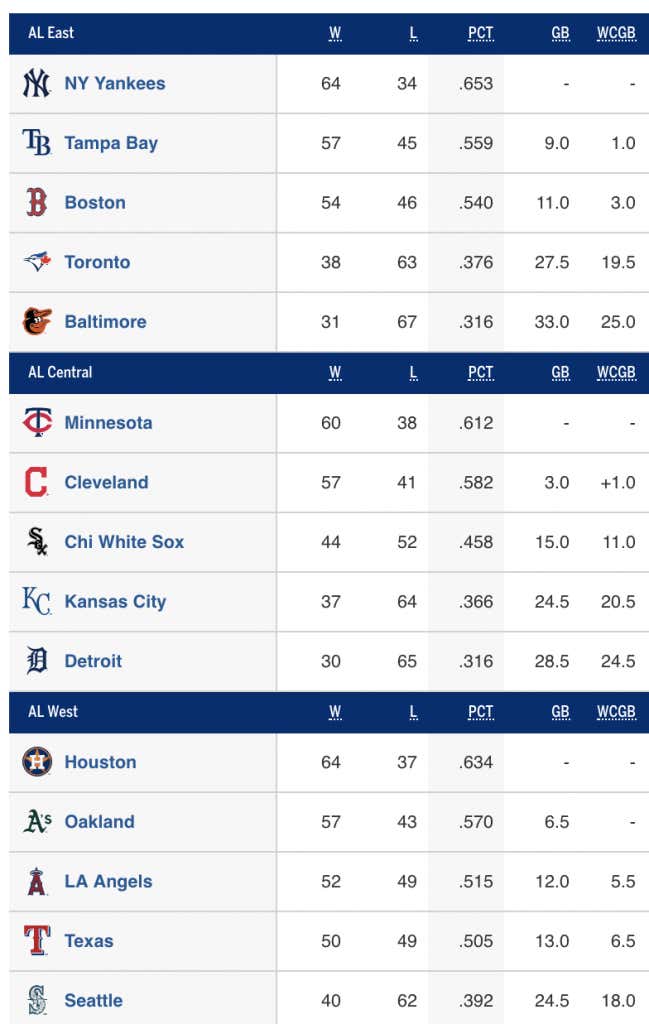 – The Yankees are pulling away and it’s kind of beautiful with how good the Rays and Red Sox are underneath them
– The Orioles took a series from the Red Sox this weekend which is laugh out loud funny for so many reasons
– The Indians are closing on Minnesota and that’s a function of the Indians lineup being en fuego. It’s a shame their pitching is so banged up because they could hang on to Lindor if they wanted. But the ownership is losing money like they always do and that means chopping block season starts somewhere. Would it be insane if they were sellers while holding onto a Wild Card? To most, yes. But smart people everywhere are smelling a huge haul for their core and now’s the time for it.
– The White Sox got smoked by the Kansas City Royals 20 times already this 2nd half (I think) but then took a series from the Rays this weekend which is why every White Sox fan should be frustrated as all hell. Good enough to be good. Shitty enough to stay shitty.
– The Rangers slipped big this week as anticipated out of the break. You don’t ride Lance Lynn and Mike Minor forever without regression
– If Oakland makes the West competitive then that’s the best long-term storyline of the American League. They’ve been aces since floundering at .500 thru the first 50 games of the year.
– Wild Card contenders: Tampa, Boston, Cleveland, Oakland, Angels and Rangers with a heavy emphasis on the 1st 4
– The divisions suck but the Wild Card is soooooo electric 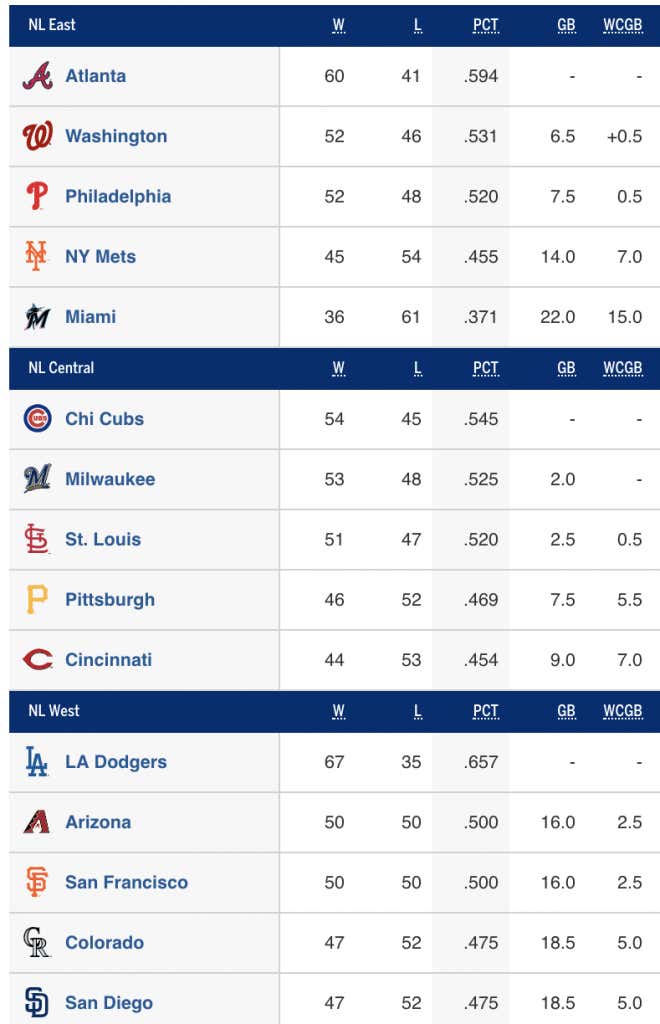 – Division races in 5/6 Divisions are yawn fests, but that doesn’t include the NL Central. If you combine Games Back from the NL Central 2-4 right now (12 games back), you have a closer race than the NL West and a comparatively close race to the AL East.
– Atlanta is getting better each week which is a scary thought
– I’d HATE to be a Nationals or Phillies fan as a result – this looks like a 5-7 year window of misery
– The Mets hopefully stay close enough to the Wild Card to torment its fanbase well into August
– The NL West reminds me of Big Ten football when Ohio State is fucking people up. Sure the Giants have history but really you know the Dodgers are the only team worthy of any big time discussion in the West
– Wild Card Contenders: I was wrong about the Padres two weeks ago – I thought they were trending up with more pitching depth coming up. Turns out they’ve been Rocks since the 2nd half so they’re firmly with Washington, Philly, all 5 NL Central teams and 4 other NL West teams fucking around. Similar to the AL, there’s not a lot of sex in the divisions but I do love the Wild Card action

What I Want To Talk About

The Twins probably drop a bit. The Padres stumble mightily. The Rangers proved me right.

So there’s your top 10 and a nice transition back to the point I was trying to originally make.

The Round Up blog is taking on a fluid shape. Like the T-1000 in Terminator 2, there’s no real foundation to this blog…

… save for some basic physical properties: gif of someone getting hit in the crouch, standings, observations, top plays and home runs, etc. But outside of that I want to start transitioning My Baby into more of an editorial once we get past the basic building blocks.

And to that I’m going to use it to talk about the shit in baseball over the week and weekend that should command your attention. In return it should make for a more entertaining blog with an emphasis on what my brain wants to talk about around the league. Expect little rhyme or reason.

Like for instance, Danny Vogelabch is indeed a unit:

3rd in MLB in Fly Ball % and 15th in HR% which isn’t too shabby for a guy the Cubs traded for Mike Montgomery then would later flip for defensive minded back up catcher Marin Maldanado. Not saying it’s a bad trade for the Cubs just saying when you follow a player’s path like Vogelbach, it can be confusing and frustrating. But in reality he doesn’t turn into the guy he is without getting passed over. That kinda shit drives you to get better and I’m sure Danny Vogs would be the first to admit it.

Although watching Macahdo for a full series was a delight. The guy plays the easiest 3rd base I’ve ever seen. Almost like he’s got a lot of better things to do with his time and $300M contract.

It’s easy to trash but there’s something to be said for a guy who can make 3rd base in the big leagues look at easy and disinteresting. Imagine being that good at anything not including gassing beers and jerking off.

Now also imagine you have Javy Baez’s opposite field power

Give me Simmons hands 100 out of 100 times. He’s the most underrated, undertalked about player in baseball because he plays in Mike Trout’s shadow and they’re not even that good.

If he was on the Astros, everyone would talk about him because you wouldn’t have a choice on this team:

Unfortunately there’s no room on the Astros. Everyone they bring up is better than the guy they’re replacing, like Yordan Alvarez

He leads everyone in every category, and while that’s an exaggeration, it’s definitely not one to say he has AL Rookie Of The Year locked up while the Diamondbacks have the award for Something I’ve Never Seen Before Ever In My Life

Speaking of getting pissed off, imagine being a Reds Fan in the 6th inning on Friday

Or imagine facing Justin Verlander and thinking he was on some kind of performance enhancing substance/routine that allowed him to never age or get worse:

That tweet is from 2019 not 2009 which is absolutely MARVELOUS because Pete Alonso was in 6th grade.

Speaking of curfews and deadlines, Madison Bumgarner has not been traded

Kinda weird but he’s an exceptionally weird guy so who am I to judge. At least he’s true to himself like Mike Leake throwing 86mph fastballs

Or Yeli never slowing down because he’s a machine from another planet that doesn’t do steroids but instead has geocentric lasering in his brain that finds the sweetspot every time.

ALRIGHT VLAD WE GET IT

The pride of the south side right now is the tough catcher who writes his own scouting reports and hates me-first baseball. Go Figure he’s a Baseball Nerd.

Maybe he can explain this pitch?

El Mago is Spanish for The Magician.

Yabo is Spanish for COME GET SOME

I like the Cubs vs. Yankees in a game 7 right now. See you guys next week.