So the Yankees lost yesterday, James Paxton stunk, blah blah. Still a billion games up in the division, Sox got 1 hit by the O’s today. Whatever. The real story was this Aaron Boone press conference. I almost called it a “Must Watch.” I’ve watched it 100 times.

Aaron has had himself a week. Monday was the worst loss of the season. Tuesday was a top 5 win of the year. Then there’s the ‘Fucking Savages’ ejection on Thursday. It’s really hot out. The dude just wants to get on the team plane to Minnesota and take a nap. He deserves it. All he has to do is get through this press conference. Easy right? Nope. All of a sudden comes this guy pops outta nowhere and initiates chaos. He starts out completely fine, and then I don’t know what happens.

“Aaron for the club, how important is it for them the inspiration bringing to them when you guys take…”

The moment he says “take” we enter a different world. I mean that’s just not a language spoken on this Earth.

Boone is trapped. He had to say something, but he had no idea how to go about doing that. 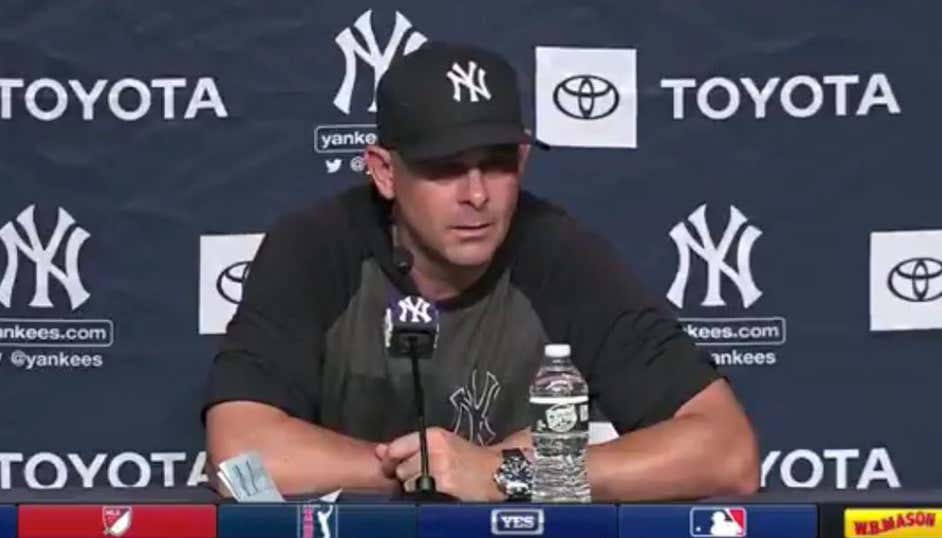 That stare is just pure disbelief at what’s happening. He probably thought at that exact moment he was never going to leave the press conference, ever. That was going to be the end of his life. There’s no worse feeling in the world. Boone’s probably thinking in his head where the fuck is our translator? What is going on?

It actually kept going for a little longer. Poor guy.

Aaron Boone has had to deal with a lot of shit as manager of the New York Yankees. Nothing, and I mean nothing, has been harder for him than getting through that question. He can accomplish anything now. He’s done the impossible. I know the Yankees lost today, but Boone had to go back to his office feeling like he won.