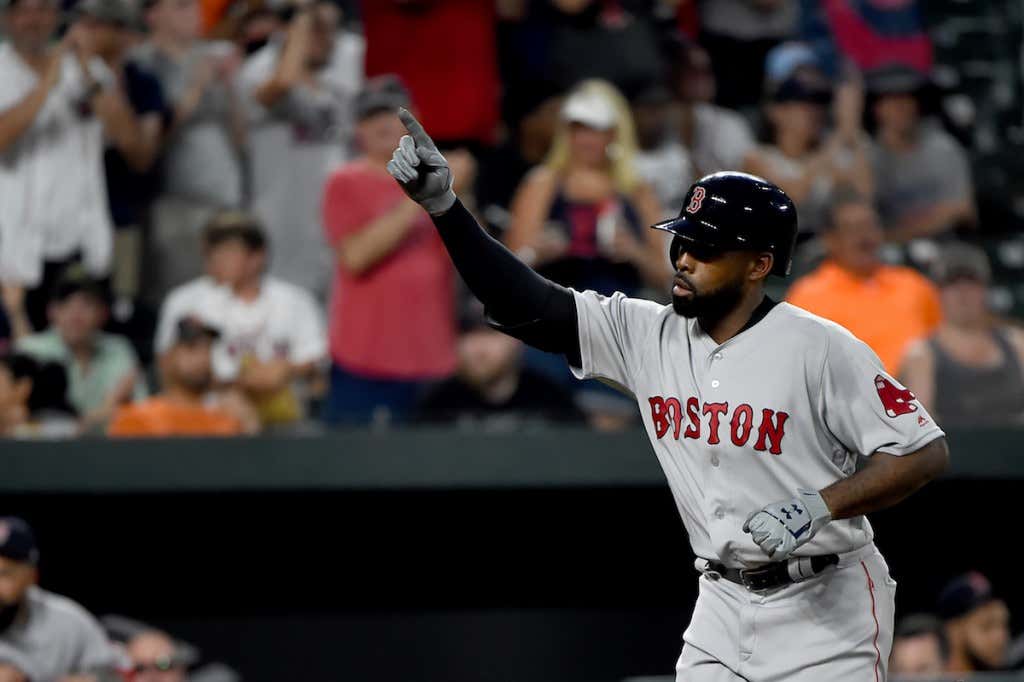 After losing 11-2 in the series opener in Baltimore, one of my main takeaways was that, selfishly, the Red Sox had to take all three of these.

Not just because of how much the Orioles stink, but because of the schedule that lies ahead — three in Tampa, four at home against the Yankees, three more at home against the Rays, then four more in the Bronx. Say whatever you want about the deficit in the division, but the Wild Card is still very much in play and the stretch of games after this O’s series could make or break the entire season. That’s why you needed all three of these gimme games at Camden Yards.

But if you’re going to get your doors blown off by what will eventually go down as one of the worst single seasons by a team in the history of the sport, then the best way to respond to that would be to return the favor. The Red Sox did that and then some, making the deficit in this game the same number of runs that the Orioles put up on Boston the night before.

Jackie Bradley Jr. had not one, but two three-run homers in this game in the second and the fourth innings. As you might’ve noticed, Bradley started off the season like dog shit, hitting .144 with a .421 OPS entering play on May 20. Since then, the centerfielder is hitting .292 with a .947 OPS, 11 homers and 15 doubles in 51 games. Over that two-month stretch, Bradley joins Rafael Devers (1.060) and Xander Bogaerts (1.059) as the only qualified players on the Red Sox with an OPS of .900 or better.

Speaking of Devers, the 13-year-old went deep AGAIN, his eighth home run in his last 15 games, all coming in the month of July, a month in which he’s seventh in the majors in OPS (1.202). After homering again on Saturday, Devers is tied with Mike Trout for the most homers in the majors this month, two behind Yuli Gurriel for the major league lead.

The guy that the Red Sox have desperately needed to get hot has finally gotten hot, and his name is Mookie Betts. The reigning MVP went 3-for-6 with a bomb and leads the majors in hits this month with 26. Maybe he took offense to those who said that he shouldn’t have made the All Star team. I don’t know what lit the fire under his ass, but it’s there and thank God for that.

On the downside, Rick Porcello stunk again. His last five starts have been absolutely atrocious, including the six earned runs that he allowed to the Orioles on Saturday night over five innings. Porcello was handed a 5-0 lead after three innings and promptly gave all five runs back in the bottom of the third. Over his last five starts, the right-hander has allowed 27 earned runs in 23 innings. That’s a 10.57 ERA with a 2.09 WHIP. You read that correctly — Porcello is allowing a little more than two base runners per inning over his last five starts, ballooning his ERA to 5.61 on the year.

While there are a number of issues going on with Porcello, the main one seems to be his fastball. It’s not fooling anybody. Last year, opponents hit .251 with a .743 OPS against his fastball. This year, they’re hitting .312 with an .817 OPS against the very same pitch (or pitches plural, since we’re combining four-seamers and two-seamers). It’s even worse when his fastball is in the zone — .341 with an .884 OPS. Hitters are just teeing off on him. It’s not a velocity issue either, as his 2018 average fastball velocity (91.75 MPH) is almost identical to his 2019 average fastball velocity (91.62). This is a movement and location issue. His fastball is flatter than Taylor Swift’s ass.

I don’t know what the Red Sox do from here, because if he can’t handle teams like the Blue Jays, Tigers and Orioles, then how are you going to trot him out there against the Rays and the Yankees when the season is on the line? You could hide him on the injured list for a couple of weeks, but then who takes his place? Me? You? It’s a problem, especially when it’s not like the other starters in the rotation are pulling his weight for him.

If Porcello is gonna figure it out, he’s gonna have to do it against two of the teams that stand in the way of Boston’s entrance to the postseason for a fourth straight year.