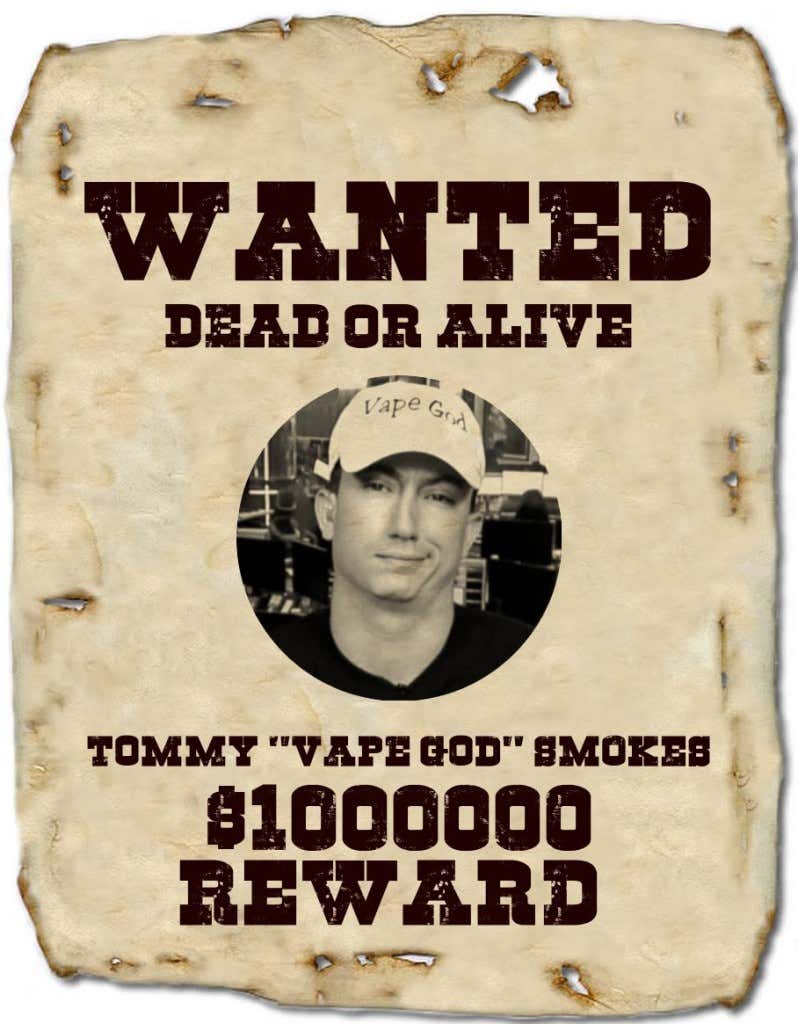 For the second time in the past eight months, I am public enemy #1 in the vape community. It’s mostly amusing, but also a little bit frightening to a degree when I’m getting actual death threats online through my DMs and mentions. It stemmed from my video earlier this week where I went to the National Vape Expo.

Here are some of the highlights of the messages I’ve been receiving since then. 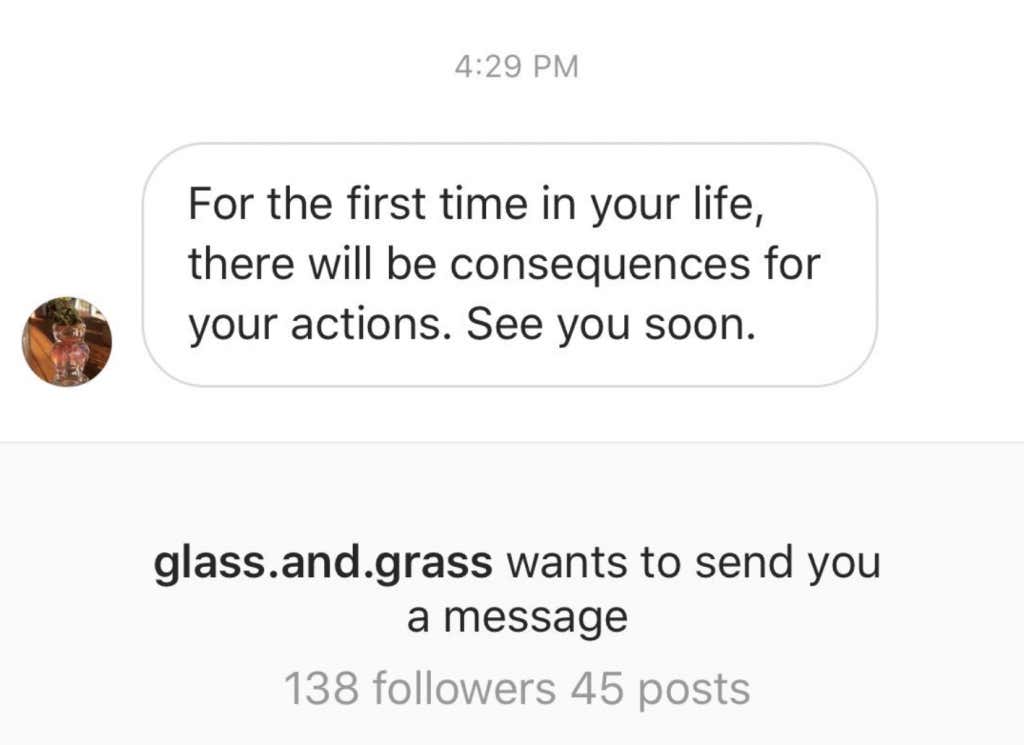 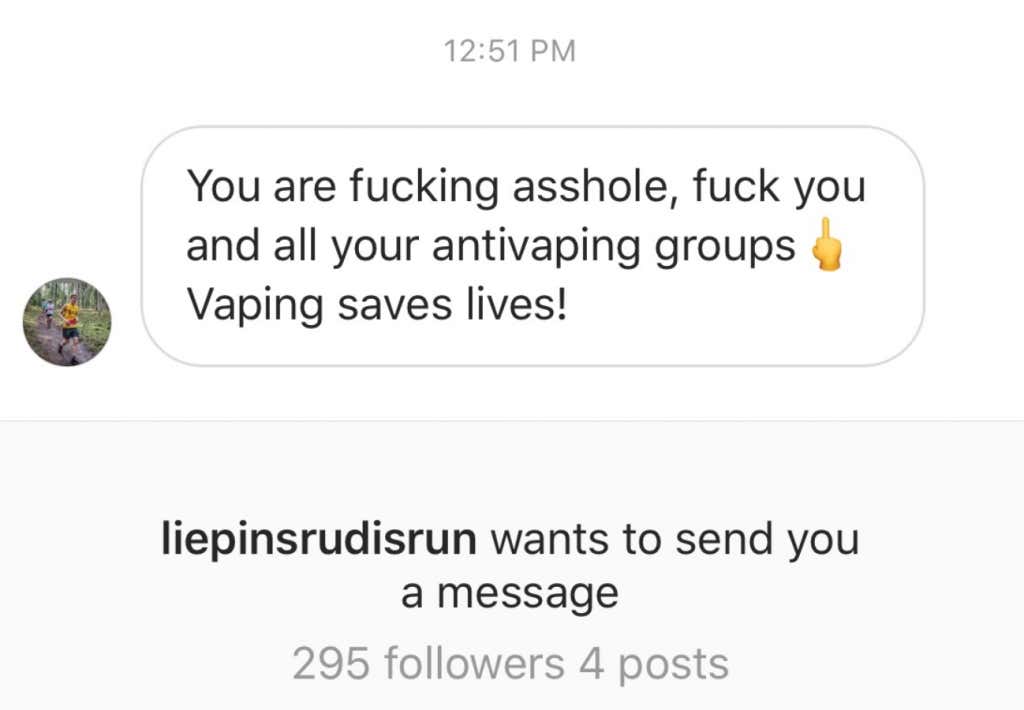 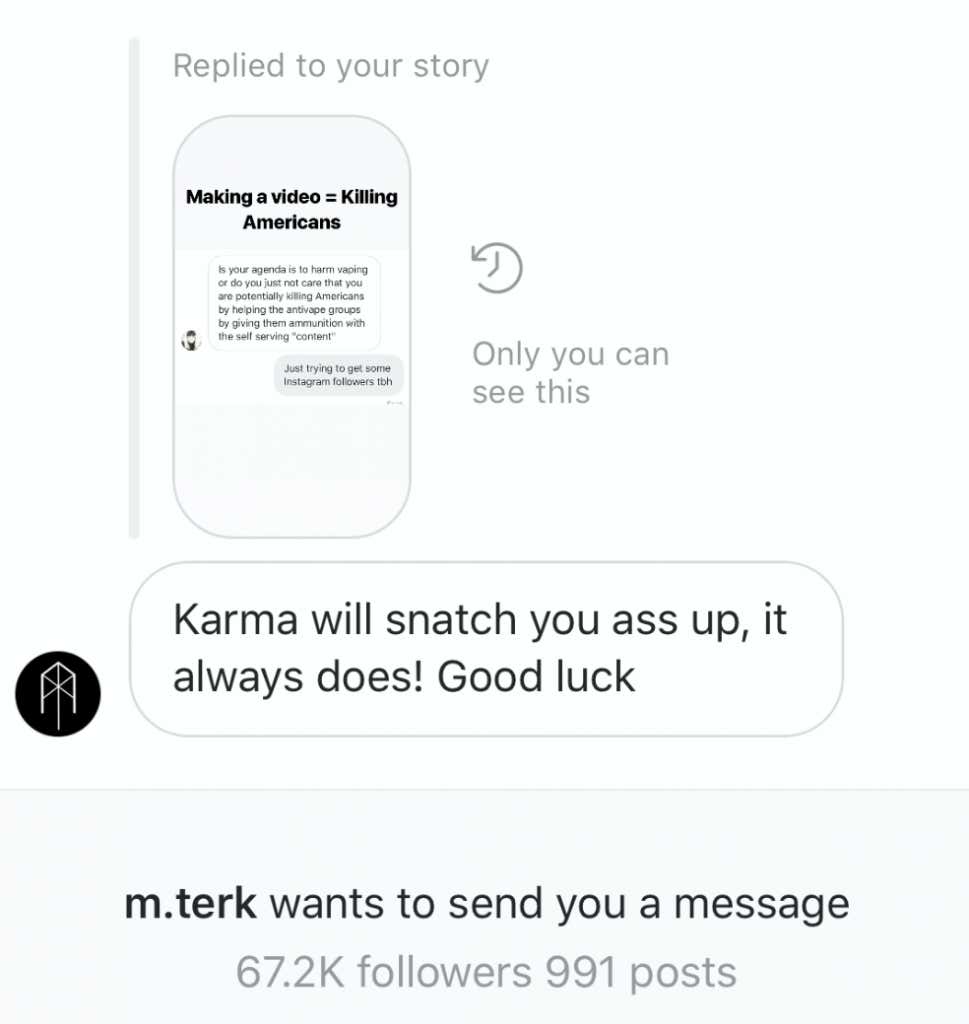 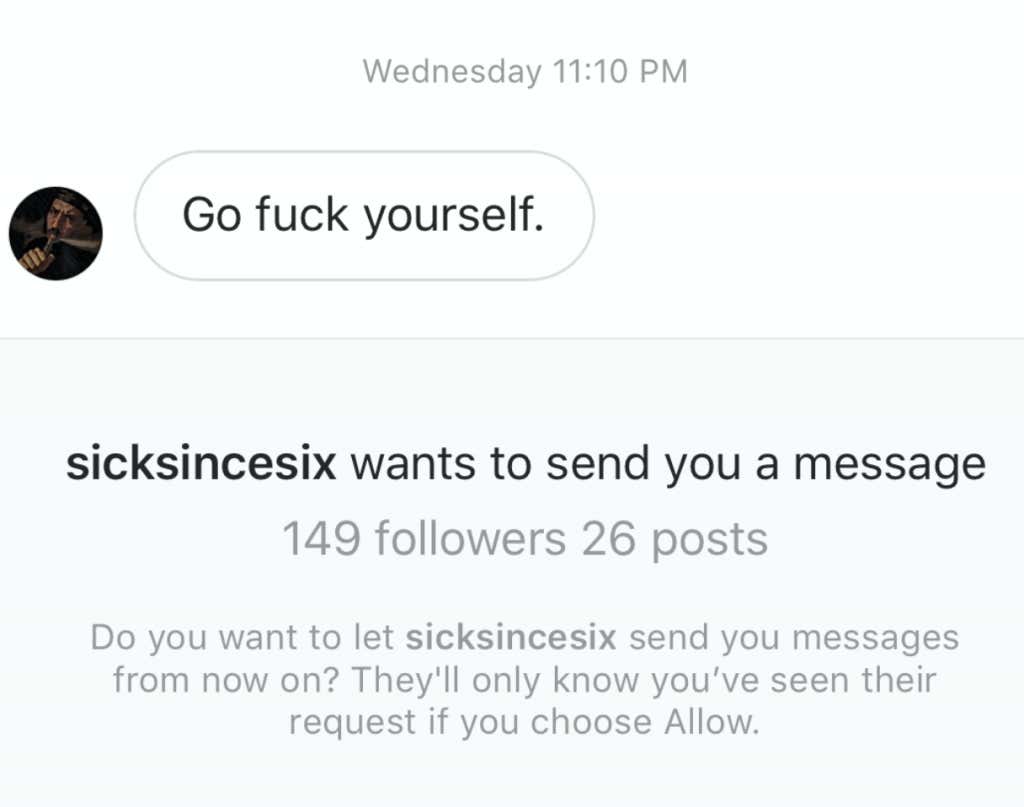 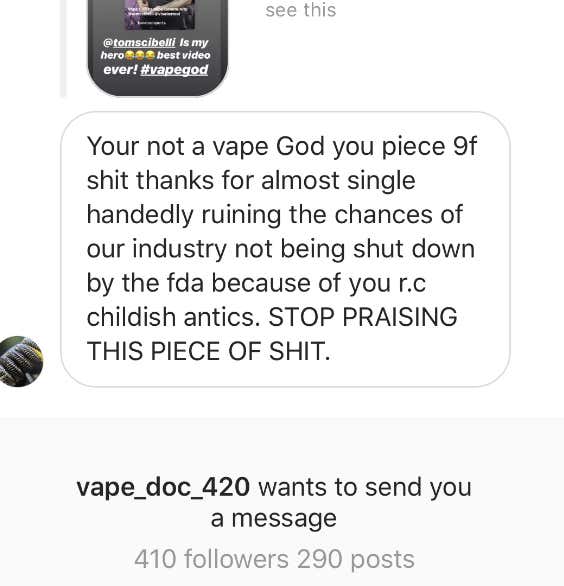 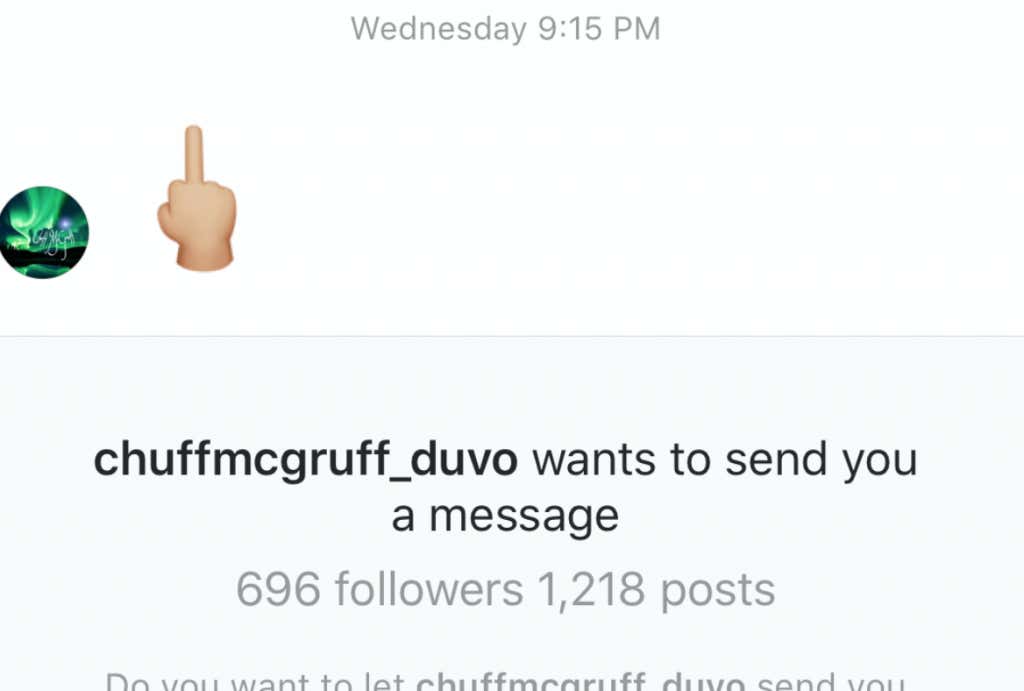 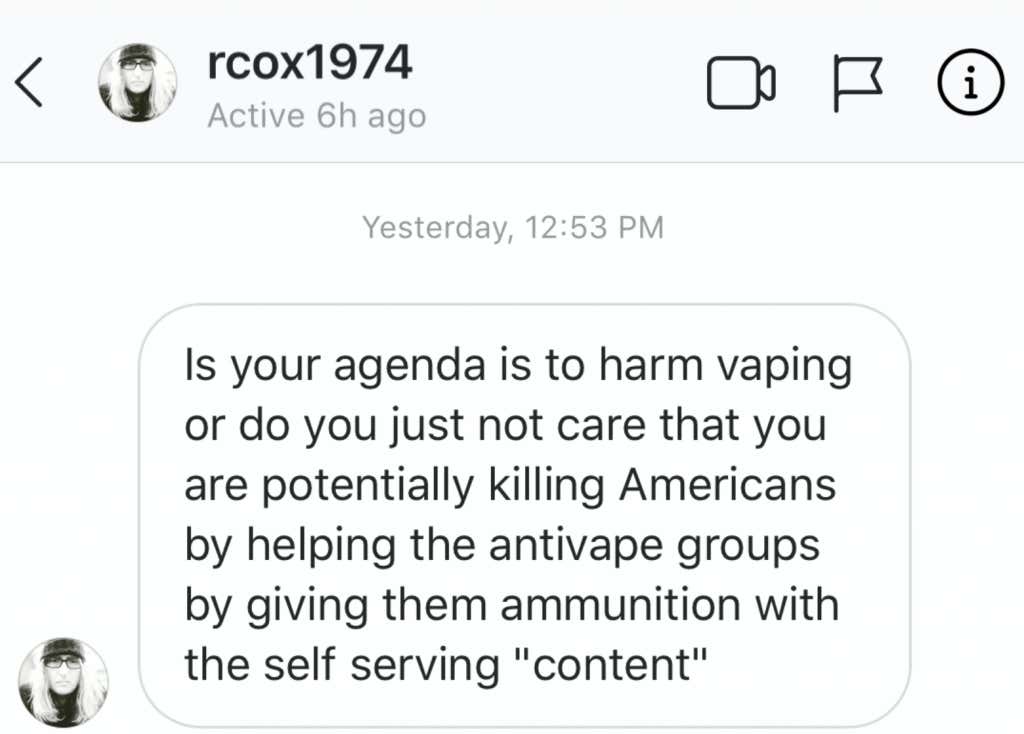 So yeah, I’m not exactly the most popular guy among these people at the moment. I get that the “Vape God” character can be seen as a negative stereotype of the vaping community, but to act like I’m killing THOUSANDS of people and somehow single-handedly bringing down the vape industry is insanity.

I work for Barstool Sports, a comedy company. I don’t work for the vape industry. Back in November, I made a humorous one minute Juul tricks video set to Sicko Mode to boost my Instagram following. That led to a Fox News producer for The Ingraham Angle asking me to come on their show and represent millennial vapers. Working for an Internet company, my goal was to make a viral clip that we could share. It wasn’t to be a mouthpiece for the vape industry. Blame them if you want for choosing me to represent your side of the debate, but I went on there to make the segment viral. Millions of Instagram views, some news articles, and one SNL skit later, my job was done.

Vapers flooded my DMs back then accusing me of being a paid actor for big tobacco or some shit like that. Not at all the case. After a while, things died down. About a month ago, I found out about the National Vape Expo happening at the Nassau Coliseum. Given that it’s 15 minutes away, I knew it was a no-brainer to go do a video there dressed in my Vape God outfit.

I wasn’t exactly sure what the reaction would be. I figured most people had forgotten about it, or never saw it in the first place. I did expect some pushback though. I assumed there’d at least be a few angry people that I could talk with and make the video more entertaining. That’s what I was there to do: make a funny, entertaining video for the comedy website I work for. I wasn’t there to represent big tobacco and shut down vaping.

We interviewed a bunch of interesting people and got their stories. A lot of that did make the final cut. In the four minute confrontation clip I had with The Reaper, he was able to get a lot of his valid points across that showed the positive sides of the vape industry. Yes, I was making jokes along the way and “trolling” him, but I still let him get all his information out there as I just made funny comments. I didn’t tell him he was a piece of shit for vaping. I didn’t tell him he should go back to cigarettes. I didn’t tell him the vaping industry should be shut down. I just made some wise-ass remarks and dropped some buzzwords that I knew would incite him and lead to a better video. And it worked. Between Instagram and Twitter, that clip has been viewed about 3 million times.

So The Reaper was able to get his message out there to way more people than he would have if I didn’t go there, make that video, and push his buttons. Maybe I should be getting “thank you” messages from these people instead of death threats.

There are people out there who legitimately believe that I’m responsible for killing people. I can’t even fathom that line of thinking. I’ve made a couple of funny videos about the industry. I’m not out there lobbying Congress to shut down vaping.

And guess what? If you care that much about health and saving lives, then you can just stop fucking vaping altogether. It’s healthier than cigarettes and is a good way to quit, sure. But if you’re really all about health like you guys claim, you can just do neither and be even healthier. I won’t pretend to know all the side effects of vaping because nobody does, but I know it’s not good for your health. Better than cigarettes? Yes. But the jury is still out in the medical community about just how bad it is, and it’s clear that it’s still not exactly a fucking multivitamin. So don’t misplace your anger on me because you have a nicotine addiction.

One more thing I’d like to address is their claim that blowing clouds and doing tricks isn’t what their industry is about. In my video, The Reaper claimed “it’s not about blowing fat clouds.” Is it the main thing? Not for everyone. But that is a major part of the vape industry whether they like it or not. And it seems like they do often like it when it’s convenient. The official afterparty to the National Vape Expo was a CLOUD AND TRICKS competition. The Reaper promoted the event on his own god damn Instagram page. 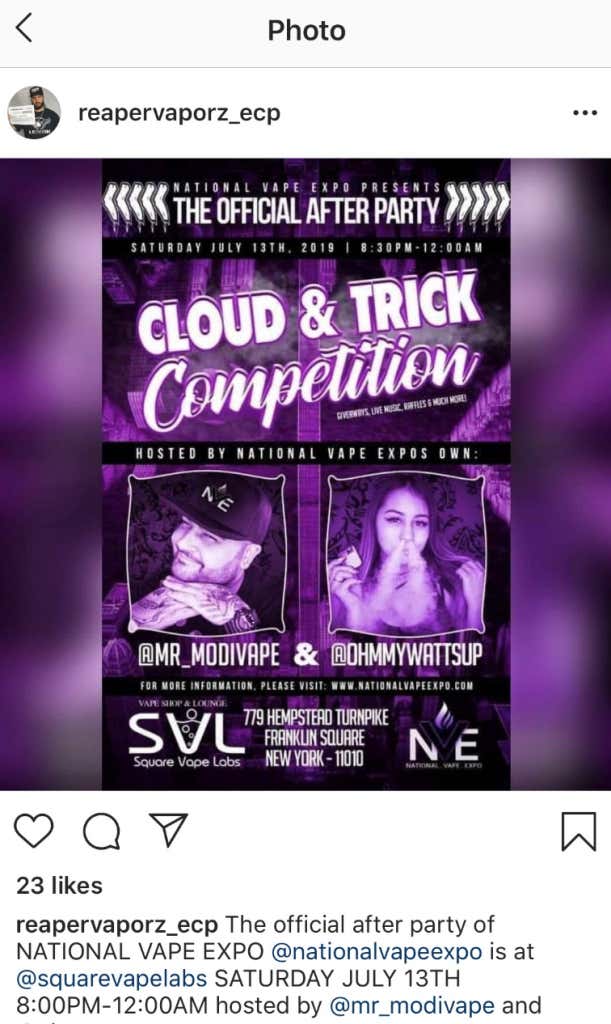 That’s right. The guy who had a problem with me talking about blowing fat clouds promoted a clouds competition on his own Instagram. I feel like I’m taking fucking crazy pills here. And it’s not just him. Any time I go to the profile of one of these vapers coming at me, they almost always have some pictures of them blowing these fat clouds that they hate so much. Maybe it’s not the main reason you vape, but to act like that’s not all a huge part of the industry is just ignorant.

The Vape God character does represent a significant part of the vape market. There are a lot of people who vape just to blow clouds, do tricks and unironically try to help their “swag” and “drip.” They contribute to a ton of sales and can’t be ignored. The bottom is line you all want to vape so maybe come together instead of vilifying a huge part of your community.

That’s all I have to say. Please don’t actually kill me.

For those that do have a sense of humor, buy our new fat clouds t-shirts.