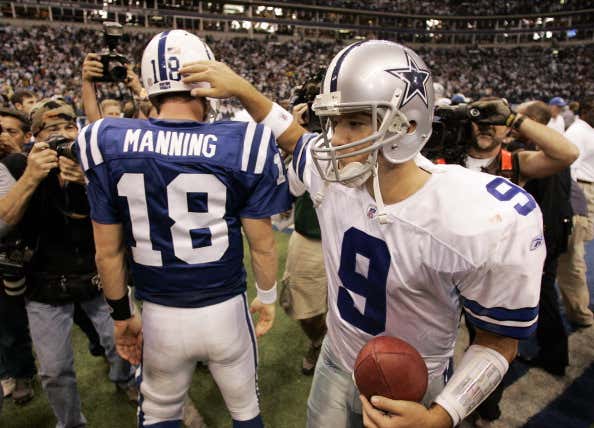 The former Cowboys quarterback opted not to fire back at Peyton Manning’s jab, insisting he’s merely excelled at broadcasting because of his passion for it, and not because he was focused on it previously.

Manning, who passed on a job as a “Monday Night Football” analyst because he didn’t want to analyze brother Eli’s play, seemed to take a recent jab at Romo.

“I saw where Tony Romo said that he always knew that he wanted to be a broadcaster,”Manning said, according to CBS Radio. “Well, I always knew I wanted to be a football player. That’s all I knew. I was all-in on that job. I didn’t think about anything else while I was playing.”

Romo, the lead NFL analyst for CBS, responded in an interview with 105.3 The Fan in Dallas.

“I actually hadn’t heard those comments. I like to tunnel the little bubble I live in. But, ultimately, that’s something I never actually said,” Romo said. “I didn’t start thinking about being a broadcaster until I was contemplating retirement. And so at that point, then you’re going to start thinking about your next stage.”

I’d like to respect Tony Romo for taking the high road. Except in this case, it’s totally unnecessary.

What we’ve got here is a perfect example of Peyton Manning Unfiltered. When he’s not being scripted by the marketing department at some insurance company. Or by the writing staff of the ESPYs. Or of Saturday Night Live. This is him being him. An insufferable twat and an egomaniac who can’t stand the fact that a lesser quarterback like Romo became as good an analyst as there is on TV right now. A guy who can make calls in real time that can predict what a team is going to do in a high leverage, pressure situation with startling accuracy:

While Manning takes a hard pass on the “Monday Night Football” job by claiming he’s worried about critiquing his brother. The one who’ll probably be wearing a Giants hat and holding a Microsoft Surface while Daniel Jones lines up behind center.

But that’s the Peyton Manning I’ve always known and never loved. The real Peyton. When he’s not using his “private” letters to other athletes to sell high fructose, electrolyte filled energy drinks. Or bitching out his teammates. Or forcing his coaches to completely revamp their offensive schemes to suit his needs. Or sending his goon squad to the house of the parents of the man who said in a secretly recorded interview that he sold him HGH to intimidate them into silence. Or who took the occasion of winning the Super Bowl to plug beer and shitty pizza.

Imagine for one second if another quarterback accused Peyton of using his career as a springboard to be America’s Pitchman. If some QB suggested Manning wasn’t totally focused on football toward the end, but was instead setting self up for a post-football life of giving the nation diabetes, that man would be charged with a hate crime. Because no celebrity has ever been as inexplicably beloved the way Peyton Manning has.

In this dispute, I’m on Team Romo all the way. I just hope he drops the “high road” nonsense and fires back at what a fraud Manning is.