Finally someone steps up to tell the truth. Notre Dame was the second best team in the country last year. That’s not me talking. That’s not Lou Holtz talking. That’s coming from a source who is actually qualified to give an opinion. A football guy who was actually in the trenches. And if you remember, that game was basically a stalemate until Julian Love got hurt in the first half. After that it was the closest 30-3 game I have ever seen. 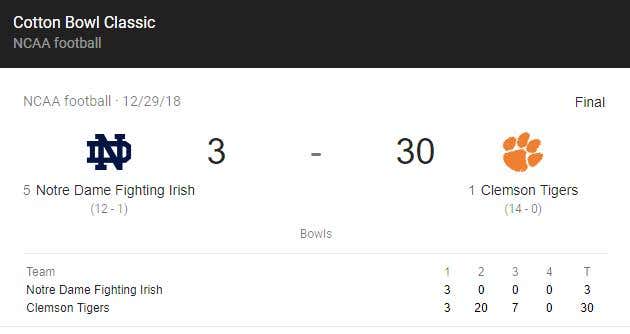 One bad quarter thanks to a few big plays. Not too shabby against an absolute juggernaut. Brian Kelly had a pretty similar quote.

“It was an 80/20 game for us. Eighty percent of the stuff we loved. It was about 20 percent of the things we wish we could have been better at. Their skill was outstanding. That’s the next challenge for us to take the next step.”–Brian Kelly

20% away from a National Championship. That’s two yards in football guy math. A fullback dive. Notre Dame is a fullback away from being the best team in the country. Real football guys can look at a game like that, a score like that, and know that the truth was still that Notre Dame is one of the very best teams in college football. It’s only the haters and the simpletons who don’t know what they’re watching and react in a way that only makes them look stupid

We are only 42 days away from the uNDefeated blog. Against a blue-gray October sky, Notre Dame will rise again. Looking forward to a rematch with Clemson in the playoffs this year.