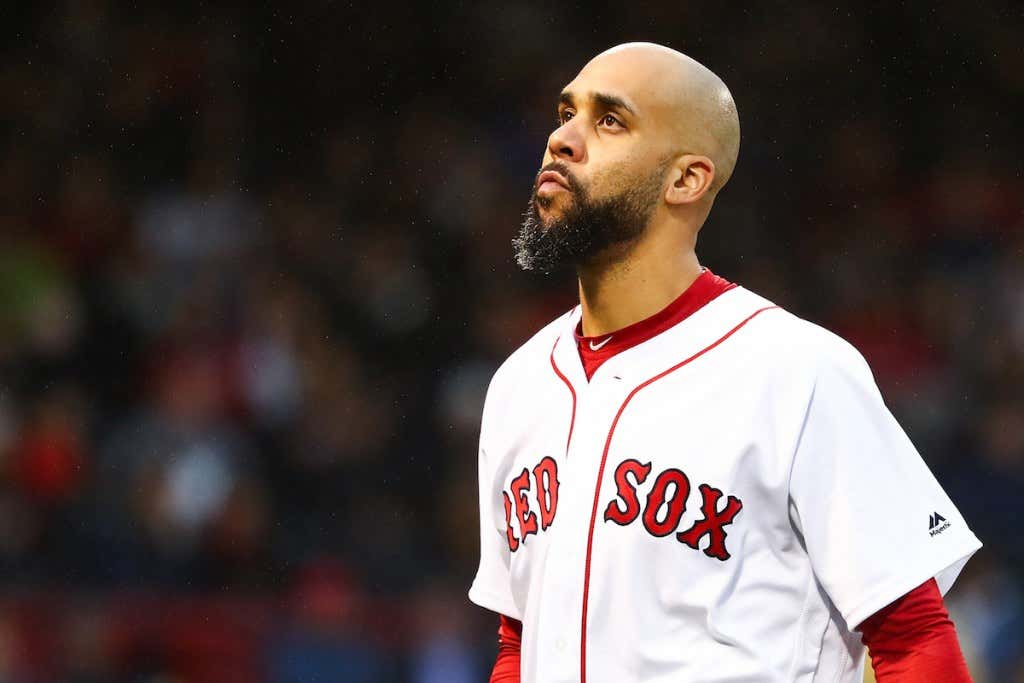 This is the dumbest shit ever that we’re still doing this, but here we go again.

This all stems from a Chad Finn piece in the Globe about Dennis Eckersley’s life and career, which was a really great read. In it, Eck reflects on the incident that occurred between he and Price back in 2017.

It was an ambush, tactless and calculated, and it still bothers Eckersley. “I didn’t know how to deal with that. I don’t plan on saying a word to him, I don’t plan on seeing him, never. [Broadcasters now board the plane before players.] I don’t really give a [expletive] one way or another. I don’t think he really cares one way or the other.”

This part of the article was clipped from the Finn story and blogged on WEEI.com by Alex Reimer, which drew a response from Price himself on Twitter.

I’ll be honest, I had a feeling this was going to happen. Maybe not an instant Twitter response from Price, but I figured he’d be asked about it, answer emotionally and then off we go again.

Not so much anymore, but back when Price first came to Boston, I was often accused of being a Price ball-washer. Fair. I would make any and every statistical case to paint him in a good light from a baseball standpoint, but that ball-washer label sort of went away after the Price-Eckersley incident in 2017. Price is still my guy. I love Eck. But I did not hide whose side I was on when this went down. Spoiler: It wasn’t Price’s.

This was my closing paragraph in the blog:

Oh, and one last thing. Price owes Eckersley an apology. And not one of those bullshit, PR firm-crafted, fake ass, carefully-worded to save face in the court of public opinion apologies, either. It needs to be a genuine apology to his face. Price owes him one, the Red Sox players who applauded owe him one, and to be honest, I think John Farrell owes him one, too. Those are your guys that did that, John. Accountability. You will apologize, and you. Will. Like it.

After a Twitter user responded to Price’s tweet today by saying that he should “man up and apologize” to Eck, Price revealed that he tried to.

When asked why this story was resurfacing two years later, Price offered the following answer.

As much as I hated seeing this story pop up again, I can’t agree with this explanation. Eck had been pretty silent on the whole thing since it went down. But when you’re being interviewed for a piece about your life and your career — the ups and the downs — this was a pretty big downer of a moment that people in Boston are still curious about. Eck was simply explaining how he felt about it after he was prompted to speak on it. That’s not attention-seeking to me.

When Alex Cora saw Price’s tweets, he had a private conversation with the lefty. After that happened, Price requested a meeting with the media, which was probably a better idea than fielding questions from random people on Twitter.

“Honestly, I just think it’s trash,” Price said. “He had an unbelievable career, 25 seasons. He’s a Hall of Famer. I saw his special on MLB Network. It was cool…”

“He wants to move on, but he continues to go on the radio or do interviews about it,” Price said. “If you want to move on, move on. We’re two grown men. We can meet. Ain’t nothing going to happen. I yelled at you. I’m sure everybody in here’s been yelled at.”

I read the quotes first and felt one way, and then I felt a different way after seeing the video.

For the record, Eck did have teammates and coaches in his MLB Network documentary so I’m not sure where Price was going with that or how it applies to the quotes from the Finn profile. He should’ve kept that one to himself, as it felt like an unnecessary cheap shot to me that wasn’t even based in fact.

I think it’s pretty clear, after seeing the video, that Price regrets the way that things went down two years ago. I also think Price is irritated that it was brought up again after he A.) tried to apologize to Eck and Eck wouldn’t let him, according to Price, B.) had finally built up good will with the fans and media following a World Series title in 2018, and C.) I do think that there’s a new layer of irritation towards Eck after the Hall of Famer went at Marcus Stroman earlier this year, who is a friend of Price’s from their time in Toronto.

All that being said, the best course of action from Price would’ve been no response at all. He ignores this and it’s a non-story here in 2019. The Eck piece in the Globe was great even without the Price quotes. It happened. Price was in the wrong. He admitted that. People reacted to it, and then everybody moved on. It’s old news being reflected upon two years down the line in a profile piece. Now, Price has added new layers to the rift that just didn’t need to be there with the MLB Network special comments.

My gut instinct, even after all of this, is that these two will eventually reconcile some day. It might not be any time soon, but there’s a reason why Eck is one of the most beloved broadcasters in baseball, and there’s a reason why Price is one of the most respected teammates in the league. While we wait on that Kumbaya moment, get ready for more awkward tension when Price is on the mound and Eck is in the booth.