Even though I don’t think this website needs anymore talk about death, as a boxing fan I would be remiss if I didn’t at least mention the passing of a longtime pound-for-pound king and one of the greatest fighters of my generation.

Pernell “Sweet Pea” Whitaker was killed last night after being struck by a car while walking across a busy intersection in Virginia Beach.

For those unfamiliar with Pernell, his professional career spanned from 1984 to 2001, where he became a four-weight world champion.  He won the gold medal in the 1984 Olympics as a Lightweight, and after retiring, he was inducted into the International Boxing Hall of Fame in 2006.

With all due respect to Sweet Pea, the driver of the car last night was able to do what many of Whitaker’s opponents couldn’t, and that is, land a clean shot.  You see, Pernell was one of the greatest defensive fighters of all time.  A slippery southpaw who was able to move effortlessly in and out of the pocket.

People tend to think of Floyd Mayweather and his ability to roll seemingly off balance behind his own shoulders whenever we hear about great defensive performances, but Whitaker was one of the most frustrating men to ever step into a ring AND one of only seven fighters in CompuBox‘s 26-year history to land 500 or more punches in a fight.

In short, Pernell not only threw an inordinate amount of punches, but he also didn’t get hit by many.

This video is almost 4 minutes and somewhat grainy, but you’ll see what I mean…

He retired with a record 40-4-1-1, including 17 KOs, and he became a household name when he fought 19 bouts on the now-defunct HBO World Championship Boxing platform between 1990-1999.

My most vivid memory of Pernell in the ring was from March 12, 1993, when he beat the shit out of Mexican superhero Julio Cesar Chavez Sr. but was awarded a controversial DRAW.

Chavez was the reigning junior welterweight titlist at the time and moved up in weight to challenge Whitaker for his welterweight belt before 65,000 at the Alamodome in a showdown for pound-for-pound supremacy.  One judge scored the fight 115-113 for Whitaker, but two others scored it 115-115, resulting in a majority draw that remains arguably the most controversial decision in boxing history.

Looking back at the CompuBox numbers from that fight (I fucking love CompuBox), Whitaker outlanded Julio 311-220 in total punches and he also landed 46% of his power punches thrown that night.  Pernell landed 50 punches in Round 8 alone versus Chavez, the 2nd most ever by a Chavez opponent… Which doesn’t seem like a big deal except for the fact Julio Cesar Chavez Sr. fought in 115 professional fights.

The post-fight report by William Nack was the cover story in Sports Illustrated.  The headline simply read… 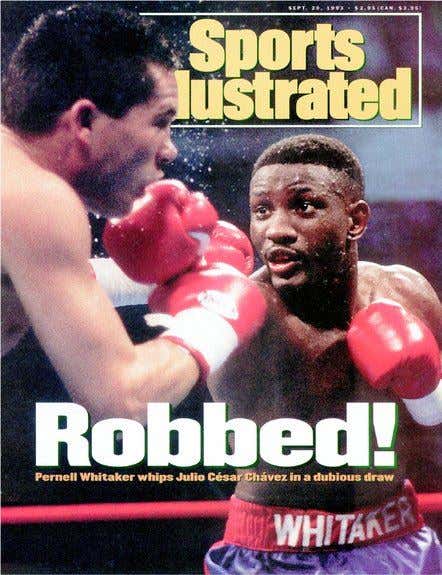 If there’s one thing I’d like to forget about Pernell is he also REALLY loved the smell of cocaine, surviving an overdose in March of 2002 and then being convicted of possession 3 months later.

In 2014 he was back in the news when he was forced to evict his own 73-year-old mother from the home she had occupied for 30 years because he could no longer afford to maintain it after squandering his millions on the aforementioned drugs and legal expenses.

So was Pernell a good son?… Arguably not.

Was he a role model?… Nope!

But he was an excellent fighter and one who will be sorely missed.

Condolences to the Whitaker family, and rest in Sweet Peace, Pernell.

I probably shouldn’t use the occasion of a legend’s passing as an excuse to pump Rough N Rowdy,  but I will be in Fayetteville calling the action from ringside, so maybe tune in.  It’s $20 to PPV or it’s included in BarstoolGOLD…