One of the most exciting times on the calendar for true diehard fans of the Chicago Blackhawks. A time when you can watch shitty 15 second clips filmed with an iphone of various teenagers doing simple drills and convince yourself that the future of the organization is bright. It’s wonderful. Nothing better than hope and promise and nothing delivers that quite like Prospect Camp. This year, unlike others in recent years, will have a TON of attention because the Blackhawks are seemingly more focused on being a Cup contender in like 2022 than 2020 and in order to do that, many of the faces this week at prospect camp will need to be impact players. With that said here are the most important things that could come from the week

1) Kirby Dach Is A DOMINANT Player In Camp

I want to see this GIF roughly 50 times this week.

This is my official Kirby-Dach-Is-Shit-Pumping-Everyone gif. When you draft someone #3 overall it is often expected that he can contribute right away. Kirby Dach is 6’4 and around 200lbs, which should make him one of the most physically mature and biggest players in the camp. This is a group of his peers. If he is as good as Stan and Co believe him to be, then you want to see him dominate his peer group. Dach instantly became the Blackhawks highest rated prospect when drafted and you’d want him to look like it this week. If he’s not, well it’s NOT the end of the world because it’s one week in July in 2019 and development arcs are different for everyone, but in terms of optimism and PR and maybe just maybe a guy who can come in and help THIS team right away…the first step is today over at 5th/3rd Ice Arena.

I feel like I am the only one on the internet who was actually okay with the Nylander-Jokiharju trade. To me, it’s a worth while gamble given the fact that the Hawks have limited spots now and in the future with Boqvist, Beaudin, Mitchell, Gilbert, Krys, Vlasic, etc in the mix. The forward pipeline had dried up so adding a recent top 10 pick to the mix seems pretty logical, even if there is risk involved. Having said all of that, there are a ton of questions about Nylander and his work ethic. Soon after the trade it was announced that he was added to the prospect camp roster. It is EXTREMELY rare for a player with NHL games under his belt to participate in this camp. It would be nice to Dach to dominate, Alex Nylander NEEDS to dominate. That is the standard for him. He needs to be the best forward in the camp every single day. If he’s not or if he’s caught dogging it at times that would be an indication that maybe some of those warts attached to his name are very real. Only one chance to make a good first impression. 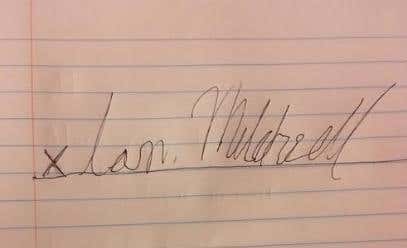 Full disclosure, I never learned how to write in cursive. My family moved between 3rd and 4th grades. My old school didn’t learn it until 4th grade, when I showed up to the new school everything was already in cursive and I cried when I got home because I couldn’t read and my mom called the teacher.

Anyways, I want to see Ian Mitchell’s signature on a contract by the end of the week. I think a big part of his reasoning for going back to Denver was the opportunity to further his development by playing in every situation. Toughest matchups 5 on 5, top PP, top PK, all of it. It wasn’t hard to look at the depth chart and wonder if those same chances would be there in Rockford. Now, some of those hurdles have been removed with the Jokiharju trade. I have always been of the opinion that Mitchell will end up being the most complete defender of this group of defensive prospects. It’s probably why I am more okay with the Jokiharju trade to begin with. Mitchell>Jokiharju.

Mitchell is a high character kid. He might have some integrity issues with telling Coach Carle that he’s not going back to Denver so late in the cycle, but the Blackhawks should offer him everything in order to make him sign. Max schedule A bonus, max schedule B bonus, full ELC boat, whatever it takes. He can live in my second bedroom if wants. I’m only 1.5 miles or so from the United Center.

Everyone knows what Adam Boqvist can do with the puck on his stick and with his feet. Elite with both of those skills. I am not saying I want him to be fat and eating cookies like he is in this video, but if he is going to be a top 4 NHL defender he needs to get strong so he can battle better in front of the net and along boards. This is his second go ’round for him in prospect camp. He flashed big time last year. I went to the scrimmage last season and Boqvist definitely stood out. This year he should be noticable every shift and every drill. Boqvist and Mitchell should be pushing each other to see who can get to the NHL first. That battle starts this week.

From my view there are two other guys I will be focused on this week.

I love everything about this kid. He put up a ton of points, he is charismatic, he plays hard, he can play center or wing, and he runs his mouth. He sounds like Andrew Shaw 2.0. Every team in the NHL needs guys like him. Guys who can play any style. There have been questions about Barratt’s skating ability and if it’ll translate to the NHL level. Good way to gauge that is if he’s looking quick and strong against guys vying for the same role. I am hoping he can bring some edge and maybe an even a little more offense to a bottom 6 role than like…David Kampf for isntance.

Of all the prospects, Kurashev gets me the most tingly. Not saying he’s the best, but I LOVE a good boom or bust type of guy. He is a true lottery ticket. He’s so toolsy. He can absolutely fly on the ice. He has been a point per game player the last two years in the Q. He really really shined for Switzerland in the WJC and he was a good player in the World Championships this summer. The Blackhawks obviously love taking high speed high skill guys in the later rounds. It’s worked with Hinostroza, it’s worked with Sikura, and it might just work with Kurashev too. I am excited to see if he stands out in this setting as well going into his first year of pro hockey with the Ice Hogs.

We are recording Redline Radio today, but I am going to show up to camp a few times. We’ll see if the Hawks brass are as nice to me this summer as they were last summer. My guess is no.