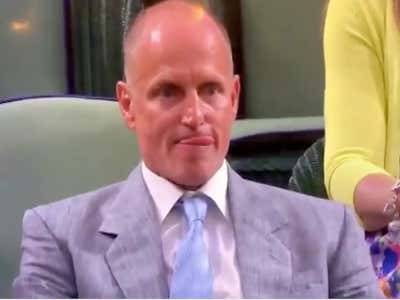 No offense to Novak Djokovic, Roger Federer, Simona Haelp, or whatever member of the royal family the Brits are talking about today. But the lasting legacy of the 2019 Wimbledon Championship will be an American named Woody stealing the show from a bunch of Europeans holding rackets using nothing but some booze and facial expressions. General George Washington must have been flashing those brown woodies from up in heaven watching everything go down at Centre Court.

It all started with the Wimbledon security guard telling Woody he couldn’t go back to his fancy seats at the moment, which led to a little bit of American ingenuity to pass the time.

What did Woody do once he got the green light to go in his seat? Greet the security guard with a whole lotta swagger as well as a fresh ass hat, which may be the most disrespectful move an American has pulled on a Brit while holding a drink since the a bunch of tea was tossed into the Boston Harbor almost 250 years ago.

Once Woody was back in his seat, the cameras caught him appearing to enjoy the finer things in life that all American enjoy, like the drunken sway while on a cell phone:

The edibles kicking in:

Again, Simona Halep made quick work of Serena Williams and the Djokovic/Federer match was an instant classic that may just win the most prestigious award in all of sports (an ESPY!). But when the grass clippings settle, history will remember this year’s Wimbledon tournament for the American pothead actor getting his drink on around the fancy folks and stealing the show just like his Hunger Games character did once upon a time. Woody Harrelson has played a Boston bartender, a disgraced bowling champion, an alcoholic detective, a mass murderer, a hustling basketball player, and a U.S. President. But what he did during a tennis tournament in England this weekend was somehow by far his most American performance yet.

Now raise your glasses to the true winner of Wimbledon: