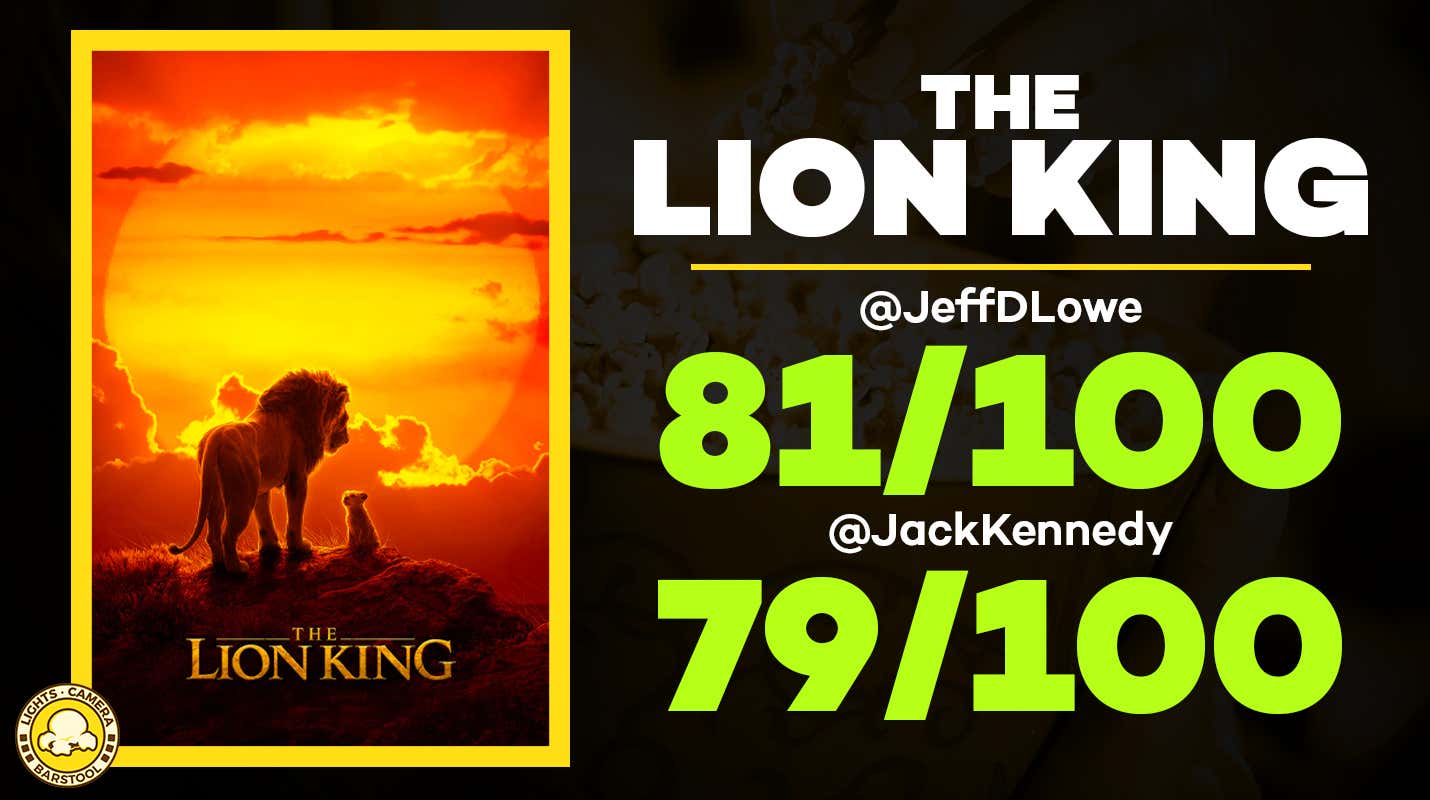 The wait is over. ‘The Lion King’ release is upon us. We saw it and we have some thoughts…

Jeff (81/100): Driven by stunning, Oscar-worthy visual effects, ‘The Lion King’ delivers on the desired nostalgia but is missing much of the emotion and soul of the original movie. The animals and environments look breathtaking, but realism comes with the sacrifice of the liveliness of their cartoon counterparts.

Being a near shot-for-shot remake of a movie that is widely considered to be nearly perfect means that the end product is still pretty damn good. It was hard to not smile and feel captivated by ‘The Lion King’ all over again. The music is still fantastic and I truly can’t harp on the visual effects and cinematography enough. It’s both mind-blowing and ground-breaking work that paves the way for the limits of visual effects in movies to pushed farther than ever before. (Spend the money to see this movie in IMAX)

The voice cast has been the biggest part of the marketing for this movie since it was announced and it did not disappoint. Everyone from James Earl Jones to Donald Glover, JD McCrary (young Simba), Beyoncé, John Oliver and more had incredibly satisfying performances. The show was completely stolen by two people, though: Billy Eichner and Seth Rogen. For me, Timon and Pumbaa’s presence lifts the movie up above many of its issues. The chemistry and dialogue between the two is laugh out loud funny and they supply much of the movie’s spirit.

It all comes down to the emotion and personality of the “live-action” animals. The goal of photorealistic and life-like versions of the characters will end up being why many people are put off by this movie. There is so much you can do with a cartoon that you can’t do if you want to keep the animals as realistic as possible. Here’s an example:

Look, I don’t have as much of an issue with the new clip above as other people do, but the gripes are very much justified. There are also some scenes and moments that are either a bit different or just not there at all and it takes away from the heart that makes the original movie so good.

Any fan of the original movie will have, like with all of Disney’s live-action remakes, a major nostalgia trip. There are a few shots that are shocking to see on screen, that’s how fantastic the visual effects look. Even with its issues, I think it is the second best Disney remake just behind Jon Favreau’s other movie, ‘The Jungle Book’. This movie is going to make a shit load of money and Disney is going to keep making these remakes. With that said the debate of “is this necessary?” won’t be going away anytime soon.

KenJac (79/100): While a visual masterpiece, ‘The Lion King’ puts the “remake” in “live-action remake”. It’s an almost shot-for-shot reimagining that is guaranteed to keep you entertained but also may leave you feeling like something is missing.

This new cast is something that has excited us and the general public for a while now. For the most part, they all deliver. However, Billy Eichner is the one standout performance to me. He stole the show with his rendition of Timonn, and I felt like both him and Seth Rogen (Pumbaa) were able to give a sense of individuality to their performance (their characters were likely given the most leeway in the scripting process) that distinguishes their rendition of the characters from the original. I didn’t feel like Donald Glover or Beyonce were given the chance to lend Simba and Nala their own individual flair, which was a bit of a disappointment.

From a visual standpoint, this felt like a bleeding edge experience. In our last episode of LCB, I recalled how people freaked out about the detail put into ‘Incredibles 2’.

You get that experience for every single frame in this movie. It’s incredible and it really takes your breath away. The songs were great as well, and I found Glover and Beyonce’s rendition of ‘Can You Feel The Love Tonight’ particularly great. I think my biggest issue with the film is that there wasn’t a real sense of individuality to it outside Timon/Pumbaa and the Hyenas (played by Eric Andre and Keegan Michael Key). It’s more a pure remake which sort of takes away part of the magic of it all. Also, while I appreciate the relatively brief length of the movie, I don’t feel like we got enough time for the big stars to leave an impression. Glover felt as if he barely got 500 words out in the entire movie, with Beyonce getting even less. No disrespect to JD McCrary and Shahadi Wright Joseph, who play young Simba and Nala and do a fantastic job, but I want more out of the two generationally great artists attached to the cast.

I would say it’s worth seeing in theaters from both an artistic and nostalgic standpoint, but I really do feel like something is missing. It’s definitely funny and I wouldn’t call it soulless, but I just wanted and expected more.

—
We will wait for a few weeks to find out if ‘The Lion King’ is Officially Buttered or not. Tune in to this week’s Lights, Camera, Barstool where we did a full spoiler review of ‘Spider-Man: Far From Home’.