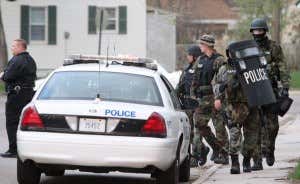 What an absolutely bananas, off the walls headline and story. And no this is not clickbait. This is 1000% the real thing. A 9-year-old who lives in Nebraska legitimately stole two separate cars in the span of three days and lived to tell the tale. As a matter off fact he’s walking free as I write this because HE IS TOO YOUNG TO BE IN POLICE CUSTODY. The Nebraska juvenile court only has jurisdiction over kids 11 and younger! This kid can literally go out on a crime spree for the next two years without any sort of consequence. Unbelievable. Below is the story from the first grand theft auto incident.

SOURCE – A 9-year-old boy stole a stranger’s car Sunday night, crashed it into a front porch about 2 miles away, then spat on a Grand Island police officer and spewed racial slurs at him, police said.

The boy, who is not being identified by authorities because he is a juvenile, was given a ticket and released to his parents. The Nebraska juvenile court system has jurisdiction only over children age 11 and older, according to state law.

Grand Island Police Capt. Jim Duering said Monday that in his 22 years with the department, he has not seen someone so young “with this level of hostility and seriousness of offenses.”

Duering said the series of events started about 10:30 p.m. Sunday when police responded to a call about suspicious activity — the boy riding his bike in the middle of the street. Officers told him to stop, but the boy sped off on his bike.

Officers followed the boy but lost sight of him. One officer found an abandoned bike near 10th and Eddy Streets, where a resident told the officer that the boy had stolen his 2007 Honda Civic. The car was unlocked and had the keys inside.

Authorities spotted the car, which Duering said wasn’t going very fast, and tried to safely corral it. But the boy crashed the car into the front porch of a home near Ashton Avenue and Oak Street — about 2 miles from where he had abandoned the bike.

The boy then locked himself inside the car. Officers had to break a window to get him out.

“It went downhill from there,” Duering said.

The boy was not cooperative and began to yell racial slurs at a Hispanic officer. The boy, who is white, also spat on the same officer, Duering said.

Officers found a folding knife in the boy’s possession. They took him to a juvenile holding room, but probation officers said they couldn’t get involved with a juvenile younger than 11, Duering said. The boy was released to his parents, who live in Grand Island.

We’re not just talking about your run of the mill trouble making 9-year-old here folks. We are talking about the most savage 9-year-old in the history of mankind. He steals a cop car, crashes it into someone else front porch and then spits on and curses out the cop that responds to the incident and yells racial slurs on him. Who hurt this little boy? My lord I don’t even think I knew what racial slurs were when I was nine and this kid is yelling them at police officers?! Where are his parents?! I love the last sentence of the article is “Hopefully, we can get some services introduced and get this young man back on the right road.” LML YOU THOUGHT BITCH! Below is an article detailing the second incident of grand theft auto from a boy so young his name can’t even be released to the public.

SOURCE – The 9-year-old Grand Island boy who crashed a stolen car into a porch and spat on an officer Sunday is accused of stealing another vehicle Tuesday night, authorities said.

Grand Island Police Capt. Jim Duering said officers were worried about a repeat crime spree when they returned the boy to his home Sunday. According to Nebraska law, juvenile court has jurisdiction only over kids as young as 11 years old.

“We were hoping it wouldn’t happen again,” Duering said. “The chances of us having two 9-year-old suspects is zero percent.”

Duering said officials had tried to get social services to the boy and his family earlier this week. Now, with a second offense against the boy, many agencies are reaching out to offer help, he said.

Randy See, the director of Hall County Juvenile Services, provides diversion for juvenile first offenders who are accused of low-level crimes. But the Hall County Attorney’s Office refers kids to juvenile services, and See understood that a juvenile criminal case can’t be filed against youths younger than 11, because of the state statute.

An option may be for Child Protective Services or the Department of Health and Human Services to get involved, See said, speaking in generalities and not about the specific case.

“Are the needs of the child above the capabilities of the family to provide protection and safety?” See said. “If that’s the case, then they could look at alternative placement.”

The Department of Health and Human Services did not immediately respond to questions about what the agency would do in a situation with a too-young juvenile accused of serious crimes.

Duering said that the parents have been cooperative and that there were no red flags pointing to criminally negligent or liable behavior.

This is amazing. It sounds like a crazy parody skit it’s so god damn funny. There are some quotes legendary quotes in this article. “We were hoping it wouldn’t happen again.” Yes I would imagine you were hoping a 9-year-old would not steal a car, crash it into a porch and then spit on a police officer.

“The chances of us having two 9-year-old suspects is zero percent.” GREAT POLICE WORK HERE! I also would find it hard to believe that some random town in bumbledick Nebraska would have two different car stealing, cop spitting 9-year-olds.

“Duering said that the parents have been cooperative and that there were no red flags pointing to criminally negligent or liable behavior.” Bitch you better find a god damn red flag! I’m not saying you have to completely fuck them but at least bring up some question with their parenting. I don’t have kids and I wouldn’t want my parents to be totally responsible for every bad thing I’ve done in my life but stealing two cars in a three day span is cause for someone to be the full guy in this situation and apparently the kid is too young to take the blame.

Some may go as far as saying this kid is a criminal mastermind. He has absolutely no risk and all of the reward. The return on investment on these endeavors is through the roof. He literally can’t lose. After stealing two cars in three days at the age of 9 I think he has to be cemented as the most badass little kid of all-time, officially surpassing the “I just wanted to do hood rat stuff with my friends kid.”