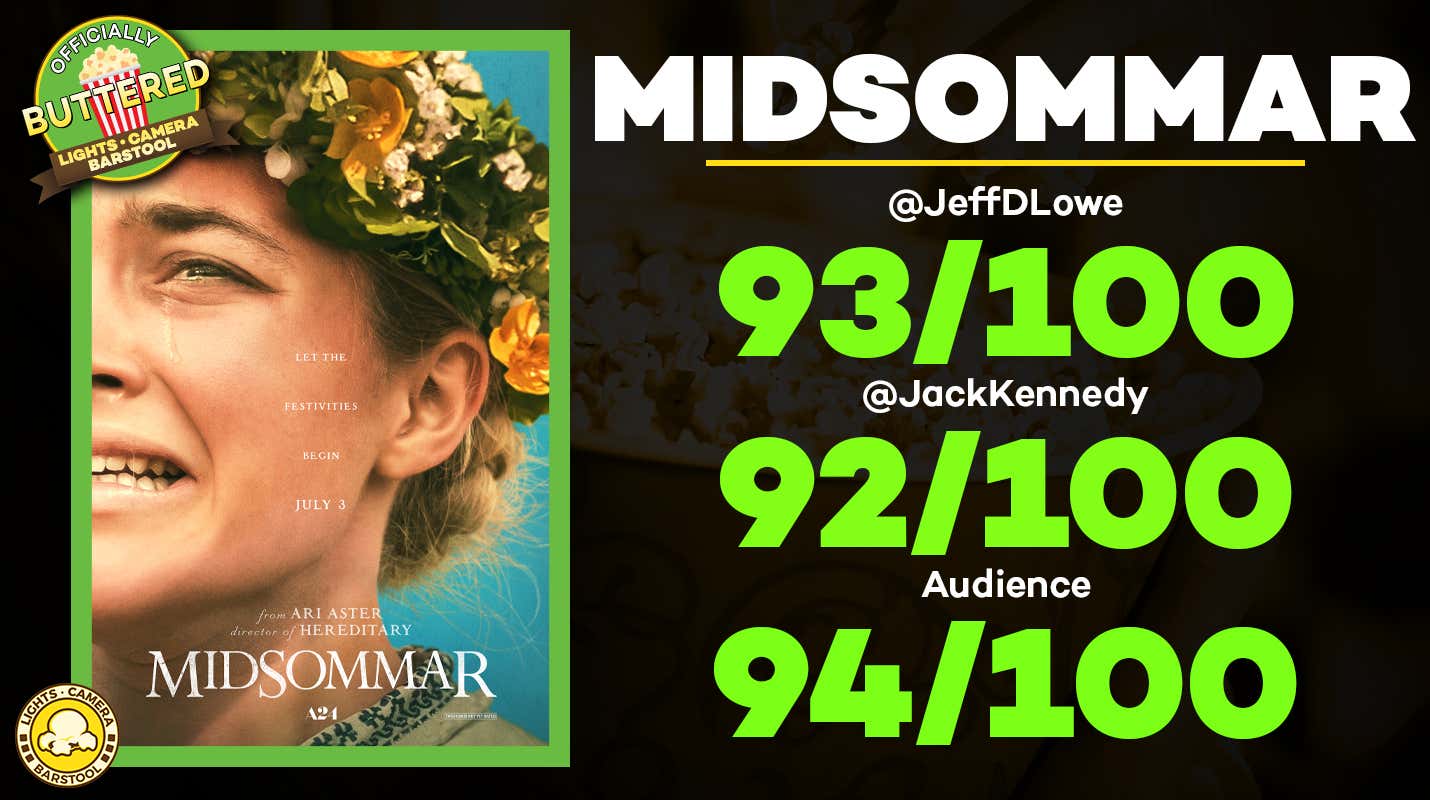 SYNOPSIS FOR CONTEXT: With their relationship in trouble, a young American couple travel to a fabled Swedish midsummer festival where a seemingly pastoral paradise transforms into a sinister, dread-soaked nightmare as the locals reveal their terrifying agenda. (via Google)

Jeff (93/100): Ari Aster’s ‘Midsommar’ is a triumph in tension and horror with stunning visuals as good as anything we’ve ever seen from the genre. The unique, unusual horror setting lends to the shock and awe amidst a gripping story packed with intense symbolism.

Everything about ‘Midsommar’ just feels “different,” and in the best, most memorable, way possible. The daylight setting of the movie sticks out the most as the bright tone delivers such an effectively sharp contrast to the horror you see unfold. There are countless breathtaking shots and scenes in ‘Midsommar’. A horror movie set in a green, flowery Sweden? Brilliant. For years we’ve been trained to associate horror movies with darkness, but Ari Aster turns the genre on its head by using environments that might normally give audiences a sense of comfort and peacefulness.

It’s a nearly flawlessly executed slow burn that will draw you in and keep you guessing, before delivering blow-after-blow of terror. Aster layers each scene with foreshadowing and hints at what is about to unfold with the story. The suspense builds even further with an eerie score from The Haxan Cloak that plays off the “bright” feeling of the movie. Too often, as I say repeatedly, we are given horror movies with a backbone of telegraphed jump scares and a complete lack of intelligence.

The cast is outstanding, especially Florence Pugh in the lead role as Dani (she was also in this year’s ‘Fighting with My Family’, a surprisingly solid movie from this year). All of them succeed in carrying out their roles within this complex story, with the “comedic” burden executed nicely from Will Poulter. I did pick a weird time to start ‘The Good Place’ since ‘Midsommar’ stars one of that show’s actors in William Jackson Harper (Chidi), but that’s neither here nor there.

This movie is not for the faint of heart, that’s for sure. Regardless of how you receive it, you’re sure to have a few “what the fuck!?” reactions from start to finish. What Ari Aster did was create a bold, daring and fresh movie that moves the needle. Will audiences like ‘Midsommar’ more or less than his previous movie, ‘Hereditary’? It’s hard to say, for me, I prefer this one a bit more, but it’s clear his movies are works of art and already appointment viewing.

A “breakup story” drawing inspiration off an event from his own life, Ari Aster’s ‘Midsommar’ deserves all the praise it is receiving. In a Hollywood packed with reboots and tentpole franchises (of which I love, let me be clear), something this original, ambitious and out there needs to receive as much attention as possible, especially when factoring in that it is brilliantly made.

KenJac (92/100): Ari Aster proved yet again that he is one of the most talented up-and-coming filmmakers with the grueling masterpiece that is ‘Midsommar’. Fans of his previous movie, ‘Hereditary’, know from experience that he is a maverick in the horror genre, and he took a lot of what made that movie great and expanded on it with this film. There is an incredibly unique and authentic feel to the production value, beautiful landscape shots, and some very impressive long-takes. All of these factors, along with the fantastic performance from the cast, make ‘Midsommar’ the most well-made movie of the year in my opinion.

Florence Pugh is the star here as the grief-stricken Dani, a character who goes through an insane emotional journey throughout the course of the movie. Pugh does a fantastic job going through this arc which is very dependant on her ability to deliver in big moments. Also, as I mentioned before, there is a lot of long-takes in this movie and almost all of them feature her. To be able to go through a 6-minute cut where you’re screaming, crying, etc., is really challenging and I can’t applaud her enough for that. The other big names for this were Jack Reynor, William Jackson Harper and Will Poulter. They played their roles well (Harper literally played his character Chidi from ‘The Good Place’ which kind of took me out of it), but none of them really had the load that Pugh had to carry. I will say that the Sweedish cast did an excellent job of being generally creepy as all fuck.

From a technical standpoint, this was a complete and total masterpiece with a few exceptions. Aster and cinematographer Pawel Pogorzelski did a fantastic job of delivering bright, disarming colors that were juxtaposed with dark, surreal events unfolding during the plot. It’s a long take fan’s dream, and there use a lot of wide-screen shots that have a minute, yet noticeable, things going on in the background that you don’t know what to focus on. All of this aids in the extremely unsettling tone of the film. You’ll be grossed out, your anxiety will spike, and the grueling pace will have you thrown off your center, leaving you feeling naked to whatever gets thrown at you next. The only thing that I dock points on it for is that said grueling pace, while perfect in a lot of moments, was a bit much. I definitely hit a point in the movie where I was wondering when it would wrap.

A lot of people go into this movie looking to compare it to ‘Hereditary’, and the films are definitely similar in a lot of ways. However, ‘Midsommar’ is a more grounded suspense film where ‘Hereditary’ was definitely more supernatural horror. If you like horror, suspense, operatic-feel drama, or simply good filmmaking, this is the movie for you.

—
‘Midsommar’ is Officially Buttered even without Trillballins’ score, due to a high mark from the Audience. Tune in to this week’s Lights, Camera, Barstool where we will do a full spoiler review of ‘Spider-Man: Far From Home’ on Thursday.