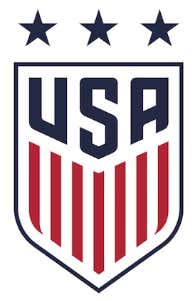 With the Frogeaters out of the way, the coast is now clear for Team America (the good one) to cruise to back-to-back WWC titles… this is especially true now that Germany took a dive against piddly ass Sweden after realizing the World War II (the remix)-type pain they were in for had they made it to the final against USWNT.

That means Alex Morgan, Lindsey Horan & Co. have two perfunctory boxes left to check before lifting the cup once again:

If FIFA had any scruples they would just hand us the trophy now and get it over with… buttttttttttttttt obviously FOX has sold a lot of ads that they need to run, etc, etc, so the matches will go ahead as scheduled.

Quick reminder of how the bracket has shaken out so far: 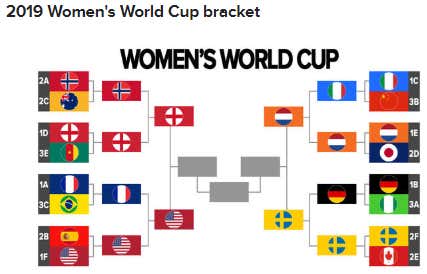 Sweden sucks. Only reason that result makes any sense is that Germany, as I said, wanted no part of the US. Gotta kinda respect their brutal pragmatism. Netherlands is a bit of an upstart and will like beat Yellow Norway, so they will probably make their way out of the consolation bracket.

As for the championship bracket….

So what can we expect from the bloody Brits?

They are a good team but don’t have true difference-makers like the US. Ellen White is there most dangerous player up top but I haven’t seen anything to suggest that the combination of Sauerbrunn and Dahlkemper can’t mark her out of the game. If there is a potential trouble spot it is through Lucy Bronze and Nikita Parris – two speedsters who push up on the wings and could exploit space behind if Crystal Dunn and Kelly O’Hara get pulled too far up themselves. Jill Scott (aka Lady Crouch) and Fran Kirby are both solid players in the middle of the field, but solid isn’t going to get the job done against the midfielders the US can throw out there.

So what can we expect from USA? 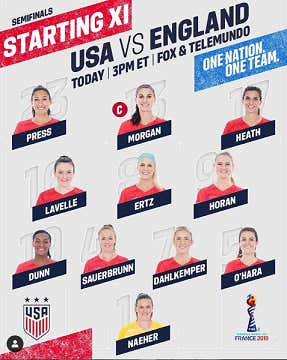 I have criticized the coach on several occasions for some of her lines-ups and questionable substitutions (and/or lack thereof) but I think she got this one absolutely right – provided the birthday girl is healthy.

Our midfield stacks up extremely well against Enguhlund’s, and that should prove to be the big difference in the game. Provided no more silly mistakes from GK Naeher and the CBs, and Crystal Dunn plays anywhere close to as well as she did against France, this should be a shutout.

NOTE: Some people are probably going to be up in arms about Rapinoe not starting since she has scored the teams last four goals that have basically carried the team through the last two rounds. I don’t mind it at all. She has been deadly in front of net but not at all great other than that. I love the combination of a well-rested Press, a motivated Heath (after an off game vs France) and our queen the bday girls running rampant today.

This is a BIG step up in class for Enguhlund. I don’t think they are ready for it.

USMNT vs Jamaica tomorrow. The summer of soccer continues…