As you all know I have the best bingo call in all of America so last night I wanted to show that off. My Grandma always talked about this Bingo game that was played on Monday nights under the church and without football I needed some gambling juices flowing. The experience I had is very hard to even explain because the environment is tense as fuck and I may need to do a video on this as well to het the full experience.

It started right away when I walked in with some people and every single person looked at us like we were in the wrong place. I heard a bunch of ladies saying look at these new comers I guess school is out. It was like I was walking in on a cult the way they were scoffing at me and I knew I was in for a battle. Listen I didn’t expect to walk in this place and take all of these old bags money because this is a regular thing for them. Now I am one of the best bingo players you’ll ever see play but thats besides the point. Throughout my time I had a lot of thought so hear me out.

First of all there were 20 fucking rules and I am still in shock you need to be liscensed to be giving out bingo Cards. 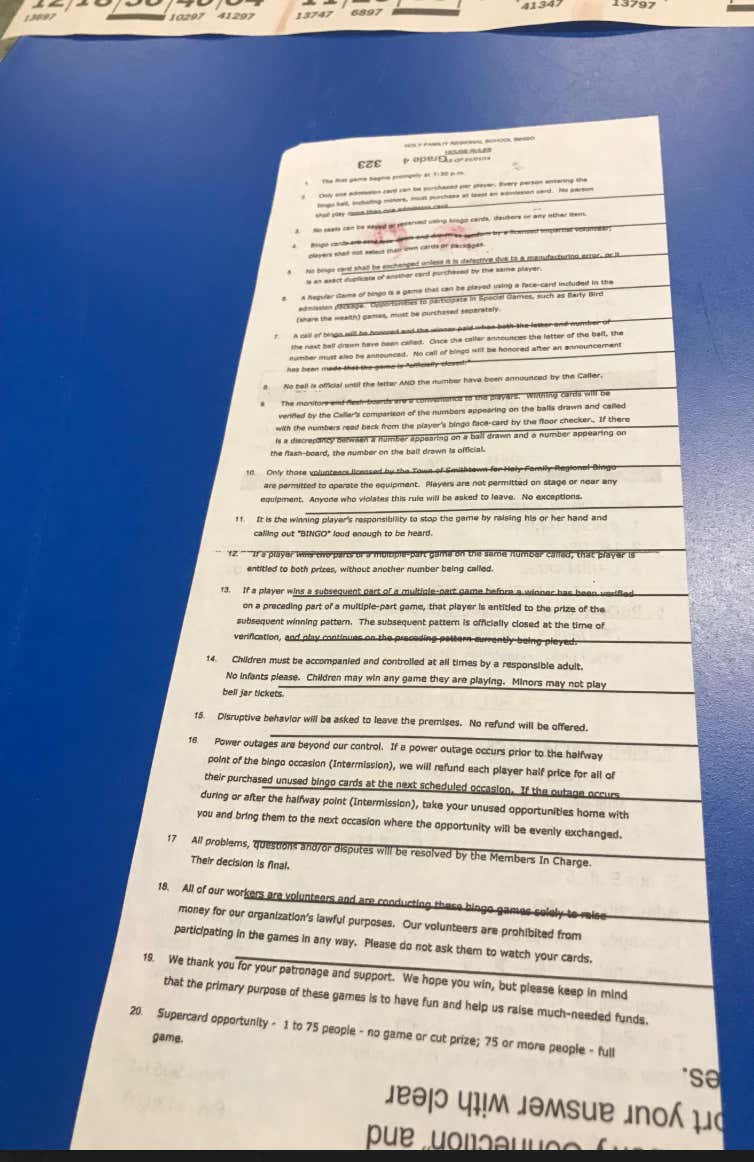 So you get the point, this is some serious shit. I knew it was serious when none of the bingo players could even take the stairs down and all waited for the elevator because they were so old. During the game the guy who calls out the ball numbers was getting attacked. He would either try and make a joke or if he fumbled the ball these ladies would just be screaming, Come on next ball!! WHAT IS TAKING SO LONG. Obviously I would egg them on and say I mean this bastard can’t just shut up and put the ball on the screen. Were not here to talk we are here to win some cash.

The biggest thing I couldn’t get over is that we were in the bottom of the Church. There was one suck bag there who sneezed 47 time throughout but the amount of god bless you she got had to be a record. Like usually after the 3rd sneeze you stop but they kept it up the entire game.  It was very hard to concentrate throughout because it isn’t just regular bingo where you have 5 in a row. There are certain games and you have to be very aware of what is going on and the rules. There was one lady where I thought they were going to take out her legs because she prematurely called bingo. People went bizerk and I was almost happy to never come lose to bingo because I was scared to even maybe have it.

So lastly my favorite part of the entire night was the old lady gossip. They wouldn’t sit next to each other and they also can’t hear shit so they would have to yell to each other. I almost shit myself when they started saying these things. “Hey Sally, make sure you tell everyone Marg said hi because she wants everyone to know shes not dead.” My goodness what a line. Then right away the answer back was ” Okay good but did you hear about Tracey getting divorced?” Can you imagine getting divorced at age 70, that just seems to exhausting. There is nothing better than gossip though and to end the night off right was perfect. The last game was full card bingo for a $700 and once this lady yelled BINGOOO, everyone packed there shit up immediately and talking shit to eac other just saying “you believe she won again.” I may have to go back and do a fraud and Order on this to get to the bottom of it. What a fucking evening though and I for sure will have to be back. Please bring football back because I don’t know what to do with myself.