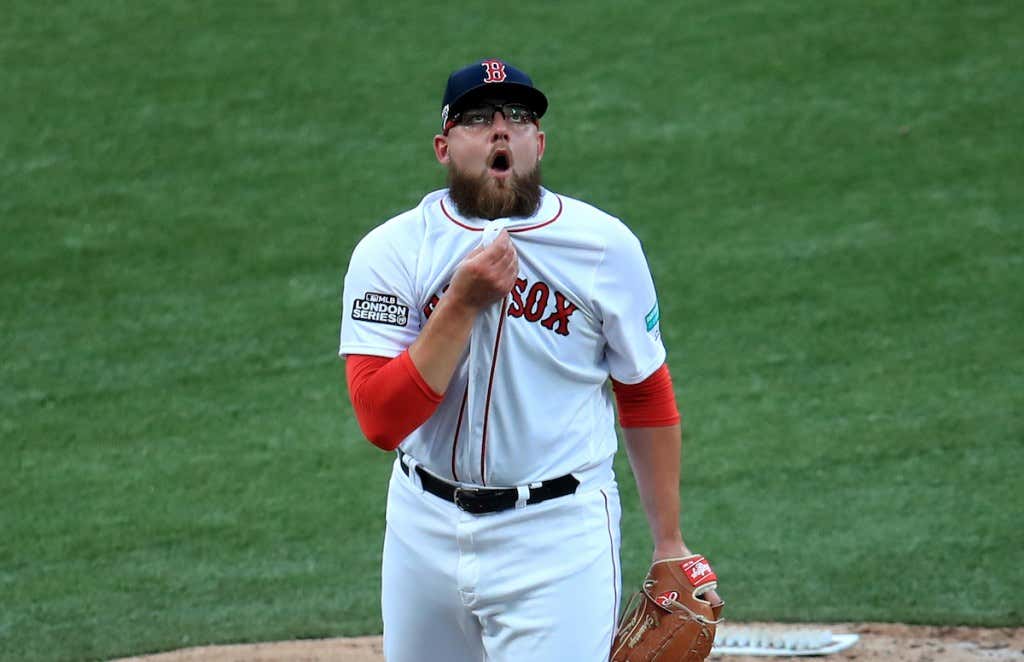 What the fuck did I just watch?

The Red Sox and Yankees hopped on some flying hotels that cost $500,000 each just to get there and set to do battle in London for a historic series between two historic franchises. The Red Sox sent Rick Porcello to the mound, while the Yankees countered with Masahiro Tanaka. Neither starter made it out of the first inning. It was bizarro world baseball. After the first inning, which took an hour to complete, the game was tied at six. SIX! That was thanks to Michael Chavis launching a three-run bomb in the first.

Porcello only got one out, giving up three RBI doubles and a homer to Aaron Hicks. Tanaka recorded two outs, giving up an RBI double to Rafael Devers and the three-run dinger to Chavis. With the ballpark dimensions what they were (the shortest centerfield in the league), you expected some runs to be scored between these two lineups. They combined to score THIRTY runs before a winner would be decided.

After Porcello got the hook, failing to make it out of the first inning, rookie Mike Shawaryn got touched up for EIGHT fucking runs. Steven Wright ended up getting stuck with the loss, allowing two earned runs in two innings. Meanwhile, the Red Sox had Porcello and Shawaryn combine to give up 14 runs in an inning and two thirds. What a shit show.

At one point in this game, the Red Sox were down 6-0 and immediately tied it the first chance that they got. After Shawaryn got shelled, the Red Sox faced a deficit of 17 to friggin’ 6. Somehow, by the grace of God, they still brought the tying run to the plate later in the game. Jackie Bradley Jr. homered, Chavis launched his second three-run shot of the game, and the Red Sox kept chipping away until it was 17-13, leaving the bases loaded with the tying run at the plate in the bottom of the seventh.

I wanted to say “that was the game right there,” but you could point to a number of player performances and situations in that game that the Red Sox could’ve pulled out a victory in this one, but it just didn’t happen. It was entertaining as hell, seeing all those runs being scored and the drama of the comebacks, but man was that sloppy. The fans certainly got their money’s worth, though.

In the short term, I loved seeing the Red Sox battle back several times in this one. They could’ve rolled over and died when it was 6-0. They could’ve chalked it up as a loss when they were down 17-6. That didn’t happen. They fought back until the final out, and they straight up got beat by a lineup that is one of the most unforgiving collections of sluggers I’ve ever seen. Big picture, the Yankees are running away with the division. Of course, some Yankee fans are choosing to forget that winning the division isn’t the only entrance into the postseason. They should know that by now, being experts at sliding in via the Wild Card. But the division ain’t looking great here on June 29. Half a season left, but it’s not pretty.

All the Red Sox can do now is take it one day at a time. Win tomorrow. Win a series here and there. Play better baseball and then see where you end up. I’ve said it before, but until they do something to improve their bullpen, this is not a World Series contending team. They’re not. The goal isn’t to win the division. The goal isn’t to play in a Wild Card game. It’s to win the World Series. And right now, you’re not looking at a team that’s capable of doing that.