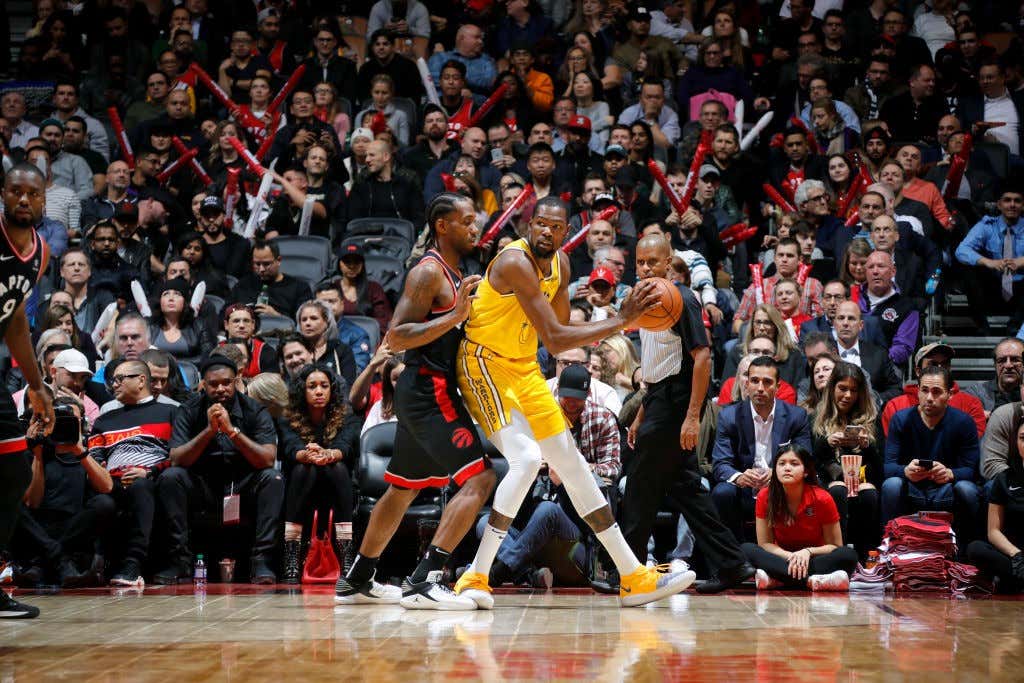 (ESPN) – Free-agent stars Kevin Durant and Kawhi Leonard have been discussing scenarios that could include a future with them playing together, league sources told ESPN.

For now, there are two clear possibilities for the two All-NBA forwards to sign into the same franchise — the LA Clippers and New York Knicks.

Durant and Leonard are planning to talk with each of those teams once free agency opens Sunday at 6 p.m. ET, league sources said.

Leonard and Durant are each planning discussions and meetings with several teams, but only Clippers and Knicks are in alignment with salary-cap space and common interest to sign both players. Brooklyn could conceivably house both, but a more likely scenario would be Durant and point guard Kyrie Irving signing as free agents with the Nets. Brooklyn is firmly Irving’s focus in free agency, league sources said.

We’re about 18-hours away from real news breaking, which means these next 18-hours are going to be borderline unbearable. Once actual signings start going down, the rumor mill will slow down slightly but will never relent until everyone has inked their new deals. Which is going to take a while since these two want a few free dinners before they make their next moves.

In terms of locks, right now only Kyrie and Klay Thompson feel like we know where they’re going (Brooklyn and nowhere, respectively.) Durant could sign with legitimately anyone and it would not surprise me. A full five year max with Golden State? I’d believe it. A three + one with the Knicks? Sure, I could 100% see that. That second max slot to pair up with Kyrie in Brooklyn? All of it makes sense.

Kawhi for a minute now has felt like a two horse race between Toronto and the other Los Angeles team. Now, the Lakers have emerged as a threat. A real threat, too, no matter how little credit I want to give them. That’s three teams that instantly become the favorite to win the 2020 NBA Championship. The Knicks would have Kawhi, RJ Barrett, Mitchell Robinson, Kevin Knox, and a bunch of cap space tied up to a guy who cannot  contribute no matter how hard he tried in this upcoming season. Not only that, he may never return to his former self. Granted, an 80% KD remains one of the more lethal scorers in the NBA. But after watching the Clippers take the healthy Warriors to task in the first round, how are they not the most intriguing option for these two to pair up? Kawhi, after this postseason run, holds the mantle of best player in the NBA. That’s no permanent title, but for now it is his. Wherever he goes that team is going to cook because of him and him alone. How far they go is reliant on the other 14 members of whichever roster he joins.

If he wants to link with another superstar, why not go to the Lakers – where their stars are healthy and able to play right now. Or, if he wants another shot to bring a franchise their first title without any help from another “star” why not sign with the Clippers? They can bring in Durant, tell him to chill for the year while allowing Kawhi the ability to contend in year one. Then, KD comes back year two and they attempt to repeat together. That feels like the winning ticket, not trusting the Knicks front office to make the necessary trades to fill out their roster in order to compliment Kawhi while biding time for Durant’s return.

There’s a lot of shit we’re about to be force-fed over these next 18 hours. Can’t wait!