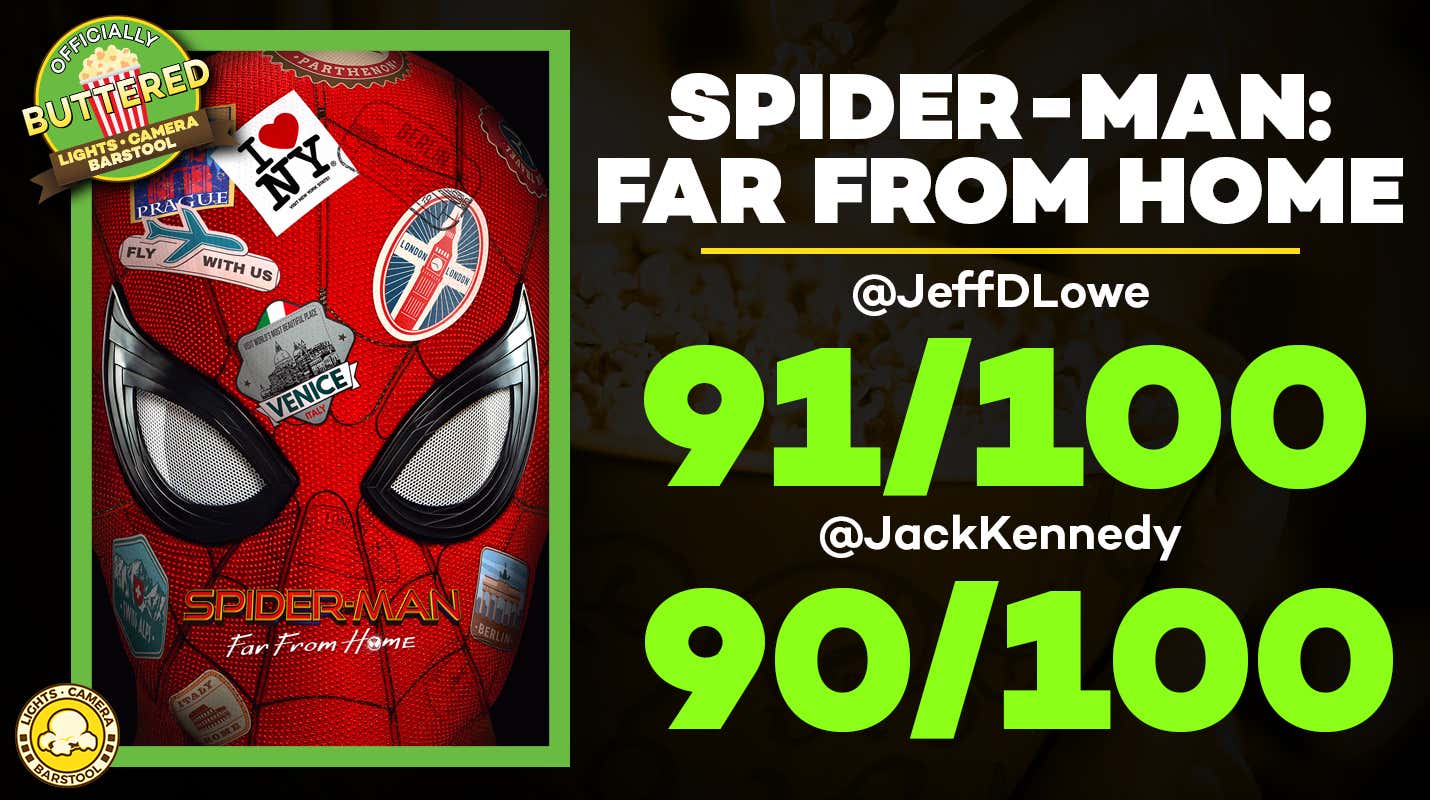 We saw ‘Spider-Man: Far From Home’ and we have thoughts…

Jeff (91/100): As a Marvel shill who gets paid by Kevin Feige, I need to state that ‘Spider-Man: Far From Home’ is an absolute blast! Following up ‘Avengers: Endgame’ is as tall of a task as it gets, but the new ‘Spider-Man’ delivers in the best way possible. Complimented by a unique comic book tone, hilarious script and an incredible portrayal of Mysterio by Jake Gyllenhaal, ‘Far From Home’ exceeded my expectations.

I know Tobey Maguire is the original live-action Spider-Man, but Tom Holland has firmly supplanted him as my favorite. He embodies the young, neighborhood, humorous feel of the character perfectly. The balance of comedy, emotion, and action was better than in ‘Homecoming’ in my opinion for the character of Spider-Man and I believe it was the best portrayal of the web-slinger in any movie involving him. I can’t think of a better actor or character to lead the next chapter of the Marvel Cinematic Universe.

Now let’s talk about my guy Jake Gyllenhaal and his character, Mysterio. There is a ton of “mystery” (no pun intended) around the character, so I won’t get too much into it, but Gyllenhaal, as expected, nails the role. Anything involving Mysterio became a spectacle on screen and had me on the edge of my seat. It’s a character, presence, and motive that we haven’t really seen in the Marvel Cinematic Universe and, as a result, is a breath of fresh air. My bias for Jake G. might be showing, but I truly think everyone will walk away wowed by his performance.

The story and script are both better than its very strong predecessor. There were some legitimate laugh out loud moments and entire scenes. The vibe with Spider-Man movies should be different and they’ve now found a way to capture that twice. All of the action pairs nicely with the down to earth, humanizing, emotional scenes and all of Peter Parker’s friends and acquaintances (played by Marissa Tomei, Jon Favreau, Zendaya, Jacob Batalon and more) continue to rise above just being bit side-characters. There is one one-on-one fight scene that might be my favorite in all of the Marvel Cinematic Universe movies. If I were to complain about anything, I would say that it feels a little stretched out in parts, but it didn’t bother me all that much.

SIDE NOTE: Best mid-credit scene in any of these movies and it’s not even close now… my theater’s audience gasped and freaked out…

There are so many twists and turns in this movie that you should do your best to avoid spoilers. ‘Spider-Man: Far From Home’ is the perfect end to Phase 3 of the Marvel Cinematic Universe and arguably the best Spider-Man movie to date.

KenJac (90/100): We talk about it all the time on LCB, making a sequel to a successful movie is hard to do. It’s an uphill battle from the start, and yet ‘Spider-Man: Far From Home’ succeeds in taking what made the original great and making it better in some respects.

The returning cast is as charming and hilarious as always, and the addition of Jake Gyllenhaal was an absolute delight. It’s hard to explain how he nails his performance without spoiling the movie, but suffice to say he does a great job.

This plot was very dependent on visuals and the SFX department earned their paycheck. The suits, bad guys, and powers all looked fantastic in some huge scale battle sequences. My only issue with this movie compared to the original is that it definitely felt a tad bit too long. ‘Spider-Man: Homecoming’ zipped right past while there was for sure a point in this movie that I was curious when they were going to start wrapping things up.

It’s a great MCU fix for all of us coming off the high of ‘Avengers: Endgame’ in addition to being an independently great film. Also, the post-credits sequence? Infinite eye emojis.

—
‘Spider-Man: Far From Home’ is Officially Buttered even without Trillballins’ and the Audience’s score. Tune in to this week’s Lights, Camera, Barstool for our full review of ‘Toy Story 4′ and ‘Child’s Play’.